The city of Christchurch, which is New Zealand’s gateway to the South Island, has spent the past seven years rebuilding and reinventing itself whilst at the same time remaining true to its English heritage.

For Andrew Hallinan, representative for Waterloo, NSW, the opportunity to see for himself how the city has rebuilt itself since the devastating 2011 earthquake gave him a newfound appreciation for the destination.

“I previously knew very little of Christchurch and its surrounds,” Hallinan explains.  “I will now be happy to encourage clients to head north to the Waipara Valley, where I can recommend some great North Canterbury vineyards to visit.” 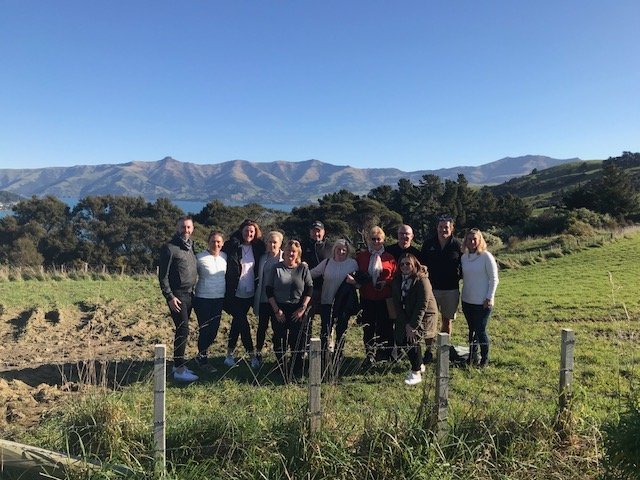 Wine wasn’t the only local speciality on offer during the group’s first afternoon: they also took part in a truffle hunt before sampling the region’s culinary highlights at Black Estate: a family-run vineyard, cellar door and restaurant in Waipara that boasts exquisite wines and an organic, free-range seasonal menu.

“I would return to this region without hesitation,” enthuses Hallinan.  “It's close enough to home that you can pop over for just a few days, but different enough to feel like a holiday.”

The day concluded back in the city with drinks at Kong – a glamorous, 1930s-styled cocktail lounge – followed by a “social dining experience” at The Monday Room.

Continuing with the culinary theme on Day Two, the group were whisked to the French-influenced settlement of Akaroa, which sits on the shore of Akaroa Harbour, nestled within the remnants of the vast, ancient volcano that is now known as Banks Peninsula.

Despite being located just a ninety-minute drive from downtown Christchurch, the group were treated to a much quicker and more dramatic journey, in the form of a scenic flight provided by Christchurch Helicopters and piloted by none other than former All Blacks captain-turned-pilot, Richie McCaw.

“The helicopter transfer was an amazing opportunity to see how spectacular the Christchurch region is from the air,” reports Lee-Anne Talbot, who is representative for Lake Munmorah, NSW, adding that making the journey by road would still allow for an easily-manageable day trip, either on a tour or self-drive itinerary.

Once in Akaroa, Black Cat Cruises hosted the group on a two-hour cruise of stunning Akaroa Harbour, which PTM Fiona Perry says allowed them plenty of time to admire the majestic scenery and unique wildlife, which includes penguins, other sea birds and the native, endangered Hector’s Dolphin.

“Our skipper had such an extensive knowledge of the nature, wildlife and history of the harbour,” says Perry, who is representative for Red Hill, ACT.  “Wandering around the town of Akaroa itself was a lovely way to spend the morning after to our cruise, soaking up the French-inspired atmosphere before sitting down to another amazing lunch at a local restaurant.”

The group’s whirlwind tour concluded with a road transfer back to Christchurch Airport, which gave them plenty of time to soak up the beautiful Banks Peninsula landscape and reflect on their time in Canterbury.

“It was great to see the recovery of Christchurch post-earthquakes, which I can now relay to my clients,” says Talbot.  “From fantastic new entertainment options to the restaurant precinct that’s now open along the river, Christchurch is a great option for a luxury weekend getaway.”

Photo caption: Stunning Akaroa Harbour provided fantastic scenery, wildlife and dining for eight TravelManagers PTMs on their famil to Christchurch and surrounds. How many famils include a helicopter transfer piloted by former All Blacks captain Richie McCaw?