Thirty top-selling travel agents from across Australia and New Zealand have just returned from a spectacular adventure in Spain and Portugal thanks to Globus and its 2016 Supertour. 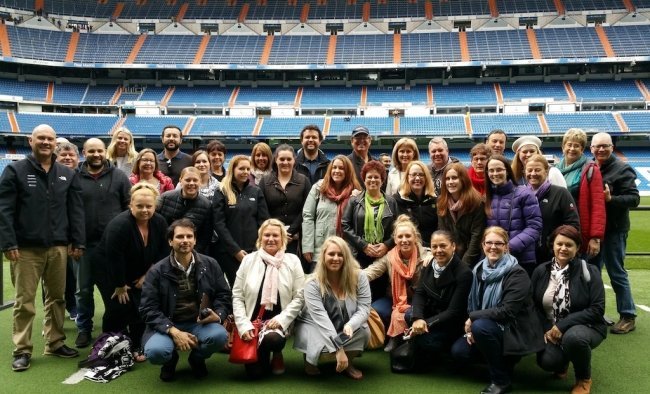 This year’s Supertour involved an 11-day itinerary through some of the most colourful destinations on the Iberian peninsula, including Barcelona, Madrid, Toledo, Seville, Setúbal and Lisbon.

As special surprise, the group was taken to a football game between Barcelona and RCD Espanyol, wearing personalised jerseys made especially for the agents. Barcelona won the day 5-0.

The expedition was offered to 20 agents from Australia and 10 from New Zealand as a reward for their sales of Globus, Cosmos, Avalon Waterways and Monograms holidays.

The Supertour was based on the Globus Iberian Tapestry itinerary, one of dozens of tours in the Globus 2016 Europe program.

Photograph: The Globus Supertour group at their surprise football game between Barcelona and RCD Espanyol, part of an 11-day adventure in Spain and Portugal for 30 top-selling agents from Australia and New Zealand.