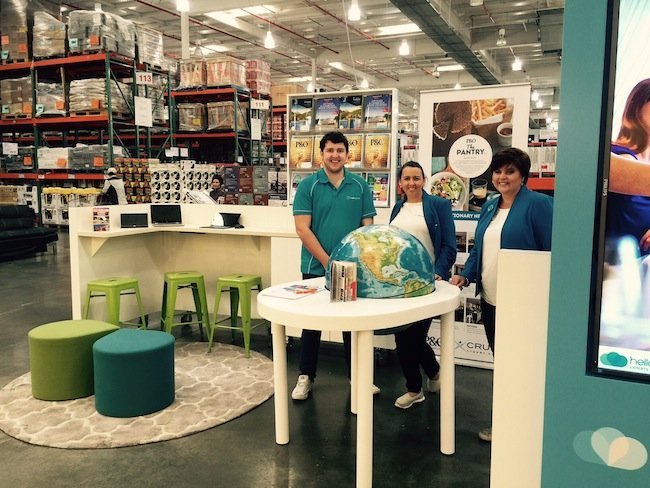 Before Costco came to Australia, the US membership-only warehouse club was a tourist destination in itself for in-the-know Aussies who would post pictures of ‘bigger-than-my-head jars of peanut butter’, gape at the thought of buying a coffin from the same store that sells super cheap alcohol (some also sold in bottles bigger than your head), and feed their tourist appetites on cheap hot dogs and free samples.

Now Aussies are getting the chance to sample a travel agent’s offering as helloworld Hunter Travel Group set up a pop-up shop over a successful 12 days within Costco Auburn in New South Wales. Following the success of the first store, a 12-day pop-up store is currently on at Costco Crossroads/Casula.

“We were very pleased with the high number of quotes, giveaway entries and the sales that were generated from our [Auburn] pop-up store,” helloworld Hunter Travel Group managing director Brett Dann said.

The initiative has highlighted the importance of travel agents going to where consumers are, helloworld Hunter Travel Group general manager Shaun Houston said.

"As a membership based retailer the people who shop [at Costco] are very loyal customers. The Auburn store alone sees 15,000 to 20,000 people a week walk through their door. That kind of volume is something we could never generate as a stand alone business so it is very important."

"To go where potential customers are and generate buzz is so important in not only attracting new customers but also showing loyal customers we are innovative and getting out there. The fantastic branding of the pop-up store and our friendly, helpful staff popping up in a local Costco is proving to be a huge success!"

Costco sales in Australia have increased rapidly as its seven warehouses have rolled out into Victoria, NSW and Queensland, with annual revenues almost tipping $1 billion, the Australian reported.