Honolulu locals and tourists alike were probably somewhat bemused by the sight of more than 300 Australian personal travel managers (PTMs) and partner suppliers running around the streets of Waikiki on Saturday afternoon, many of them strangely attired and all of them having an inordinate amount of fun.  This was TravelManagers’ version of the Amazing Race: a welcome break from the serious business of their annual national conference, which ran for three days over the past weekend.

According to TravelManagers’ Executive General Manager, Michael Gazal, the race was designed as a fun, team-building exercise that would allow participants to explore Honolulu, discovering the sights and tourist attractions and seeing for themselves how easy it is to walk and catch public transport around Waikiki. “We had 38 teams of eight or more participants, each of which had a list of up to twelve challenges to complete,” Gazal explains.

The teams were given a budget of just USD40 dollars each, which had to cover their transport costs, team costumes and any items they were required to purchase as part of the challenges.  Participants were also required to photograph each challenge and post the results to social media, using the conference’s #TM2018HNL hashtag. Prior to heading out on the Amazing Race activity, conference participants had spent the morning engaged in a series of workshops, which included how to use technology to grow their businesses, the importance of creating the right headspace and a wellness workshop presented by Altius Group CEO, Derick Borean.

“Having spent a fairly intense morning working on the more cerebral aspects of running a successful business, it was great to get outside and just enjoy each other’s company and the amazing destination we’re in,” says Karin Evert, representative for Strathmore, VIC. After two and a half hours, teams returned to their conference base at the Prince Waikiki to compare experiences at an evening cocktail party.

Day Three picked up where Day One left off, with further presentations from PTMs and suppliers.  Julie Painter and Michelle Schulze talked about creating ‘Ladies Escapes’: a specialist small-group tour business which has taken a number of groups to Fiji and to Vietnam.

“Our successful collaboration has come from sticking to five main principles,” Painter explained to the audience.

“1) having strengths and weaknesses that complement each other; 2) understanding that honesty builds trust; 3) the value of brain storming; 4) the importance of supporting each other; 5) the magic of compromise.”

For the first time this year, a representative from the National Partnership Office also gave a ‘Secrets of My Success’ presentation.  The company’s Digital Marketing Manager, Tania Myles, who claims to have been terrified of travel agents when she started in the industry, talked about landing her "dream job" at TravelManagers.

“When you surround yourself with the right people, you understand your worth and what you can achieve,” she explains, adding that the individual success stories to which she has contributed are her biggest motivator.

“And I’m not afraid of travel agents anymore!” 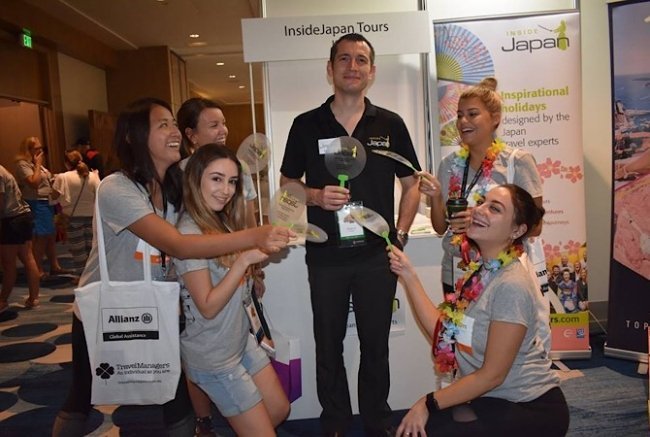 The conference was formally closed by Gazal at 5pm on Day Three, but not before one of the most eagerly-anticipated presentations of the conference: an address by Turia Pitt.

“Turia is one of Australia’s most inspiring and sought-after speakers, so we were absolutely thrilled that she agreed to join us in Hawaii,” says Gazal.

Pitt’s story is well-known to many Australians: she suffered burns to 65 percent of her body when caught up in a fire during an ultra-marathon in 2011.  After her accident, she decided to focus on what was directly ahead of her instead of looking too far into the future, enduring an arduous journey of rehabilitation to achieve her goal of completing an ironman race.

Having started her presentation by asking the group to perform a few squats, Turia went on to explain why she considers an ironman race to be a great metaphor for life: the more you put into it, the more you’ll get out of it.

“Turia emphasised that if you can get your mindset right, working for you and not against you, you become unstoppable,” Gazal says.