The Golden Triangle is the moniker given to the region marked by three of India’s northern cities: Agra, Jaipur and the nation’s capital, Delhi. TravelManagers recently provided eleven personal travel managers (PTMs) with the opportunity to join a seven-day famil of this 720-kilometre circuit, which is renowned for its collection of incredible palaces, forts, mosques and mausoleums, as well as its vibrant history and culture. For many, it was their first visit to India, and an invaluable chance to experience it first-hand. 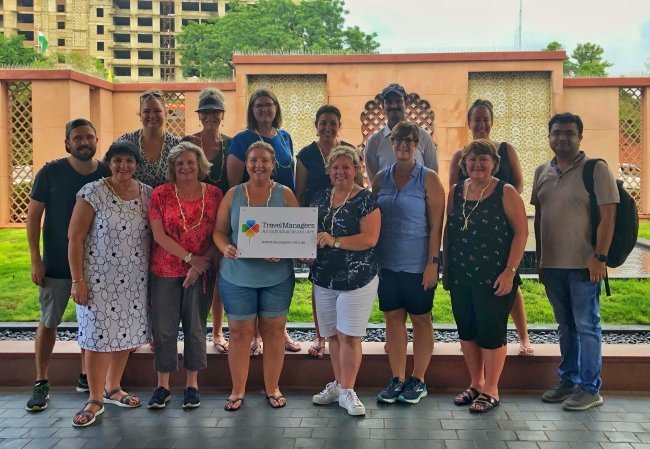 “Having a clear understanding of the various places of interest, the weather, the culture and the food will definitely help me to manage the expectations of clients planning to visit India, so that they have the maximum possible enjoyment of the destination,” notes PTM Tanya Patterson. “India is not the sort of destination that I would recommend visiting independently, and having that first-hand knowledge makes it much easier for me to sell.”

No two days are alike in India,” adds Kerstin Rheinlander, who is TravelManagers’ representative for Sinnamon Park, QLD. “It’s a very diverse country and challenges your senses in every possible way, but if you make the effort to really appreciate what this country is all about and learn about its history, culture and way of life, you will be rewarded with an incredible travel experience.”

The group began their itinerary in the city of Delhi with a tour of both the ancient and modern sections of the city, taking in Jama Mosque (the largest and most well-known in India) and the Red Fort, which was constructed in 1638. They also took a rickshaw ride through Chandni Chowk – the city’s oldest marketplace is considered one of the world’s busiest.

The following day, their itinerary headed south to the city of Agra, home of the Taj Mahal, where they attended an evening show that told the story behind this magnificent monument. The participants described this as an ideal introduction to the main event – an early morning visit timed to coincide with the sunrise.

“What a ‘wow’ moment,” Rheinlander reports, “walking through those gates and seeing the Taj Mahal, bathed in the glow of the rising sun – it gave me goose bumps. I could feel the deep love the Maharaja had for his wife – it’s almost engraved into the building.” Patterson also describes the dawn visit to the Taj Mahal as having significant ‘wow’ factor: “I think the story of how it was built and what happened along the way and what happened in the end was the emotional part for me,” she explains. “To watch the sun’s rays reflecting off the marble façade and know that I had finally seen this magical place with my own eyes was something that will stay with me forever.”

The famil participants concluded their time in Agra with a visit to the Agra Fort – a collection of richly decorated buildings that showcase the Mughal style of art and architecture and provide great views of the Taj Mahal on the opposite side of the Yamuna River.

The third point of the Golden Triangle was the final stop on the famil: the Pink City of Jaipur. Founded in 1727 by Jai Singh II, the Raja of Amer, its nickname comes from the dominant colour scheme of its buildings. One of the highlights in this city was the Amer Fort, which was the region’s capital prior to the construction of Jaipur itself.

“Amer Fort, also known as the Amber Fort, sits high on a hill in Jaipur – an amazing sandstone and marble palace, with courtyards, gardens and residences for the royal family,” explains Patterson.

“The artwork throughout the fort was impressive, particularly the walls and the ceiling of the Mirror Palace, which is embellished with glass inlaid panels and mirrors that would have looked stunning when it glittered in the candlelight.”

The famil, which was exclusive to TravelManagers and hosted by K J Slater of China Travel Services, served as an appetiser for the participants, all of whom have expressed a desire to make a return visit to India. Jo Patton, representative for Ulladulla, NSW, posted her progress around the Golden Triangle on social media, generating such strong interest that she has already filled two private group tours from her client base.

“Seeing India for the first time myself was fantastic, and I can’t wait to make a return visit to share it with my clients.”