In the shadow of the volcano, without Pierce Brosnan

Managing editor Jon Underwood is shaking in his bed, in PNG. 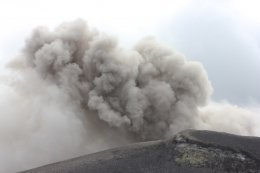 I've had some strange and unwanted wake-up calls in my time. But when the room starts shaking at 7am, it certainly gets you out of bed.

I was staying at the Kokopo Beach Bungalow Resort in Papua New Guinea and the source of the unexpected alarm call was Tavurvur, a very active volcano. The shaking only lasted a few seconds but it was more than enough to get my attention.

So you'd probably think the smart move would be to stay clear of such an angry force of nature?

Two hours later, I was standing at the bottom of said volcano, watching steam spew forth from the crater and several hundred feet into the air. The volcano erupted in 1994 but to look at it from this close you'd swear it was about to clear it's throat once more.

Where's Pierce Brosnan when you need him?

But we survived the wrath of the volcano and spent a very enjoyable day touring East New Britain.

Tomorrow it's off to Port Moresby ahead of a major trade fair. Hopefully without any unforseen early morning surprises.