It’s a ceremony that few westerners have ever witnessed. Here, HELEN POWER reports on the bull jumping ritual of the Hamar tribe in Ethiopia.

It is a warm sunny day in the Omo Valley in south west Ethiopia and we are standing in a dry river bed at the edge of a large gathering of people from the Hamar tribe.

It is the end of the dry season: the sorghum harvest has taken place and the rains which will fill this riverbed are about three weeks away. And it is at this time of year that a special event in the lives of young Hamar men takes place: the bull jumping ceremony that marks the rite of passage from boyhood to manhood and with it the right to take a wife. We are privileged to be here to witness this very special ceremony.

We arrive at this place via 4WD vehicles that lurch and bump through a couple of kilometres of dirt track. The final few hundred metres are on foot, through thick bush, before emerging into a clearing with the riverbed ahead.

Women of all ages, young children and young Hamar men are already gathered in groups, with many of the young women wearing bells strapped to their legs and tooting on ceremonial horns, as they dance and sing in the lead-up to the ceremony proper.

The women are adorned in animal skins, brightly-coloured beads and brass bracelets and jewellery, with their hair tightly braided and smothered in a mixture of red ochre and butter.

The young men are bare-chested, with tightly wrapped fabric tied at their waists in a kind of skirt.

The young bull jumper watches the proceedings, then wanders off to sit in solitude a little distance away, doubtless contemplating the task ahead. 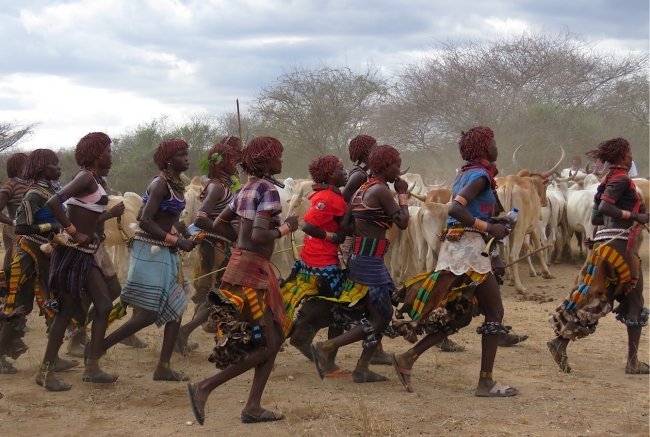 If he successfully jumps across the line of bulls, the celebrations will continue for several days and his family will be proud. The family wealth is measured in cattle and sorghum – a grain crop that provides food and also a kind of beer – and it costs 20 to 25 cattle and many bags of sorghum to put on this ceremony.

If the young man fails to jump onto the bulls’ backs, or falls from the bulls, it is a source of great shame and he must slink off into the bush until he dares to show his face again.

Six bulls are set in place and the jumper, now naked except for two pieces of flax tied across his chest, stands before them with a hint of apprehension.

He turns, walks away, then swings around and runs up towards the line, leaping onto the first bull and stumbling across the bony backs of the others, before jumping triumphantly to the ground on the other side.

Grinning now, he makes a second jump, then a third, then the fourth and final jump. All are accomplished well, with strength and agility, and at the end of the final jump the dancing, chanting and tooting of horns by the young women of his tribe begins again in earnest.