Specialist UK Northern Lights travel company, Off the Map Travel, has come up with some new novel ways for Australians wanting to tick the Northern Aurora off their bucket list. 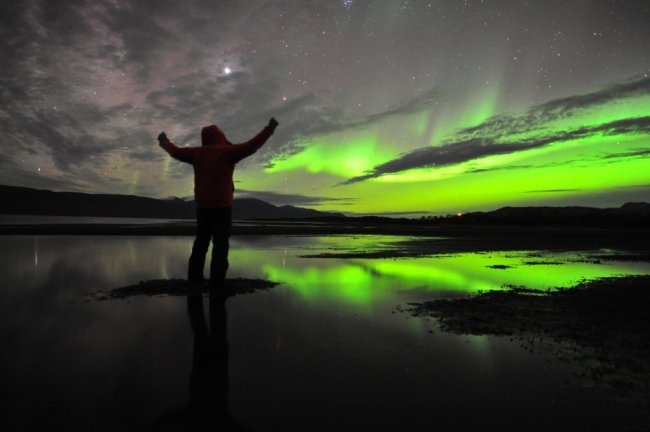 Off The Map Travel Director and Northern Lights expert Jonny Cooper, who has taken thousands of people into the Arctic to experience the phenomenon, says the season runs until March, so there is still plenty of time to get out into the Arctic.

Here are his expert tips for the best five ways to see the lights:


1) While floating in a secret Icelandic thermal lagoon

In Iceland in the first experience of its kind ever developed, you can watch the lights while floating around a secret Icelandic thermal lagoon while enjoying an in-water massage and listening to relaxing underwater music.  Built in 1891, the lagoon is one of Iceland’s oldest swimming destinations, with its geothermally heated water held at a year round temperature of 38-40 degrees Celsius.  Jonny says as well as seeing the lights there are the added health benefits of floating which range from helping with pain relief to easing depression and anxiety. http://www.offthemaptravel.co.uk/aurora-floating-iceland/

2) While part of a wellness retreat

In Finland, those interested in all round wellness should head to the remote Finnish destination of Kilpisjärvi.  As well as the chance to see the Northern Lights, there’s yoga, exercise and relaxation techniques, hot tub and ice hole experiences and a nutritionally designed diet using local recipes and local produce. There’s also the opportunity to delve into the local and international Sami beliefs around the Aurora.

3) While giving chase with the ‘Aurora Addicts’

Give chase across the Arctic Circle in Norway with the ‘Aurora Addicts’.

The family of six is addicted to the Northern Lights and after seven years of hunting the lights on holidays to Iceland, Finland, Sweden and Norway, they undertook the ultimate Northern Lights pilgrimage taking their seven metre long motorhome for five months chasing the Aurora across Lapland.   The ‘Aurora Addicts’, Chris, Becki and their children, have honed their skills in reading both the Aurora and weather patterns to predict the best spot to experience the Aurora, and once they have the coordinates – the chase is on.  As well as chasing the Northern Lights, there’s the chance to join a dog sledding adventure, meet the Sami people, go to a local reindeer farm or go to the small fishing villages of Langoya and Nyksund.

4) Watching from the comfort of a glass roofed Snowcat

Based in Kilpisjarvi, Finland, the Snowcat takes away any challenges of finding the clearest, darkest skies in remote and wild Arctic regions – where there are the best views of the lights.  One of places the Aurora Snowcat can travel is the three boarder point. This gives you the opportunity to travel out to the stone monument deep into the remote Arctic wilderness, where you can experience the Northern Lights from Finland, Sweden and Norway - simultaneously.

5) Glamping in the Arctic

When it comes to bunking down for the night, forget the swag – it’s glamping all the way.  The Aurora Village overnight experience will see you staying is one of three traditional Swedish ice-fishing huts on the banks of a frozen lake in Northern Sweden.   The huts, traditionally used by ice-fisherman in the region during the Arctic Winter, have uninterrupted views of the greatest light show on earth, but Jonny says they are “cosy, heated and insulated”.  If that’s not glamping it enough, there’s the Aurora Safari Camp – five traditional Sami Lavvu rooms (traditional Arctic tepees) purpose built on the banks of the Råne River in northern Sweden.  With log burning stoves in all of the rooms, the Lavvu rooms stay warm and cozy and an open fireplace outside provides views over the river and up through the trees to spot Aurora.   Backed by a forest caped mountain there is plenty of wildlife for neighbours including moose, red fox, reindeer, bears (which hibernate in the winter) and roe deer.