Orion's a new star in the sky

Traveltalk’s Jon Underwood is aboard Viking Orion, the cruise company’s latest ocean ship as she sails from Venice to Rome.

There are three little words that can turn a good cruise ship into a great cruise ship. No, it’s not “unlimited beverage package”. It’s “attention to detail”.

Aboard Viking Orion, the ATD is off the nautical charts. From the leather handrails to the intricate tapestries to the heated bathroom floor, everything has clearly been scrutinised to the Nth degree.

I was lucky enough to get a sneak peak at the cruise company’s ocean offering when Viking Sun visited Sydney earlier this year. The opportunity to join Viking Orion’s ‘Italian Sojourn’ itinerary from Venice to Rome offered the chance to actually experience the ship at sea. 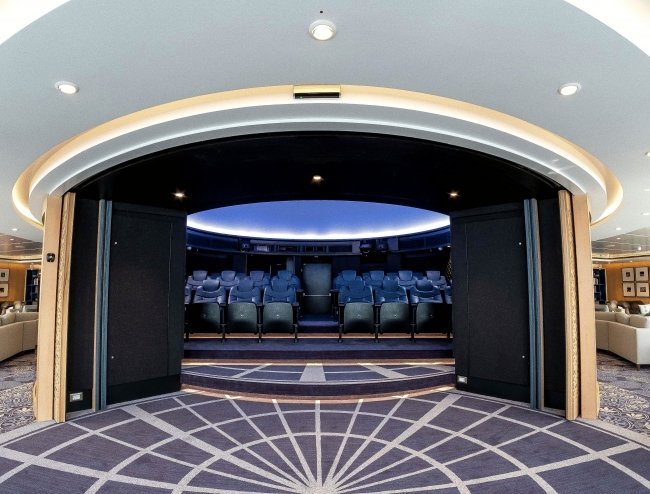 The first thing you notice once aboard is how light and spacious the interior feels, testament to the modern, Scandinavian design. Being a brand new ship, the furniture and fittings are in pristine condition and Orion still has that ‘new ship’ smell. The absence of children (under 18) adds to the overall sense of calm that immediately puts guests at their ease.

Our penthouse verandah was on the sixth deck and afforded plenty of storage without compromising the space available. Once unpacked, the suitcases disappeared under the extremely comfortable king size bed, replete with luxury linens and pillows. Every cabin aboard Orion comes with a balcony, allowing all the guests to sit outside and just watch the world sail by.

The cabin also benefits from some innovative touches, including the aforementioned heated floor, handy bedside dimmer switches and a pop up dressing table mirror that allows ladies to primp and preen without having to perform circus-style contortions in the bathroom.

Dining options are plentiful, from the convenience of the World Café to the specialty cuisine of Manfredi’s and The Chef’s Table. There’s a spa, fitness centre, large theatre, sports deck, pools and an Explorers’ Lounge that comes complete with its own planetarium, a nod to Orion’s Godmother, former NASA astronaut Dr Anna Fisher.

That spirit of adventure also permeates into the extensive list of shore excursions that Viking offers, keen to promote the various destinations that Orion visits. While the ship is ultra luxurious, the company hasn't forgotten the basic rule of cruising that people onboard a ship actually do want to get off and explore the countries they are visiting. Said excursions are comprehensive, some are complimentary, and all are run with military-style precision.

Viking is very much a family business, grounded in its Norwegian heritage. That they have managed to replicate these values into the design, layout and atmosphere of a ship speaks volumes for the brand and its ideals. WIth Orion, they truly can shoot for the stars.

The 930-passenger Orion is the fifth ocean vessel launched by Viking and the eight-day ‘Italian Sojourn’ tour encompasses Venice and Croatia, calling at Bari, Sicily and Naples before ending in Rome. She will initially sail in the Mediterranean before heading east to sail in Asia and Alaska, arriving in Australia in December.