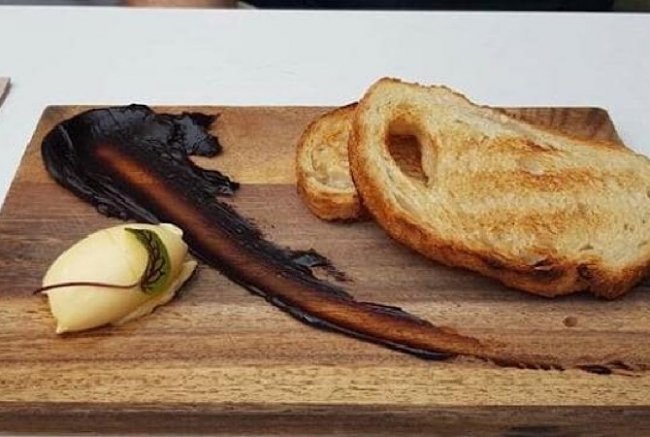 Just when we gave up our avocado on toast in favour of paying mortgages, Australians have now been stung by a shocking $7 Vegemite toast. Forget the air strikes on Syria, this is big.

Yes, with its beetroot lattes (turmeric was so 2017) and poke bowls, Core Espresso in Newcastle likely caters to those of the hipster persuasion. But according to Facebook reviews it has some pretty top coffee and the service is seemingly unparalleled.

So of course at a place that charges $8 for some sourdough and butter, your simple Vegemite on toast is 1) likely to be pricey and 2) anything but simple.

The toast is, of course, served on a wooden board. In MasterChef terms, a ‘quenelle’ (a delicate football shaped scoop often seen performed on cream) of butter is placed on the opposite end of the board and between the two is a generous smear of Vegemite.

But before you cry deconstruction, Core Espresso’s manager Emma Reid told News Corp there’s a practical reason behind the presentation.

“If someone orders toast and they want Vegemite, we want to make sure it is presentable and that there is enough Vegemite on there. We don’t skimp on Vegemite,” she said.

Aha! I like it! There is only one person who can make Vegemite toast to my liking. Me! I’m a lashings of butter and a teeny scraping of Vegemite kind of girl and only I can get those proportions right.

But would I pay the reported $7 for the privilege of making my own toast? No. I’d rather put that money towards some of the other tasty and nutritious offerings on the menu.

And it seems social media agrees, with many calling the serving “ridiculous”.

“This is not on. This upsets me,” one person commented.

“Seriously??? Hahahaha by the time it gets to your table the toast will be cold ... dry veg toast,” wrote another.

“The toast would be well cold by then, the butter wouldn’t melt. What a s**tfight,” someone else said.

Ah well, back to the chopping board...oh, wait.