MARK HARADA visits ‘hell’ in one of Japan’s most famous onsen towns, where, thankfully, the only demons he encounters are of the cardboard cutout variety. 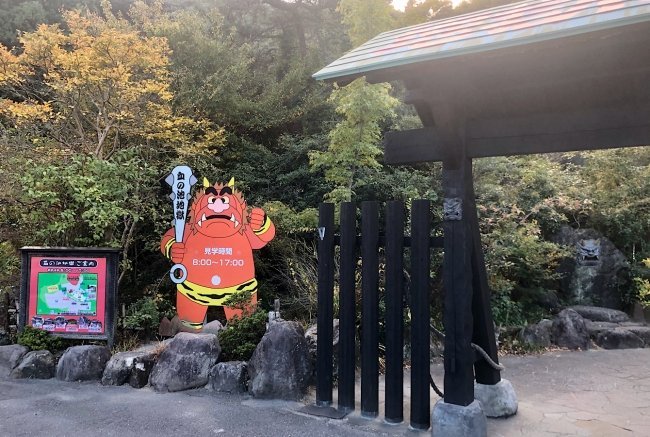 I’ve come to hell ... and I had to walk through a souvenir shop to get here. No, I haven’t sold my soul for the endless sweets I’ve come across in Kyushu, or gone looney from a local zaru (monkey) bite. This place, in name at least, is hell.

Actually, as my guide Atsuko Oda points out, there are numerous hells around here. Seven in fact, and you can visit them all quite quickly with a booklet of tickets.

What I’m talking about, as I’m sure you’re wondering, are the hot springs of arguably the most famous onsen city in Japan, and one that produces more hot spring water than any other resort in the country: Beppu. 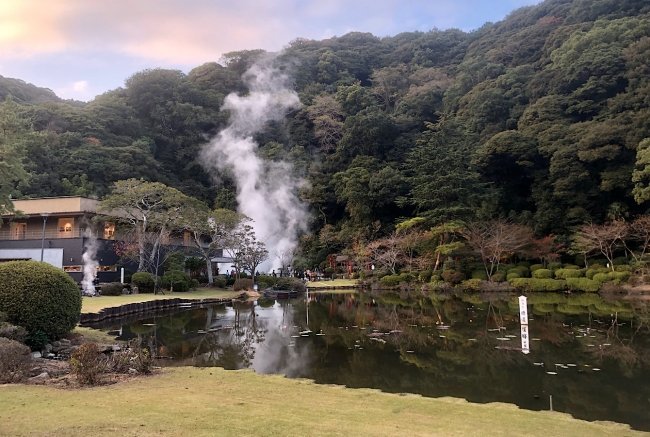 The Jigoku (Hells) of Beppu are steaming ponds whose names derived from their volcanic water, bubbling mud and gas expulsions. And each has its own unique feature. But these aren’t the onsen you bathe in - although many of the more than 2,000 onsen in Beppu offer that too.

For centuries, it was feared the land here was cursed, so people stayed away. Now, the Jigoku are popular tourist attractions.

At Umi Jigoku (Ocean Hell), a small crowd gathers around a large steaming spring with the kind of azure water you would expect to find in the tropics. Though snorkelling here is inadvisable. 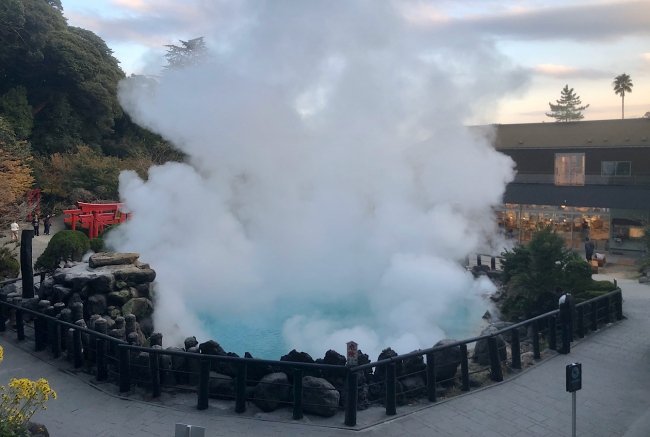 If your camera lens doesn’t fog up, it’s a highly photogenic place made even prettier by the neighbouring Hakuryu Shrine and its red tori (gates). A quick prayer here is said to bring families luck - in health, wealth and supposedly on the roads.

A short walk from the shrine, there’s an outdoor foot bath whose water comes straight from the springs. It’s nice and hot, but you certainly wouldn’t want it any warmer. 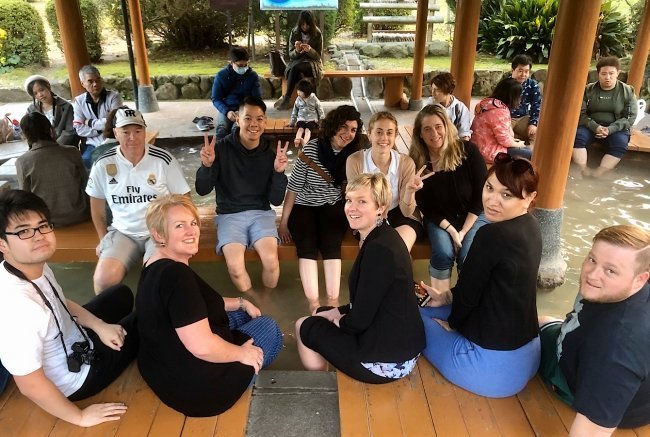 A foot bath for the JNTO famil guests

Elsewhere at Umi Jigoku, there are outdoor and indoor lily ponds, a gallery dedicated to the hells, and Restaurant Umi, whose specialty is udon and champon noodles.

More food, of the souvenir and sweet variety, can be found at Shop Ren, while Gokuraku Manju serves delicious bite-sized cakes steamed by the hot springs. 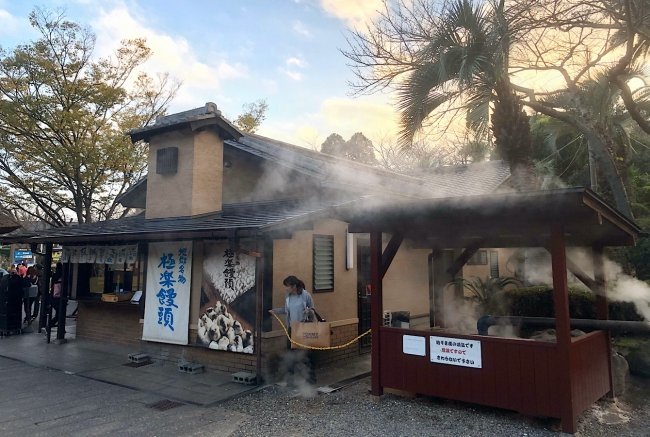 But other hells await, like Chinoike Jigoku. Here, steaming clay turns the water red, giving it the most demonic look of all the hells. Check out the renowned Chinoike Ointment here too, which is made from the local clay and apparently awesome for your skin.

Next door to this, a geyser attracts a sizeable crowd as it regularly sprays up boiling water at Tatsumaki Jigoku, while Shiraike Jigoku’s ‘White Pond Hell’ boasts almost colourless water in another beautiful setting. 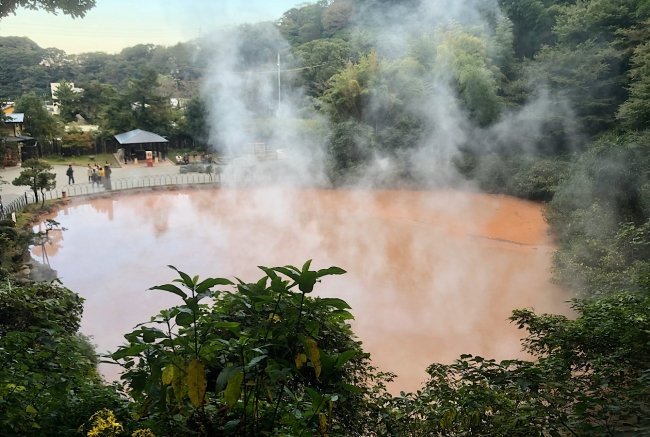 Over at Oniishibozu Jigoku, bubbles of hot grey mud resemble the shaven heads of monks. But possibly the most unusual hell is that of Oniyama Jigoku, where crocodiles have been bred since 1923 using the high temperature of the hot spring water here.

As I’m driven around the outskirts of downtown Beppu - or even just look outside the window of my room at Hotel Sansuikan - I see numerous plumes of steam rising up around the city. It’s a mesmerizing, almost surreal sight. But in a place where seven hells exist, you would expect that. 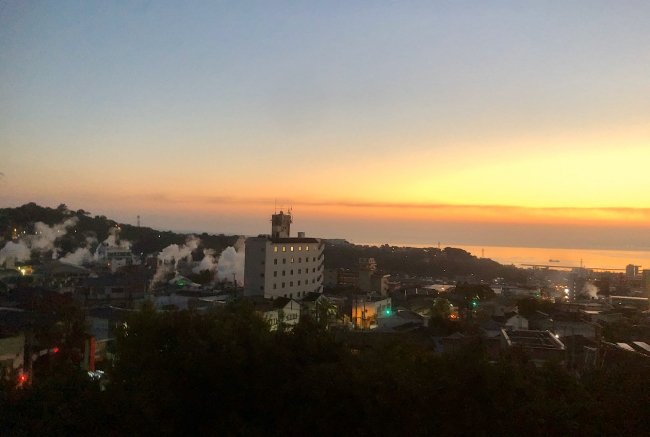 View of Beppu from my room at Hotel Sansuikan

While you’re here ... A short drive from Beppu city, Takasakiyama Monkey Park is home to some 1,500 Japanese zaru (macaques), who have free rein in a hillside forest and manmade area, where the monkeys are occasionally fed. This attraction makes for some great photos, fun and supposedly good luck when a monkey runs between your legs - a real possibility at feeding time.

While in Beppu, the writer stayed at the traditional Hotel Sansuikan onsen resort and the seaside Hotel & Resorts Beppuwan. 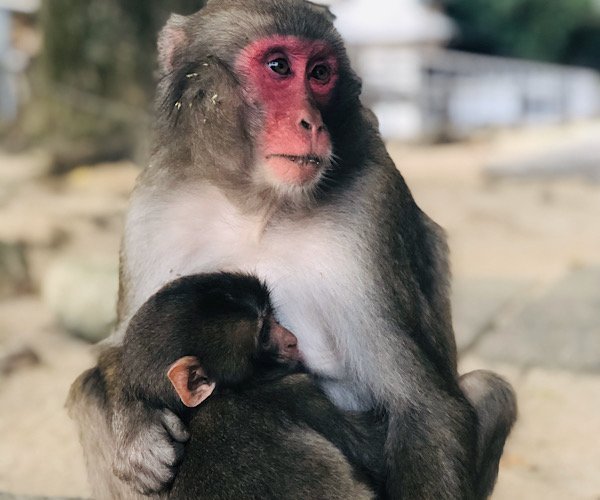