What's the most annoying thing about flying? Apparently it's other passengers.

With an increasing number of budget airlines making air travel more accessible to wider range of people, it appears that one of the things we hate the most about flying is… other passengers.

Unless you own a private jet, chances are when you board a plane, it will be full of strangers.

And those strangers come with plenty of annoying habits, like talking too much, hogging the seat, not boarding fast enough or bringing far too much carry-on baggage (how do they get away with it?)

Other passenger crimes also include eating smelly take-away food they bought just before boarding, using your shoulder as a headrest, snoring, climbing over you to go to the bathroom every 10 minutes – and don’t get me started on seat-kickers.

To a certain extent, you just have to grin and bare it for the duration of your flight – although you can politely ask your seatmate to move if he or she is crowding you.

And for those frequent bathroom breakers, you can always offer to swap seats to give them better restroom access. Just remember: the flight will not last forever.

In a survey conducted by Travelzoo recently, 68 per cent of Australians said that screaming kids are the biggest irritation during a flight.

Which I expect is why some airlines are introducing quiet zones, or child-free zones. If the plane isn’t full, you could just ask to be moved further away surely?

And then of course there are the seating arrangements. Airplane seats and sofas do not have much in common. Many passengers say cramped seating on planes is the most annoying part of flying.

As airlines attempt to squeeze more passengers into their cabins the amount of legroom has shrunk. Which I expect prompted the 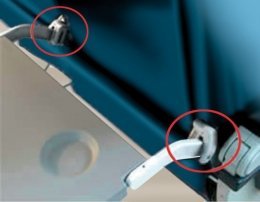 Behold: the knee defender invention of a little gadget called the Knee Defender.

This delightful little gadget allows you to “to sit in a limited economy class seat without fearing the dreaded moment after full ascent when the seat in front of you pushes back to touch your nose.”

The small rubber clips attach onto your tray table inhibiting the seat from moving from its upright position. Trust me, there will be arguments.

Really, this is about flying etiquette - sure, you can recline your seat, just do it gently and perhaps with a small apology to the person behind you, to show you care (a little) about their personal space.

If you can’t afford a fully-reclinable seat in Business or First class, maybe we could fall back on the old notion of consideration for other people.

The following comments were posted on website Sodahead responding to an article about the increase of "Air Rage". I think we've all experienced some of these!

Typical stupidity I see every week on planes: