Imagine receiving a goose as a wedding gift, or how about being barred from using the toilet for three days?

These are all real-deal wedding traditions from far-flung destinations, uncovered by Cheapflights.com.au. 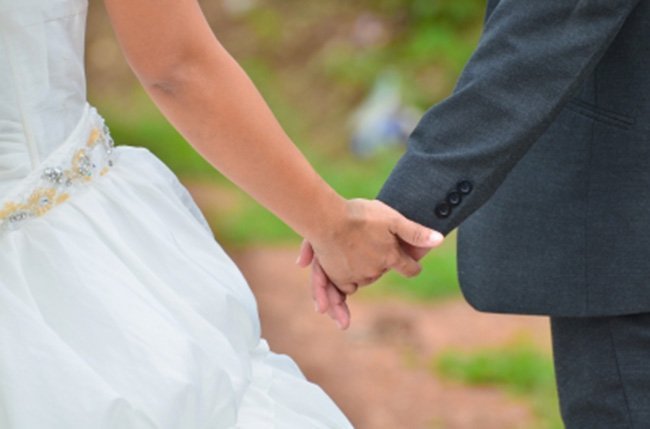 The travel search comparison website scoured the globe to compile a list of nine wacky wedding day rituals, most of which make ‘something old, something new, something borrowed, something blue’ seem like a snooze fest.

Traditionally, the groom gives his new mother-in-law ducks or geese. Since both mate for life, the gesture is meant to symbolise his fidelity. Today, the live birds have been replaced by wooden ones and are exchanged by the bride and groom during the wedding ceremony.

Before entering the mandap – a canopied structure where the priest marries the couple – the bride and groom remove their shoes. The bride’s sisters or cousins then steal the groom’s shoes, which he then ransom’s back allowing him to leave the mandap in the same shoes he arrived in.

While the origin is unknown it’s thought that perhaps the tradition dates back to ancient times when weddings were held in temples – removing shoes before entering was mandatory.

During wedding receptions in Denmark, male guests hoist the groom into the air after the bridal waltz. Removing the groom’s shoes, one of the guests then takes a pair of scissors and cuts off the end of one of the groom’s socks. Some say the tradition represents the fidelity of the groom to his new bride while others say it’s to reveal the bride’s sewing ability.

This one sure beats the western tradition of bouquet throwing! Female guests gather around the wedding cake and take hold of a white ribbon, which has been baked into it. One of the ribbons has a ring attached to the end and the woman who pulls on that string will be the next one married. The newlyweds then cut the cake.

Once married, members of the Tidong people are put under house arrest by friends and relatives who stop them from going to the toilet. If they break the taboo, the couple will be cursed with bad luck for the rest of their marriage.

They’re an amorous bunch in Sweden where each time either the bride or groom leaves the room, the guests are allowed to try and steal a kiss from the newlywed remaining in the room.

Also, if a guest starts banging their glass the other guests join in and the bride and groom must kiss.

A lot goes on during a South African wedding where 12 symbolic items are weaved into the ceremony. Salt, pepper, wheat, wine, bitter herbs, a holy book, broom, spear, spoon, honey, a shield and a pot – each symbolises a challenge which the couple will need to overcome together during their married life.

This one seems a little creepy! IN the west of Ireland, young men disguised in straw costumes and hats visit weddings to dance with the bride, sing and tell jokes. Their presence is said to bring luck and good fortune to the couple and while the tradition faded for a while, it’s enjoying a modern day revival.

To demonstrate their teamwork and strength to master the challenges life will throw at them, newlyweds in Germany must work together to cut through a large wooden log using a two-person saw. This also represents the first obstacle they will overcome as a married couple.

Familiar with any other strange wedding traditions? We’d love to know more.