Revealed: most common surnames in EVERY country

Most travellers love to learn about different cultures; but not all culture need be learned in art galleries, museums and other similar institutions.

In what could be a surprise to many, the origins and usage of surnames can reveal “extraordinary insights into the history and culture of different societies”, says NetCredit, who has just released data and infographics outlining the most common second names in every nation on earth.

According to the US financial services company, “the etymologies of surnames fall into five different categories: occupational, personal description, toponymic (from a place name), patronymic (from an ancestor) and names signifying patronage”. 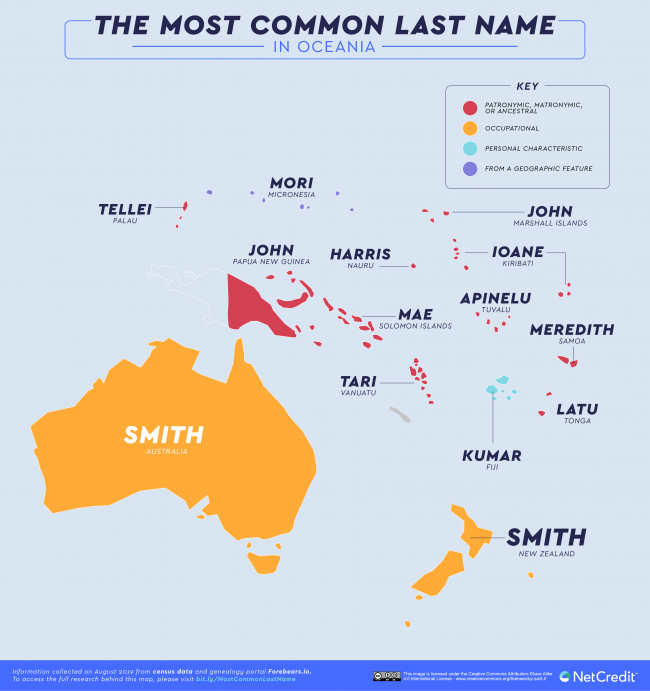 While the most common surname in Australia and New Zealand is Smith, the most popular names across Oceania broadly, reflect the region’s multiculturalism, such as the name Kumar (of Indian origin) in Fiji and Mori (of Japanese origin) in Micronesia.

In Asia, surnames largely derive out of the continent’s dynastic past, with Tan (from ‘Chen’) an important state in China’s Zhou dynasty and the most common last name in Malaysia and Singapore. 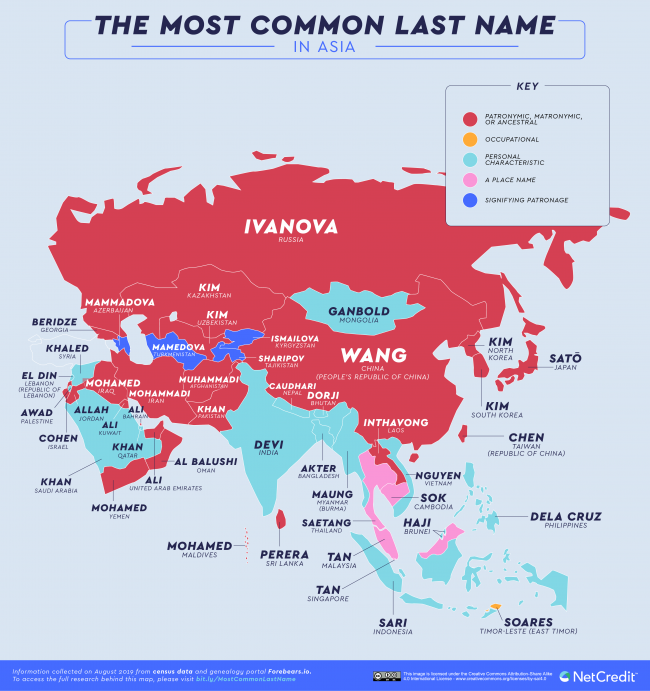 In the US and Canada, the most ubiquitous second name is Smith, while in Mexico, and some Central American countries Hernandez is most popular. 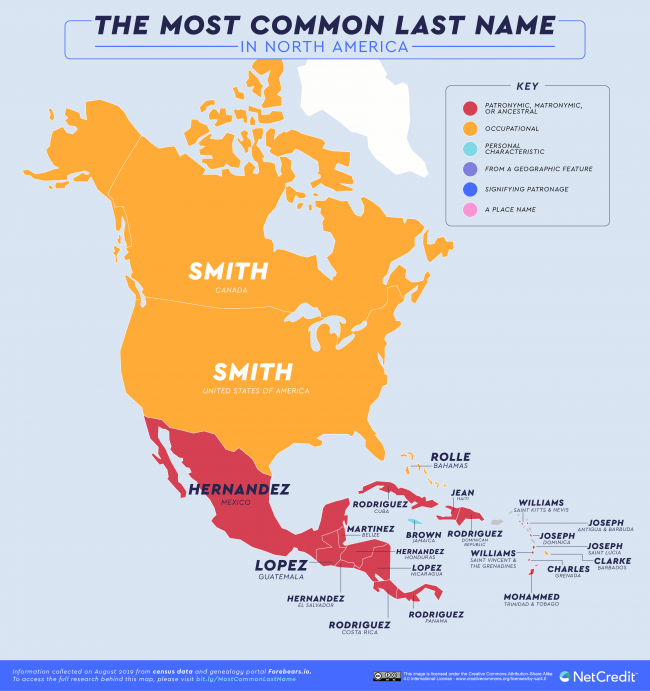 Gonzalez is the most common name in several South America nations including Argentina, reflecting this continent’s Spanish colonial past.

In Europe, names are far more likely to derive from an ancestor’s job, like Muller (‘miller’) in Germany and Switzerland. 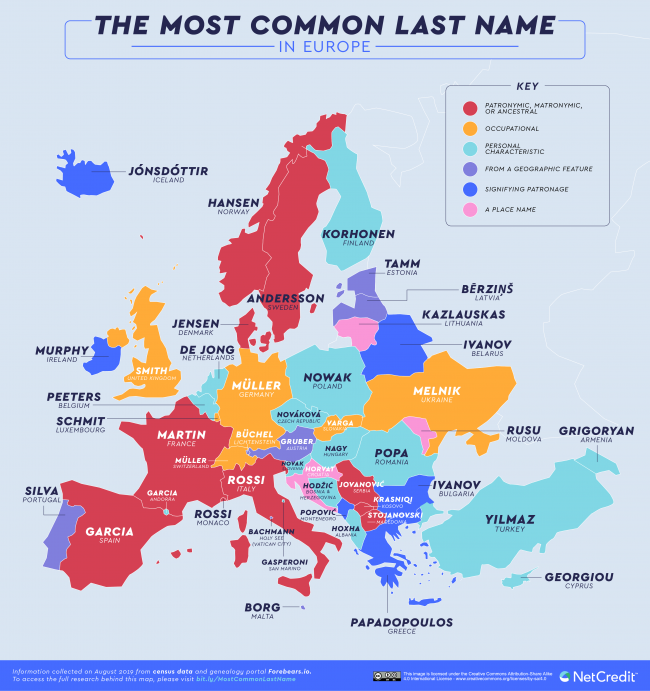 Unsurprisingly, the most popular name in the UK is Smith, while Martin, Garcia and Rossi are the most used names in France, Spain and Italy respectively.

Methodology - To determine the most common last name in every country, NetCredit analysed surname data from genealogy portal Forebears.io, various country censuses and other sources.

Check out the infographics below to see the rest... 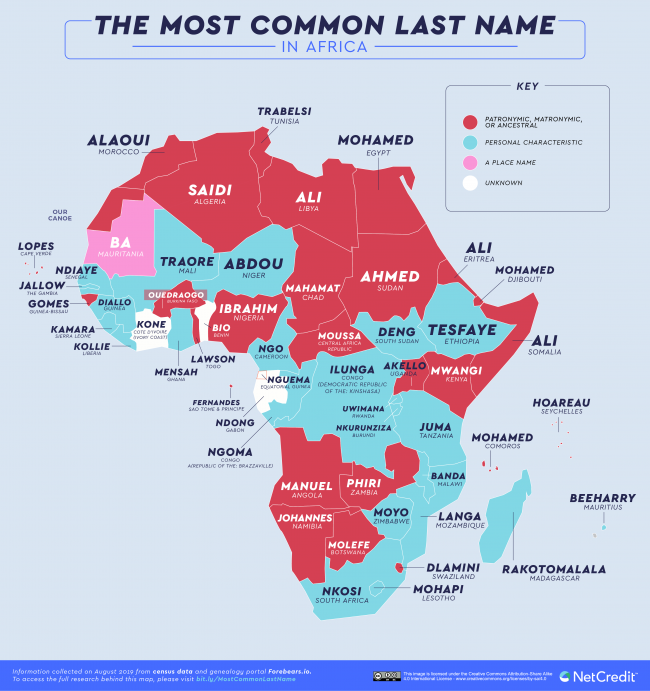 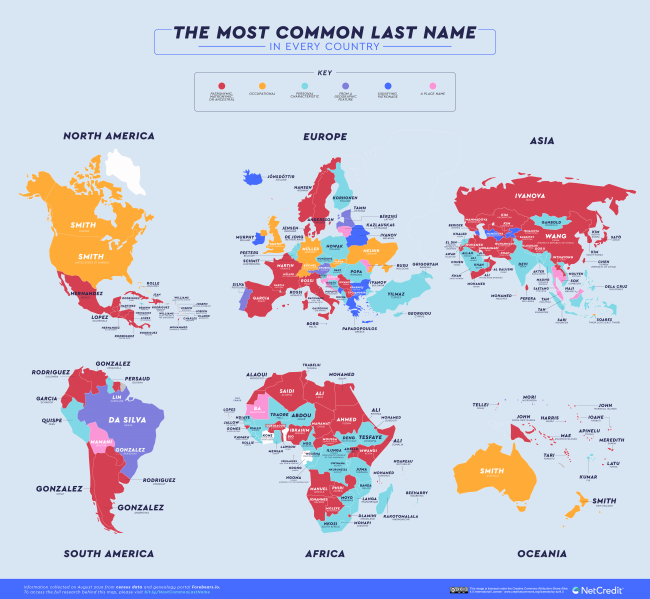