While some have the ‘luxury’ of having a balcony, and others are able to find some solace in wine deliveries, many passengers on the quarantined Diamond Princess cruise ship have quickly come to realise their stay is no picnic. And literally, there’s no fresh air…

One such couple are Australian mother and daughter, Lyn and Clare Hedger.

According to The Courier, the Victorians have been confined to their inner deck cabin since quarantine began nearly a week ago, with their only source of fresh air two short walks on a deck while wearing facemasks and being forced to stay at least two metres away from other guests. 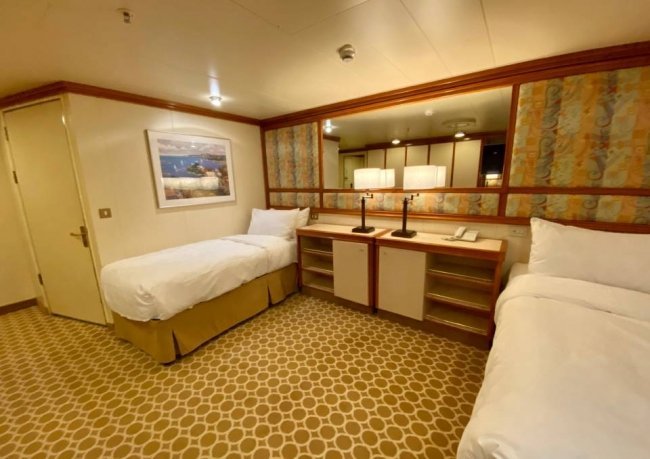 "Fourteen days is up on the 19th, but I guess that will sort of depend on what is happening, because there have been more positive cases since that time, we really don't know, we're just waiting to hear what's what,” Lyn told The Courier from a phone in her windowless cabin.

"Monday night they came round and took our temperature, they started with our floor which is the top floor, and worked their way through the passengers and crew, that took at least 24 hours, so we didn't know then until Wednesday morning that there were 10 positives at that stage."

While those detected with coronavirus have been removed from the ship, which is docked in Yokohama, Japan, new cases are seemingly springing up every day. Of those passengers tested on the vessel, 130 have come back positive for the disease.

"Nobody can go outside their cabins at all and it's a very specific area on the deck we can go to. Yesterday in an hour I did 4km walking up and down, that was wonderful really, beautiful air, you just don't realise how wonderful it is to get out there,” Lyn said.

"They've provided daily puzzles and things like that, but nobody has entered the cabin since last Tuesday, they just drop things off at the door.”

"We haven't had any cleaning or anything like that which we feel it's a bit of an issue. Some people are obviously travelling with children and I just can't imagine what it would be like with children with an inside cabin particularly."