Cruise & Maritime Voyages has revealed the names of its two new ships after a vote from loyalty club members and its social media following.

This follows CMV’s announcement in November 2019 that it had purchased two ships from P&O Australia – Pacific Dawn and Pacific Aria – to join the fleet in 2021.

As a tribute and celebration of the intrepid and courageous journeys of past female explorers and adventurers, CMV decided to recognise their truly remarkable achievements by naming its two new ships after them.

Pacific Dawn will be renamed Amy Johnson, which will take over from Columbus as CMV’s new flagship in 2021. CMV had selected five great names for the vote: Gertrude Bell; Isabella Bird; Amy Johnson; Mary Kingsley; and Lady Hester Stanhope. 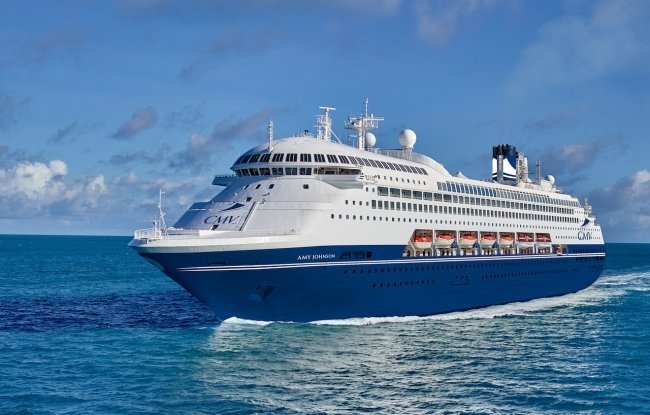 Amy Johnson (1903-1941), a pioneering English pilot and the first woman to fly solo from London to Australia, won 41% of the total vote. In 1931, aged just 27, Johnson set off from Croydon, Surrey to Darwin, Northern Territory.

She set various records including: the first woman to fly from London to Moscow in one day; record flying times from Britain to Japan and Cape Town; and was awarded the Gold Medal of the Royal Aero Club. During World War II, Johnson joined the Air Transport Auxillary (ATA).

At 70,285grt, with 798 passenger cabins and carrying around 1400 guests, Amy Johnson will be deployed to the UK market in late May 2021, bolstering much needed capacity and cruising year-round alongside Columbus ex-London Tilbury.

Pacific Aria, which will sail under the TransOcean Kreuzfahrten brand on the German market, will be renamed Ida Pfeiffer.

Ida Pfeiffer (1797-1858) was an Austrian explorer, travel writer, and ethnographer. Aged 45, Pfeiffer set off on her own to the Holy Land with the aim of completing a pilgrimage. Future trips were funded through her writings.

Ida Pfeiffer, at 55,819grt with 630 passenger cabins and carrying around 1100 guests, will be deployed to the German market under the TransOcean Kreuzfahrten brand with a much-needed increase in capacity, cruising alongside Vasco da Gama during the European summer, and replacing the 580 passenger Astor. Astor is being re-named and will be re-deployed to the French market in May 2021.

Christian Verhounig, CMV’s CEO, commented, “We are delighted with the chosen names and the opportunity to recognise two outstanding female adventurers and pioneers. Most of all, we are pleased to confirm that Amy Johnson will take over from Columbus as the fleet’s new flagship.”

“This explorer was known for her solo journey from London to Australia," CMV Australia Managing Director, Dean Brazier, said.

"The name seems poetic as we have become known for our Grand Voyages between London and Australia, and we do love catering for solo travellers!”

The 2021 European summer programs will go on sale next month.

In related news, CMV today announced it had joined Cruise Lines International Association (CLIA) as a regional member of Europe and Australasia.

This is the first time CMV has been a member of CLIA Australasia, with the cruise line re-joining the European arm after an absence of three years.

“It’s a great example of the expansion of cruise tourism into regional locations around Australasia and we’re delighted CMV has shown such a commitment to our part of the world.”

CMV is one of the few traditional-style cruise lines operating small to mid-sized ships in Australasia offering guests the opportunity to visit some truly distinctive holiday destinations.

Its network of international sales offices has recently increased with the opening, earlier this month, of an office in Marseille to support the re-deployment of Astor in 2021 to the French market.