What do you do when you’re stuck on a quarantined cruise ship for two weeks with a limited supply of wine?

One Australian couple simply called the vino in … by way of a drone delivery organised by their wine club. Or so they said. 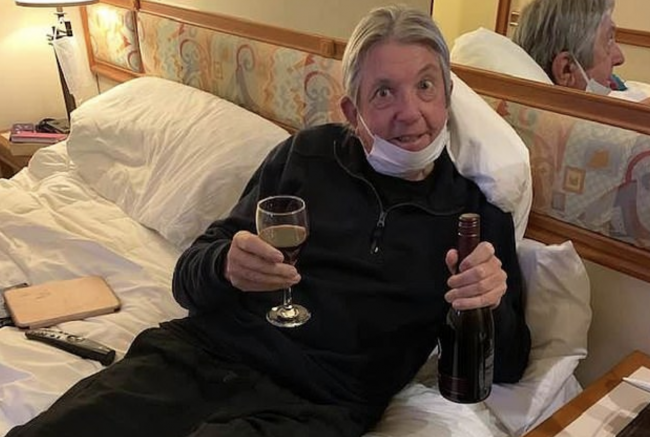 Jan and Dave Binskin, from Palm Beach in Queensland, are two of nearly 4,000 people quarantined to their cabins on Princess Cruises’ Diamond Princess cruise ship in Yokohama, Japan, on account of the coronavirus outbreak.

But their time on board the stricken vessel is going by a little less unpleasantly thanks to a joke they played on social media that went bigger than they imagined.

The couple claimed a delivery of two cases of wine we're delivered by drone from their wine club.

“On a lighter note in the middle of the Kaos yesterday we get a ring from our wine club I asked do they do free freight to Japan … we have arranged for 2 cases to be delivered by Drone,” the couple posted on Facebook.

Confirming their delivery in another post, the pair praised their “incredible” club.

“… Just got the first drop. Thank God for drones, the Japanese Coast Guard did not know what the f*** was going on.”

In a photo, Mr Binskin can be seen enjoying a glass of red in the couple’s own “happy hour” in their cabin.

Turns out the wine came from their obliging steward.

At least their isolation on board was broken by the knowledge that their post was seen across the globe and picked up by many a gullible media outlet (ourselves included).

Fortunately for the Binskins, and many of the other passengers on board, they were finally allowed 12 hours ashore in Yokohama after five days of confinement in their room.

“Good Morning Yokohama-Shi, back again after 12-hour cruise. Still holding it together, might get on deck today,” a later update read.

According to Japan’s Kyodo news agency, Japanese health minister Katsunobu Kato said the government is now considering testing all crew and passengers on board the Diamond Princess.

Of the 336 people tested for the virus so far, 70 cases of the illness have been confirmed.