Just when you thought selfies couldn’t get any more stupid, along comes this woman.

A passenger on board Royal Caribbean’s Allure of the Seas risked life and limb after climbing off her balcony and onto a tiny ledge to take a photo of herself. 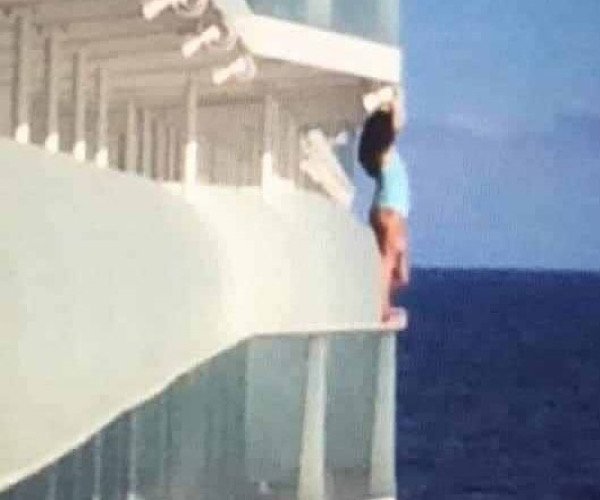 The unidentified woman was seen in the precarious position by fellow passenger Peter Blosic, who said she was wearing just a swimsuit.

According to The Sun, Mr Blosic posted a photo he took of the woman online, in which the female cruiser appeared to be holding a camera above her head.

"Just witnessed this on Allure. What an absolute IDIOT. You cannot fall off of a ship unless you are acting like a moron!" he wrote.

After witnessing the incident, which took place on the starboard (right) side of the ship, Blosic said in his post that he alerted guest services.

"I showed the concierge. The staff captain then wanted to meet with me and get a copy of the photo. We easily determined the cabin number since it’s on the hump," he wrote.

The woman was removed from the ship when it docked in Falmouth, Jamaica.

"Sitting, standing, laying or climbing on, over or across any exterior or interior railings or other protective barriers, or tampering with ship’s equipment, facilities or systems designed for guest safety is not permitted," Royal Caribbean says on its website.

RCI also mentions “law enforcement” and the “removal from a ship at the next port of call".

Just days ago, a 75-year-old cruise ship passenger died after intentionally jumping from her cabin balcony.