A 'Can Tho' attitude

RONAN O’CONNELL visits the floating markets of Can Tho, the largest city in the Mekong Delta. 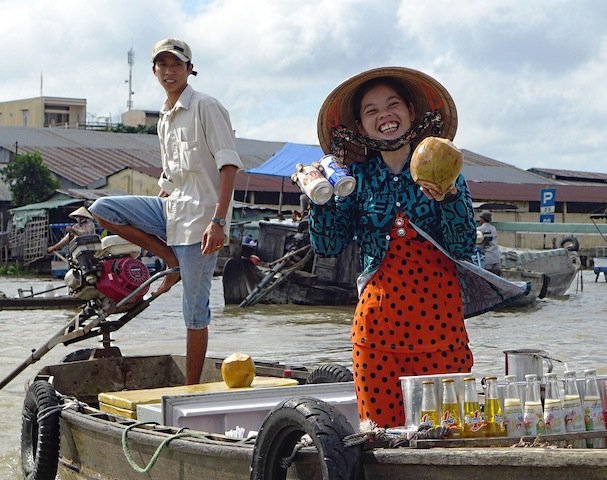 The vendor’s smile is as vibrant as the assortment of fruit she is selling. Leaning over the edge of her timeworn wooden boat, the petite young lady showcases impressive balance as she thrusts towards us a hefty bunch of bananas and a bag of ripe rambutans.

We decline her offer but she has better luck with our guide Minh, who is in the market for some of the plump mangoes piled behind her. A lively exchange ensues as they barter over the value of three pieces of the fruit. Upon its conclusion, both parties appear content and glide in opposition directions along the murky waters of the Can Tho River.

This is a commercial ritual the likes of which are repeated hundreds of times a day amid the floating markets of Can Tho, the largest city in the Mekong Delta. In this corner of Vietnam’s deep south, the grand Mekong River and its myriad tributaries remain an intrinsic component of the local economy.

Just 170 kilometres to the North-East, the effects of globalisation are fervently transforming Ho Chi Minh into a skyscraper-strewn modern metropolis. The same forces have prompted similarly rapid development in Vietnam’s other two main cities, Da Nang on the central coast and the capital Hanoi in the distant north. 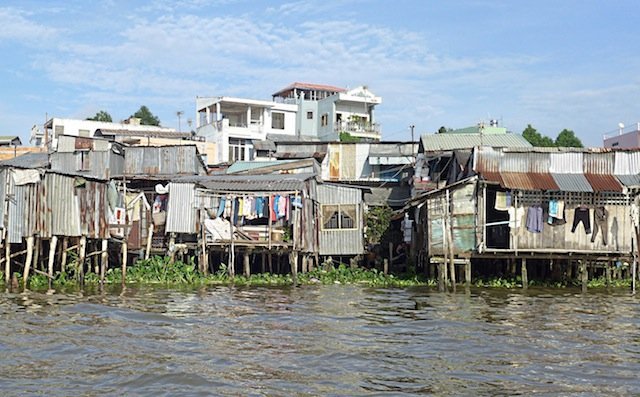 Can Tho is not entirely sheltered from these winds of change. While agriculture has long been the city’s lifeblood, the Vietnamese government is reportedly aiming to shift its economy towards industry and services. But this modernisation matters little to many of the residents of Can Tho for whom life on and around the Mekong is the only reality they’ve ever known.

Minh is among those who have no interest in becoming part of the new Vietnam. She was born just outside Can Tho and many of her dearest childhood memories involve the waters of the Delta. Spending each day navigating its expanses is much more preferable to being perched behind a desk within a cubicle, she reasons.

As Minh weaves our boat between drifting fresh produce dealers, she frequently calls out to familiar faces. Waves and greetings are plentiful in this river-based community. Minh explains that many of the commercial relationships in the local agriculture trade go back for generations.

Families of farmers and retailers foster close ties with one another. The trust and respect built up over decades of mutual benefit are plain to see amid the jovial bargaining on the riverside docks and from vessel to vessel.

Minh acts as our translator as we ask various vendors and consumers about Can Tho and their thoughts on its future. Commonly they would prefer that tourism helps build the local economy, rather than industry. They are proud that foreign travellers are fascinated with their traditional merchant ways.

This acceptance and warmth towards visitors heightens the charm of a tour of Can Tho’s floating markets. There is a sense you are not an intruder into the lives of the locals but rather an appreciated observer and occasional participant.

Even beyond these water-based commercial hubs, generous welcomes are common in the tangle of jungle-lined canals which pierce residential neighbourhoods. Here, life has a gentle rhythm akin to the easy flow of the creeks. The water’s edge is punctuated by activity of all sorts. A group of elderly ladies take no notice of us as they chat and giggle while washing clothes in the shallows.

However, we soon become the centre of attention after being spied by a group of rambunctious boys climbing a tree which hangs low over the water. Their excited squealing earns a rebuke from a nearby fisherman who is rooted in concentration as he tries to mend a torn net. A clique of teenage girls gathered on a creek-side wall are equally inquisitive though more cautious and polite. They try to practise their English on us and, in the moment, are successful before we float from sight. 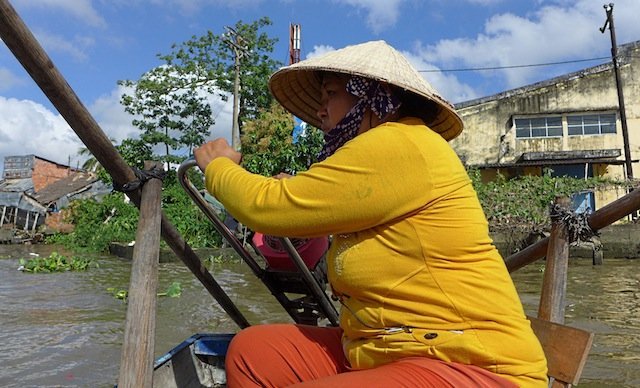 Minh gestures towards a tin building partly obscured by thick vegetation overlooking the water. When she was in school she had worked there briefly, cleaning the shop and occasionally tending to customers. She cranes her neck seemingly looking for a recognisable shape but no one is around. After almost two hours meandering through these tight canals, past quaint hamlets we slip back out on to the Can Tho River near the city centre.

Bidding Minh farewell, we thank her for the insight into the local culture and wish her the best. The jetty at which we depart abuts the attractive riverside promenade of downtown Can Tho. For a fast-growing city with a population in excess of one million people, thisprecinct is surprisingly peaceful and charming. It has the ambience of a small rural town rather than a metropolis similar in size to Adelaide. Hotels, restaurants and bars variously targeted at locals or tourists dot the riverfront street Hai Ba Trung.

Nearby, Can Tho’s old, ramshackle market has been replaced by a covered version, which inside sports lovely exposed wooden beams on its lofty vaulted ceilings. Typical tourist-oriented fare like t-shirts, magnets and the ubiquitous Vietnamese conical hats are on offer alongside more authentic items of seemingly handmade arts and crafts.

Stall operators deliver softly-spoken pitches. There are no hard sells here. The understatedmanner in which they go about their business is reflective of the atmosphere of Can Tho. It may be moving forward, perhaps begrudgingly, at the behest of an ambitious government. But, for now at least, it remains a sleepy place where the Mekong rules and the land provides.

It is still the Can Tho which Minh cherishes.

GETTING THERE: Can Tho is a three-hour bus ride south west of Ho Chi Minh City. Numerous bus operators run regular services between the two cities.

WHEN TO GO: The wet season from June to September is best avoided as the Mekong Delta is buffeted by rain and thunderstorms, which often leads to extensive flooding.

HOW TO TOUR: Tour agencies in Can Tho offer half or full-day tours of the floating markets and canal-side communities.