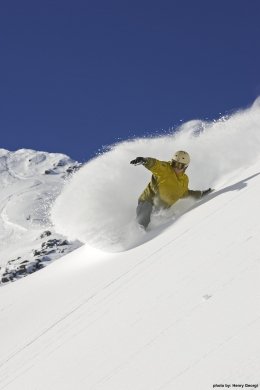 “Okay, now our avalanche beacons have indicated they’re down there, so we dig for the body, just be careful when using your shovel because you could bludgeon them to death.”
This is not what I want to hear right now. It’s just a few minutes from lift-off on my first heli-skiing adventure and we’re already digging each other out of icy tombs. I might’ve just met my snow buddy, but he’s already the guy in charge of saving my life. Although of even more concern, I’m his lifesaver too, and I can’t work a TV remote control, let alone a red light flashing, signal-beeping, bacon-saving transmitter.
While this realisation makes me sweat, despite the sub-zero temperatures, at least I’m in the safest place on Earth for heli-skiing. Canada – and British Columbia (BC) in particular – is the spiritual home of the sport; it was here in 1965 that Austrian ex-pat Hans Gmoser established the first successful operation of its kind.
These days 90 percent of the world’s heli-skiing is done in this state. In fact, if you want to do anything remotely crazy in the snow then Canada is the place for it; there’s a backcountry activity here to satiate every ski nutter. There are over 15 heli-ski operators in BC alone, accessing some of the planet’s best vertical terrain. There’s also a further 20 cat-ski operators (where skiers can access backcountry snow for less money using an all-terrain vehicle). The snow landscape of Canada best lends itself to backcountry adventure. There is no more skiable mountainous terrain on the 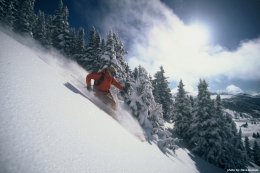 planet and although there are over 20 of the world’s best ski resorts here, it’s the skiable areas that can’t be accessed via chairlift that make the country so appealing to extreme skiers (although be warned, in Canada, ‘extreme’ is a word only tourists dare use – you’d better be darn sure what you did was hardcore before you start telling any local about it).
I’m right now on the outskirts of Revelstoke – it’s the kind of town where locals walk pet pigs down the street (seriously, I saw it with my own eyes) and barmen fill you full of free shots because they like your accent. But it’s also home to some of the world’s busiest heli-ski operators and its ski mountain has had over a billion dollars of investment funds pumped into the mountain resort since 2008. That’s Canada for you, it somehow manages to hide its sophistication behind a flannalette-shirt exterior.
A chopper materialises and we take to the air. In truth, heli-skiing isn’t anywhere near as dangerous as you’re tempted to brag about once you’ve done it. Because you access far better snow than you’ll find in a resort, and there’s no-one else around you, your chances of accidents are minimised. You could, of course, fall hundreds of metres into a crevasse but chances are your guide will find it long before you do.
We land and I take off on powder snow runs better than any snow I’ve seen in North America; the snow goes past my thighs and it’s untracked, meaning if I fall it’s only because I screwed up. My legs ache half-way to the bottom, but adrenalin and sheer elation keep me boarding. Each run (we do seven, the first four are covered on your day rate, additional runs cost extra) is costing roughly about $200 a pop, but it’s worth every single Canadian cent.
The writer travelled courtesy of the Canadian Tourism Commission.