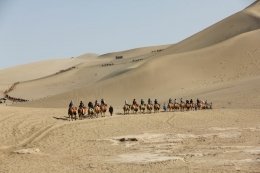 Riding bactrian camels on the Singing Dunes of Dunhuang.

"I'm here for the romantic thing, you know?" says Geoff, a social worker from Perth.

We are standing at the Chinese border with Kyrgyzstan on the Torugart Pass waiting for immigration clearance. It is cold and it will be sometime before we are processed.

I knew immediately what Geoff meant: the Silk Road tops the charts of evocative destinations. The mind reels with visions of camel caravans crossing forbidding deserts, defensive walls and works of art carved out of rock.

At this point we have crossed the whole of China from east to west roughly in the footsteps of Xuanzang, the seventh century monk who in order to acquire genuine Buddhist texts from their source in India, set off on his own from Xi’an all the way to Nalanda University near Varanasi in India. It took Xuanzang years to complete his epic journey but his observations helped consolidate what we today call the Silk Road.

To say China is vast is an understatement. What unfolds before our eyes is an astonishing landscape peopled by magicians, monks, merchants, musicians and slaves, migrating alongside heavenly mares and camel-loads of silk, glass, spices and untold treasures.

On the way we find traces of Wu-di, the Emperor who set siege to the Ferghana Valley (now in Uzbekistan) until he got the heavenly horses he desired; of Genghis Khan and his grandson Kublai Khan, who despite popular lore were a unifying and modernising influence with their consolidation of paper currency, reliable postal service and a sequence of watch towers which assured caravans’safety. At the time of his return to Venice, many of Marco Polo’s tales were met with skepticism but what the merchants of Venice couldn’t swallow at all was that the court of Kublai Khandealt in paper currency. Venice bankers had a long way to go yet.

Travelling along the Silk Road within China is like travelling through different continents. The Gansu province, for example, is home to two autonomous prefectures: Linxia for the Muslim Hui and Gannan for the Buddhist Tibetans. We climb from a forest of newly built mosques alongside the main highway on the valley to emerge in a stark and brilliantly sunlit plateau dotted with yaks and sheep. The Labrang Monastery (Xiahe) could be in Tibet proper.

The main drag of this small town is a place where I could spend days, just people watching. Amdo men and women stroll around in their traditional chubas (robes), one sleeve always hanging to one side, wearing Akubra hats (yes, I have checked their lining).

In the huge monastery pilgrims prostrate around sacred sites, monks gather in courtyards to debate and a young Buddhist nun – so overwhelmed at finally arriving after weeks on the road- prays while tears stream down her pretty, soot-stained face, her magenta robes billowing in the wind.

“I think you are Chinese really,” my guide Bin says. “Come, let’s go to a noodle shop.” I’d only said I was feeling peckish. Bin is a powerhouse of information. A true generation Y, he has two smart phones (latest version) and is constantly checking facts using the Chinese equivalent of 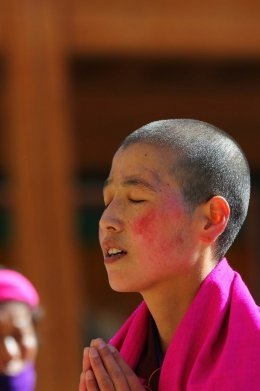 A Buddhist nun gives thanks. Google. A true Millennial, he is liberal, has a tertiary degree, speaks fluent, colloquial English and dresses like a cool dude even when he has never been out of China.

The noodle shop is a place I wouldn’t have walked in if I hadn’t been with Bin - and I am an adventurous soul. The steaming bowls we get are delicious. Watching a stretched piece of dough beaten repeatedly till perfect noodles form as if by magic is mesmerizing (no cutting involved). And so the tone is set for the entire trip. We eat regional, whether it is flat breads from a street tandoor oven (a typical sight in Xingjian), savour ‘mare’s nipples’ (grapes) or sit-down to feasts fit for kings.

We skirt the Gobi desert in an overnight train and enter the magic world of fortresses emerging from the sand (Jaiyu Fort was said to be the “most impregnable pass under Heaven”).We ride Bactrian camels on the 'Singing Dunes of Dunhuang’, wondering how the city is not devoured by them (the answer is the city is built on the windward side). We amble through the grape vines of Turpan, take donkey carts to explore the mysterious ruins of Gaochang and marvel at the Mogao caves - silent, dark and full of delicate paintings.

At the Heavenly Lake near Urumqi I spot a wedding couple disappearing down the hills; bride enveloped in a cloud of white tulle, groom with violin in hand.

Kashgar’s animal market has hundreds of camels, goats, fat-tail sheep and horses filling a huge area in the city outskirts. Horses are taken for a test-ride at full pelt through the lanes, sheep are butchered on site and kebabs are barbecued while farmers from as far as Kyrgyzstan and Kazakhstan conduct silent bids under wraps.

Once we clear the Kyrgyz border we enter what can be best described as the most unexpected and beautiful landscape in Central Asia. A detour to Tash Rabat - a medieval stone caravanserai - is a treat. Kyrgyzstan is sparsely populated, has millions of horses and keeps traditional practices such as bride kidnapping, albeit in a stylized manner. It is here that I see more evidence of the Mongols than I did in China, including stalls selling fermented mare’s milk and locals practicing the surviving art of felt making to build yurts.

Flying into Uzbekistan, we plunge into a world of whirling dervishes, sages, mystics and tales of minarets used for throwing people to their deaths. It was a blood-thirsty place with poisonings, decapitations and men sent to fight leopards for their lives.

Samarkand, Tashkent, Bukhara and Khiva were at the crossroads of trade and slavery. Now souvenir shops occupy many of the spectacular former madrassahs’ but there are still plenty of gems surviving like Khiva’s old mosque with its forest of ancient pillars and cool interior. Khiva’s incredible undulating fortified walls are a marvel. These towns started as desert oases, places were caravans stopped to rest, trade and re-supply.

Dreamers and romantics can see beyond souvenir shops, parking lots and development. I meet them along the road, searching, wide-eyed and bedazzled as if we have all slipped through the pages of the One Thousand and One Nights…

The Silk Road to Samarkand via Kashgar starts in Beijing and ends in Samarkand.

Many airlines offer competitive fares to Beijing. Returning from Samarkand is only possible with Uzbek Air to nearby Asian hubs such as Bangkok or Kuala Lumpur. uzairways.com

Trips of this scope are virtually impossible to organize on your own (the language barrier is a problem) and are better left to the experts to secure private vehicles, overnight trains, flights and a knowledgeable guide.

World Expeditions has several trips on the Silk Road and Central Asia classified as Adventure Touring and one trek in the Pamir Mountains. worldexpeditions.com