Close encounters of the bear kind

As wildlife encounters go, standing within 10 metres of a group of big brown bears and their juveniles as they feed on salmon in a crystal clear river has got to be right up there.

We are in Kamchatka, a fish-shaped peninsula hanging off the eastern side of Russia. It might as well be an island since it is only connected to the mainland by a narrow strip of land that is impassable. In fact there are few roads anywhere in Kamchatka, due to the volcanic terrain. The main road, from the capital Petropavlovsk north to Esso, is more or less the extent of the ‘road network’. After that it’s all by helicopter.

So, back to the bears: Ursusarctosberingianus – better known as the Kamchatka brown bear – is not quite as big as his grizzly cousin, but can still grow to three metres tall when standing on his hind legs and some have recorded weights up to 650 kilograms. 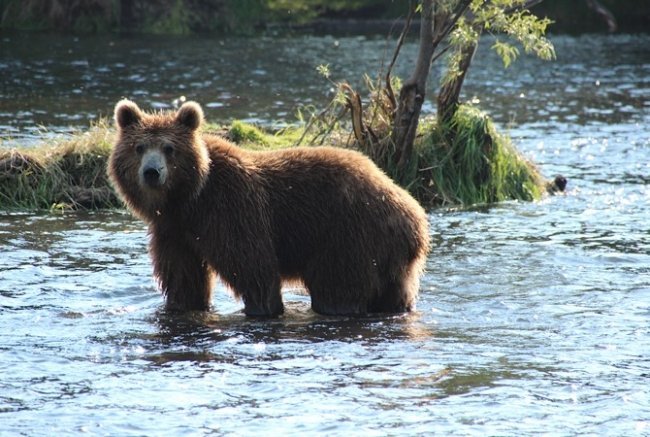 They fish for salmon in the rivers, streams and lakes of the peninsula, and we head north by helicopter to the impossibly-named Lake Dvukyurtochnoye – dubbed ‘Lake D’ by our group – to seek them out.

We spend two nights in rustic but comfortable wooden cabins in the pristine and untouched wilderness of central Kamchatka. It is from here that we trek on foot to the bears – a moderate but steady-paced walk of about 40 minutes through sometimes muddy tracks to the river.

For safety’s sake we are accompanied by a gun-master at the front and the back of the group, though the bears are not aggressive due to being extremely well-fed: the rivers and streams are literally heaving with salmon.

We turn a corner and there, through the leaves, a small group of bears is clearly visible – two adults, a juvenile and two young cubs. The cubs are frolicking in the water, playing on a fallen log and batting the water with their paws.

Beside them the adults meander through the water, occasionally rising up on their hind legs to sniff the wind. They’re no more than 10 metres away and they pay no attention to us at all.

After a few awestruck moments, I find myself growing bold, snapping pictures of an adult dining on freshly-caught fish, the salmon still wriggling in its great paws as it sinks its jaws into the pink flesh.

It is fascinating watching them – especially the juveniles and very young cubs. They’re playful, spirited and utterly unperturbed by our presence nearby. Most of us are observing them from a wooden viewing platform, but I am at ground level with the gun-masters. It is an awesome experience, indescribable: nature at its best.

Altogether we make four trips to see the bears, each about an hour long – early morning and early evening, when they’re most active.

Long after our group returns to Petropavlovsk, the chatter among us is all about the bears – the rightful residents of this magnificent landscape, unspoiled by industry and untouched by human hands.