Journeying into the unknown in Ecuador: famil review

TANIA NORMAN from Oliver Travel in Adelaide gets out of her comfort zone on a famil to Ecuador with Travellers Choice. Thank goodness she packed the waterproof underwear!

When I first heard in late 2017 that I, as one of the Travellers Choice Top 10 Gold Choice Award winners, was headed for exotic Ecuador, naturally my first thought was the Galapagos!

Much to my surprise the legendary islands turned out not to be on our Adventure World itinerary, but what did feature was the Ecuadorian Amazon. 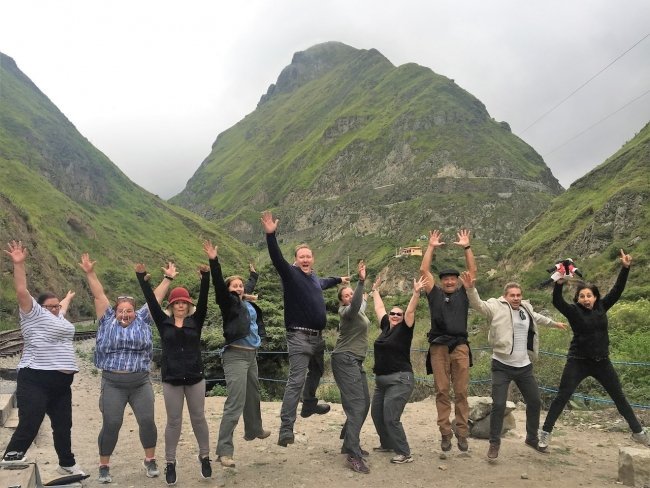 Four months later I found myself standing at the boarding gate feeling a little apprehensive – the truth is Ecuador is a destination that would normally be out of my comfort zone. And what, I wondered, was with the request to bring along waterproof underwear!

Four flights, two overnight stops and a boat ride later, our group arrived at our home in the jungle – the Manatee Amazon Explorer.

During a three-night voyage we had had the opportunity to hike in the Amazon, come very close to some local wildlife (including sloths and the notoriously shy pink Amazon dolphin) and spend an amazing afternoon watching and listening to toucans and macaws in their natural habitat.

At the end of the journey we returned to Ecuador’s capital, Quito, where we stayed at the Plaza Grande Hotel right on the old town square opposite the cathedral. After a private invitation I was lucky enough to climb inside the walls of the Cathedral Metropolitana de Quito (which opened in 1567) up to the rooftop and enjoy great views over the city.

Quito – whose historic centre is a UNESCO World Cultural Heritage Site – is starting to become an artisan city showcasing local produce and what the region offers. It also served as the starting point for the next part of our adventure – the Tren Crucero (also known as the 'Train of Wonders'). This luxury journey from the Andes to the Pacific Coast onboard an antique steam locomotive is a highlight in Ecuador and a must for all travellers visiting this country’s beautiful interior. The five-day/four-night experience gave us the opportunity to see remarkable scenery such as the Avenue of the Volcanoes, Cloud Forrest and the Devil’s Nose Pass (one of the steepest stretches of railway in the world).

We also had the opportunity to stop and meet the locals and experience their way of life – from the chagra (Ecuadorian cowboys) to the last ice man in the world, who hauls blocks of ice from Mount Chimborazo to sell to local traders.

At the end of every day we stayed in local haciendas – my favourite was Hacienda la Denesa, where we were made to feel so at home. There were comfy couches in the outdoor lounge, options to fat tyre-bike the area, ride horses, fish and of course take chocolate classes – all local to the area.

Overall the northern Andes charm and culture – including the music, salsa dancing, the diverse and ancient cuisine, wine and scenery – makes Ecuador’s interior one of the world’s best kept secrets.

And if I was to offer one piece of advice to colleagues it would be this: Ecuador is simply too far to travel to only visit the Galapagos, so be sure to add the interior to any visit. Just contact a company like Adventure World, which will walk you through everything you need to know.