For love of the game

As the World Cup approaches, JON UNDERWOOD goes behind the scenes at two of the most famous football clubs in the world.

Legendary Liverpool manager Bill Shankly once said football wasn’t a matter of life and death – it was much, much more important than that.

Nowhere is that more true than in Liverpool and Manchester, two cities where football isn’t just a sport – it’s a religion. And when fans of Manchester United come to worship, they do it at Old Trafford, nicknamed ‘The Theatre of Dreams’.

THE THEATRE OF DREAMS Even on a non-match day, it’s impossible not to get excited when you catch your first glimpse of the stadium. It’s easy to imagine thousands of fans streaming off the tram from the city centre and chatting excitedly about the game ahead as they walk to the ground.

Statues of famous United legends are dotted around the outside. Former manager Sir Matt Busby has pride of place at the front entrance, with ex-star players George Best, Dennis Law and Sir Bobby Charlton not far away. But it’s the inside I’ve come to explore at a ground I’ve only ever seen on TV. The stadium tour takes you into the inner sanctum and some 300,000 people a year come from all over the world to get a glimpse behind the scenes.

"For a fan, this is probably the closest you’ll ever come to the team,” said Museum Supervisor, Tom Whiteley. “You literally follow in the footsteps of legends. In terms of tourist attractions in the north west, there is no-one bigger than Manchester United.”

The stadium first opened in 1910, ironically with a game against arch-rivals Liverpool, which United lost 4-3. But from that ignominious beginning, Old Trafford grew to become a 75,731-seat colossus, the second largest stadium in the UK outside of Wembley. The tour takes you into the players’ lounge, the rather underwhelming home dressing room and the area set aside for press conferences before a pre-recorded message blares out as you walk down the players’ tunnel and into the arena.

Banks of heat lamps are warming the playing surface, which is smooth as a billiard table, while a team of groundsmen stand by, presumably watching the grass grow. The place is empty, but it still has an undeniable aura. The tour includes the famous Stretford End where the home fans cheer on their team and the spot reserved for current manager, David Moyes, in the dugout. There’s also a stop at the monument erected in memory of those United players who died in the Munich disaster of 1958 when eight team members from the famous ‘Busby Babes’ lost their lives.

The tour ends at the impressive three-storey museum, where tributes to United legends are again in abundance. Memorabilia and exhibitions on David Beckham and Charlton mix with interactive displays and information, with special emphasis on the treble year of 1999 when United won the Champions League, FA Cup and the Premier League, the first team in English football to achieve the feat. 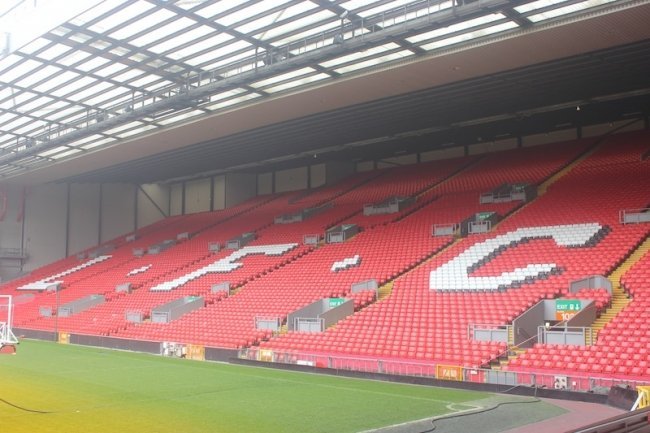 Anfield, the home of Liverpool Football Club, is smaller than Old Trafford, holding 45,522 fans, and is bordered by areas of wasteland and derelict buildings. But this is because there are ambitious plans to expand the capacity to 78,000 in the next couple of years with stand extensions and massive redevelopment around the stadium.

The award-winning stadium tour starts in the ‘Legends Lounge’ which is decorated with pictures from Liverpool’s glory years. Famous faces of players like Kevin Keegan, Kenny Dalglish and Steven Gerrard stare down from the walls and the enthusiastic guides speak in revered tones about the footballers and back room staff who have graced the club.

Liverpool folklore speaks of ‘The Boot Room’, an inner sanctum where the manager and his staff would gather to talk tactics over a cup of tea... or maybe something a little stronger. Sadly, the room itself has made way for a press area and somewhat coincidentally, Liverpool hasn’t won the championship since its removal.

A tour of the dressing room precedes the walk out onto the side of the pitch but it is here we pause for another piece of football legend: the ‘This is Anfield’ sign at the top of the players’ tunnel. Bill Shankly had it put there to intimidate opponents and inspire his players and everyone stops and touches it for good luck or has a photo taken.

A few short steps and we are out onto the edge of the playing field and heading to the dugout to sit in the seats occupied by the manager and the substitutes. Current Liverpool manager Brendan Rodgers sits in the same spot for every home game and visitors make a beeline for his chair.

But for me, the highlight of the tour comes last with the chance to sit in arguably the most famous spectator stand in the world: The Kop. The place is deserted but suddenly the Liverpool anthem, You’ll Never Walk Alone, rings out and the few hairs I have left on the back of my neck stand to attention on command. Football can do that to you sometimes.

Back inside, there’s time to visit the recently renovated and reopened museum – The Liverpool FC Story – which features film clips, interactive displays and memorabilia from the club’s history. There are poignant displays on the Hillsborough disaster of 1989, which claimed the lives of 96 Liverpool fans, and the Heysel Stadium disaster of 1985 which saw English clubs banned from European competition. But triumph often comes out of tragedy and the tour ends with a display of the European Cup, which Liverpool has won five times.