Ring the bell for Belfast

Formerly a tourist no-go zone, Belfast is emerging from decades of conflict to become a bucket list destination, as JON UNDERWOOD discovers.

It took me all of seven minutes to fall in love with Belfast.

That invaluable font of all local knowledge (aka the cab driver collecting me from the airport) tipped me onto the best pub in town, conveniently located just around the corner from the excellent Clayton Hotel. 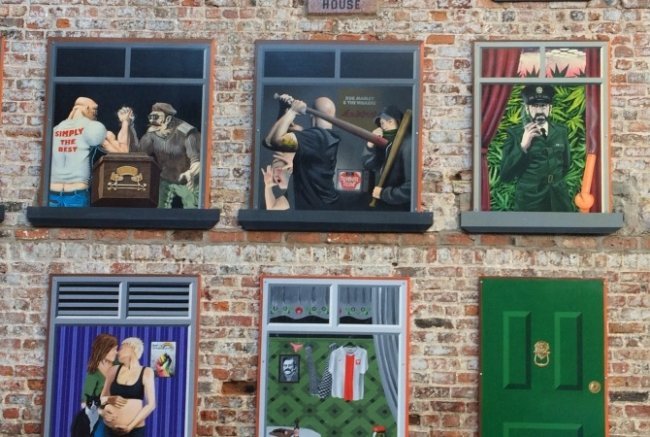 And so it was that barely moments after dropping my luggage I was warmly immersed in that unique Irish phenomenon known as the ‘craic’, an almost indefinable mixture of humour, honesty and hospitality that seems to course through Irish veins from birth.

As I sat there in Fibber McGee’s, listening to a local band belting our traditional Irish music while the packed house clapped and tapped their feet, I pondered the transformation taking place in modern Belfast. Back in the day, ‘the troubles’ made this city a tourist no-go zone. With the peace process seemingly ending decades of conflict on the streets, Belfast is fast emerging as a tourist must-go zone.

The excellent Titanic Belfast exhibition has played a massive part in the city’s rejuvenation, pumping millions into the local economy and almost singlehandedly kick-starting the tourism transformation. The building itself is almost as impressive as the liner that it serves to honour and I was engrossed from beginning to end wandering around the multi-floor exhibition.

The story of Belfast and its famous Harland and Wolff shipyards set the scene for the building of Titanic and her subsequent doomed voyage, with harrowing accounts from survivors and plenty of archival evidence. A section of the exhibition is dedicated to Robert Ballard’s discovery of the wreckage and the essential information that historians learned from that momentous find. No trip to Belfast would be complete without visiting this compelling tribute to a tragic story that still resonates more than a century after it happened.

For a wider ranging (and certainly more colourful) look at Belfast’s past, you’ll need to contact Billy Scott, who runs tours around the city in a London black cab. Forget your hop-on, hop-off tourist bus tours; this is as up close and personal as you can get. Billy is part historian, part poet, part nightclub comedian and his company is every bit as enjoyable as his tour. He’ll tell you there are otters living in the River Lagan and that Belfast invented chocolate and air-conditioning...all of which you’ll believe.

He’ll also take you down the Falls Road and show you the street murals portraying ‘the troubles’, past Sinn Fein’s head office and onto the massive ‘Peace Wall’ which still keeps Catholic and Protestant factions from coming to blows. Both Bill Clinton and the Dalai Lama have signed the wall. Billy favours neither side in his commentary but having lived through it, you know that his insight is firsthand.
But his tour also looks at the artistic, historical and modern face of Belfast, including new retail complexes, the City Hall and the fact the city is hoping to increase its allocation of hotel beds by 30 per cent by 2020. We also managed a sneaky pit stop in The Duke of York, which I’m guessing is his favourite watering hole.

Not that you can’t strike out alone and wander the streets – Belfast was recently voted the second safest city for tourists behind Tokyo (although that was one of Billy’s “facts”.) The city is conveniently split into quarters and the Cathedral Quarter houses plenty of free attractions, including the Oh Yeah Music Centre, which offers recording space for up and coming bands, The MAC (Metropolitan Arts Centre), St Anne’s Cathedral and The Black Box arts and entertainment venue.

With 2016 also being Northern Ireland Year of Food and Drink, you can also find some top restaurants, some with Michelin stars, such as Deanes Eipic and Ox. But there are plenty of reasonably priced eateries to just sit, eat and relax in a city that is now definitely on the menu. Belfast can’t and won’t forget its past. But more importantly, it can now look ahead to bright future.