Here, we take a look at the latest multi-million dollar attraction that has just opened at Walt Disney World Resort in Florida.

Toy Story Land at Walt Disney World Resort transports guests of all ages back into the whimsical world of a child’s imagination. It has been inspired by the hugely popular Toy Story films from Pixar Animation Studios.

Sited at Disney’s Hollywood Studios, it sees Woody, Jessie, Buzz Lightyear, Slinky Dog, Green Army Men and other characters from the films come to life in the outdoor setting of Andy’s backyard. 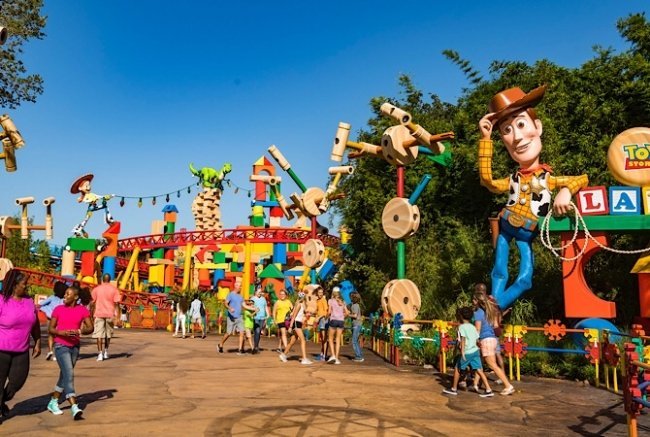 Toy Story Land includes two new attractions and a new entrance. Guests can hop on Slinky Dog for a family-friendly roller coaster ride or take a spin with the little green aliens from Pizza Planet.

A world of toys surrounds visitors, including giant building blocks, Tinkertoys, yo-yos, board game pieces, dominoes, Scrabble tiles and even a giant roller coaster set. There are also Crayola crayons, a Rubik’s Cube and other nostalgic toys and games to play on. A balsa wood glider, a barrel of monkeys, giant playing cards and jacks add to the visual tapestry of the new land.

Standing more than six metres tall, Sheriff Woody welcomes all to Toy Story Land by jauntily leaning on a tall assemblage of colorful wooden blocks, tipping his wide-brimmed hat to guests while holding on to his trusty lasso. 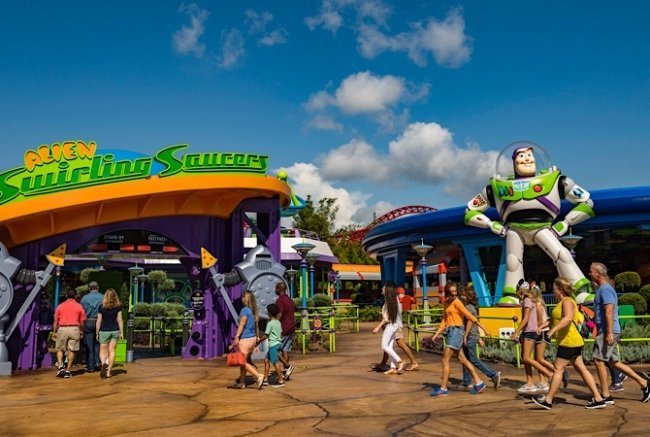 “This new land will place guests inside the wondrous world of Woody, Buzz and their pals – and invite everyone to experience the joy of being a toy.”

Toy Story Land is part of a multi-year reimagining of Disney’s Hollywood Studios and the largest expansion in the theme park’s history.

Next year will see the premiere of Star Wars: Galaxy’s Edge. This new five-hectare land will allow guests to visit Black Spire Outpost, a remote trading port on the edge of wild space, where Star Wars characters and their stories come to life, and where guests will find themselves in the middle of the action. SLINKY DOG DASH is inspired by the classic 1940s American toy. In each 18-passenger coaster train, riders zip around and above Toy Story Land, catching great vistas of all the new land has to offer. In a first for a Disney coaster, Slinky Dog Dash features a second launch at its midpoint as riders experience cool sound effects and spinning lights, darting through a series of rings on their way to the attraction’s finale featuring Wheezy, the squeaky penguin from the Toy Story films.

ALIEN SWIRLING SAUCERS sees the little green aliens from Toy Story swirl about in toy rocket ships with guests in tow, while ‘The Claw’ hangs overhead. Two sets of 11 saucer/rocket-ship pairings spin guests through a multi-coloured galaxy to a raucous, energetic musical beat.