Imagine your excitement when you receive the news that in a few days you'll go on a voyage aboard a super luxury gulet from Turkey to Croatia. During the journey you'll pass by the coastline of five countries, adding Greece, Albania and Montenegro to the already mentioned ones; you will sail around one of the most beautiful islands in Greece, cross three different seas, witness gorgeous sunrises and sunsets, and cross the Corinth Canal - the narrowest manmade navigation water passage in the world. 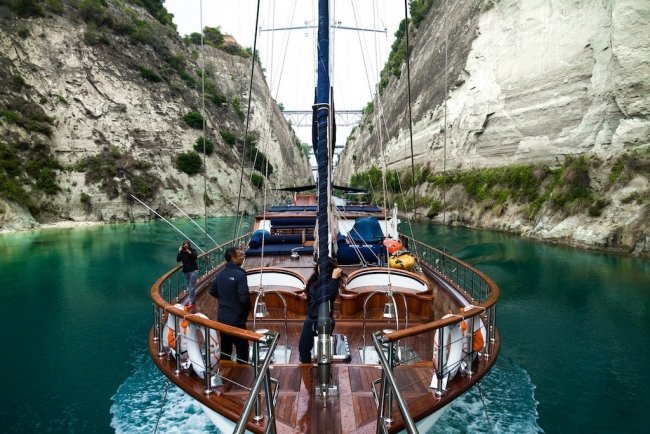 The moment I found out about this, a huge smile came across my face, and I immediately started to imagine how many beautiful photographs I could take to share this journey.

The luxury yacht that I would call my temporary home was a 30-meter traditional Turkish charter gulet - one of the most popular of her kind in Europe.

Normally, this vessel spends winter in her home base port of Marmaris, in Turkey. But in order to get to the Adriatic Sea for summer, the yacht needed to travel some 850 miles. It would have been even longer, by around 430 miles, if there hadn’t been the short cut via the Corinth Canal in Greece. 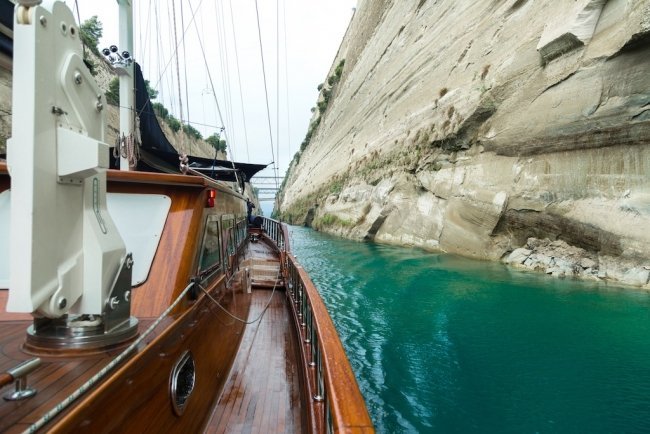 This unique passage connects the Gulf of Corinth with the Saronic one, allowing vessels to travel between the Aegean Sea and Ionian Sea without going around the Peloponnese.

The watercourse separates the mainland of Greece from the peninsula, which essentially turns the Peloponnese into an island. The canal is approximately four miles long, and only about 70 feet wide; in parts, its width reaches 82 feet. Therefore, only vessels not wider than about 57 feet are able to go through the Corinth. The rest, like modern ocean freighters, need to do a long journey around the peninsula.

The canal isn’t only a navigation conduit; it also serves as a popular tourist attraction, where people from around the world come to enjoy its beauty and to watch vessels go by. Resembling a straight line from above, the canal is also a popular location for bungee jumping. During summer, those who enjoy extreme sports come to experience one of the most exciting jumps anywhere. 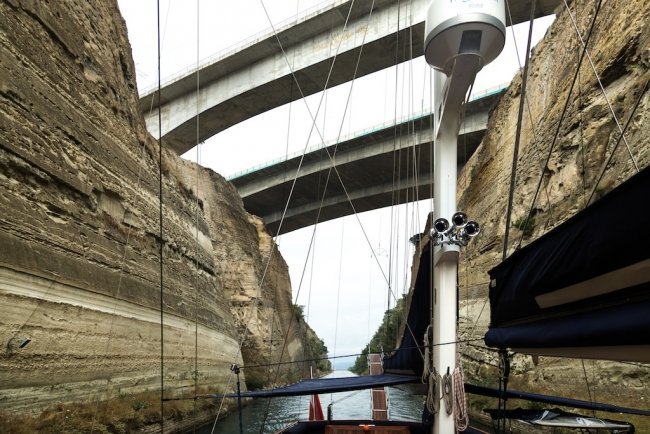 The sea passage has an interesting history. The idea to dig a channel here was born in the 7C BC by the tyrant Periander, who saw the effectiveness of the canal. However, he abandoned the idea after an oracle told him that building a canal could cause a massive inundation of the land (because the two seas which surrounded the isthmus had different levels of water). Plus, it could seriously enrage the greek Gods.

After him, there were others who dreamt about the canal. But it is only at the end of the nineteenth century when the dream became a reality, with the canal opening to vessels in 1893 after eleven years of construction. Back in World War II, the conduit was almost destroyed by German forces, when after multiple explosions, it was covered in soil and military detritus. Thereafter, it was closed for a few years. WE SAILED off from Marmaris early Saturday morning. The passage through the canal was expected to take place the next evening, which meant I had enough time to prepare myself (and camera) and choose the best spots. This could have been a once in a lifetime opportunity for me, and if something had gone wrong I wouldn’t have been able just to ask the captain to do the passage again!

At 6:30pm, I heard the yacht stop its engines, and when I went outside to find out what had happened, I realised we were here. So I positioned myself at the sun deck, the highest point of the yacht, where I knew I could take a lot of photos and videos at the same time.

As we entered the canal, I noticed people standing on both banks of the passage. Some of them were random viewers, while others were stuck in their cars waiting for us to pass so they could continue driving across the passage; the canal is crossed by several roads and a motor way, as well by a railway line. 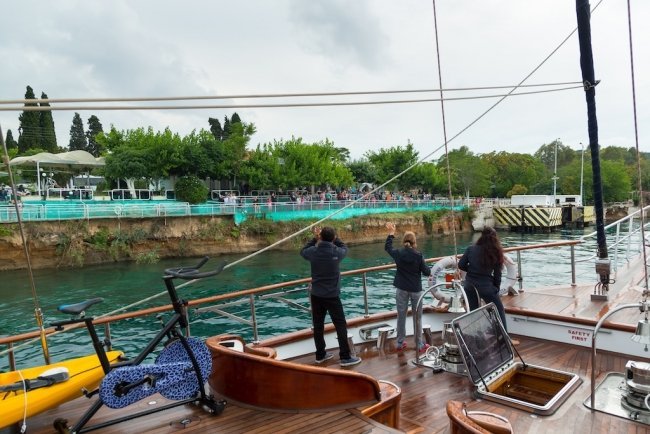 A little further into the canal, I noticed a special observation deck full of people who came specially to watch the passage of the ships. Among the onlookers were a group of school kids who couldn’t contain their excitement. This definitely made the passage very emotional, and I still get goose-bumps every time I remember this special moment.

As we went deeper into the channel, the passage became more narrow, and the 'walls' higher. The maximum height of the cliffs is 63 meters, but the point where the passage is crossed by the motorway and railroad is lower; from below, it even looked as if our masts could touch the passageways. Of course this isn’t possible.

Thanks to the cloudy skies, the water in the channel took the color of vibrant aquamarine, and the cliffs turned a rich terracotta color, which made us feel as though we were caught inside a beautiful oil painting. 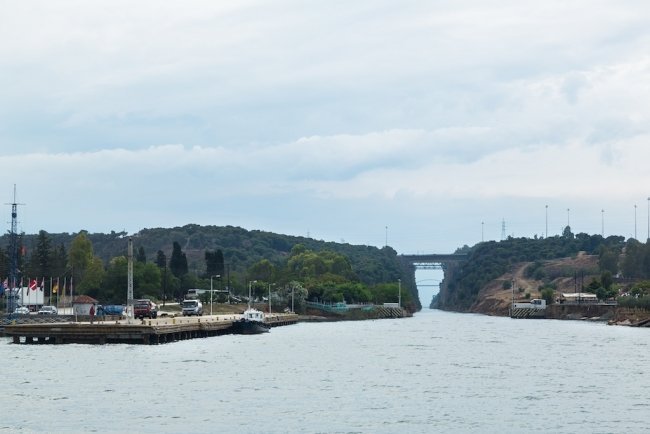 It only took us around 25 minutes to cover the whole canal, but this was half an hour I will remember all my life. Don’t hesitate if you ever get a chance to cross the Corinth Canal, especially in a chartered yacht. This experience will add tons of positive emotions to any holiday.