The taste of aloha

Scott Podmore puts his belt buckle to the test on a gastronomical tour of Hawaii, fast becoming a food lover’s paradise. 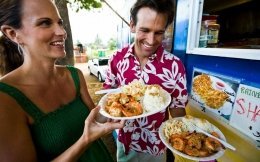 A great way to whet the appetite is to tackle the food truck phenomenon known as Eat The Street on the last Friday each month.

The views were alluring, my resistance weak. How dare they place another Hula Pie in front of me with its hypnotic blend of choc fudge, nuts and ice-cream tantalisingly stacked on a biscuit base?

Those Hawaiians had got me again. This time during a distant ocean stare as a whale was breaching in slow-motion yonder. As I quickly looked away to the left, a smiling hula dancer bewitched me while swaying rhythmically to the sweet sounds of ukulele on the stage. Glancing back out to sea, the whale had disappeared. I had found a way out… until a double rainbow appeared out of nowhere, that is.

There is a saying in Hawaii that the surrounding views add something special to the taste of its food.

“It’s onolicious,” Hawaii’s Ambassador for Aloha, George Cam, tells me as we fight over - ahem, share - a Hula Pie the size of the Big Island itself at Duke's Waikiki restaurant, named in honour of Duke Kahanamoku, the father of international surfing. The word ono means delicious and onolicious translates to broke da mouth in local slang.

Forget the mouth. I was well on the way to breaking da belt buckle as my gastronomical journey rumbled its way through the land of Aloha and its four main islands – Oahu, Maui, Kauai, the Big Island – all within a half-hour flight of each other. All with something different to offer.

From high-end resort restaurants to the rise of the food truck scene and roadside markets, there's never a dull moment for foodies.

“It never gets boring,” George says, before trumping me on the last swirl of choc fudge. "You could eat something every day in Hawaii and feel like you are having a new culinary experience each time."

When one talks of Hawaiian food, terms such as plate lunch, bento and okazuya are used to describe the style of food based on the different origins. All the dishes have a story, and where there's a poi there's also a lau lau, poke, loco moco, aku, musubi or as much sticky white rice as you can lasso with a lei.

The cuisine is as diverse as the ethnicities of the people who make up the islands, and for that reason you can island hop and possibly not eat the same thing twice… except for Hula Pie, of course.

Imagine a fusion of Hawaiian, Japanese, Chinese, Korean, Filipino and Portuguese, due to the influx of immigrant farmers into the sugar cane field industry in the 1800’s, and you'll start to get a taste for what's on Hawaii's menu. In more recent times throw in Vietnamese, French, Thai, Indian, Spanish, Italian, Greek and Middle Eastern and it's easy to see why Hawaii is carving a name as a food lover's paradise. In consummating that, many of the chefs in the top resort restaurants are bridging the food of yesteryear with dishes of the future.

At Azure, The Royal Hawaiian hotel’s signature restaurant, the concept is largely ‘fresh fish from Pier 38’ at the markets early each morning as the best of the Pacific are chosen. The menu comprises such treats as cheese selections, organic dinner salads, flame roasted seasonal fish, lobster, prawns and chilled seafood choices served on crushed ice.

Famous Maui chef and author, Tylun Pang, from the Fairmont Kea Lani’s signature restaurant, Ko, says Hawaiians are passionate about food because what they cook is part of their heritage.

“People in the islands have tremendous pride in their background and culture. Food is a very simple way for them to 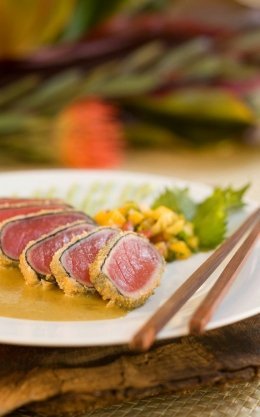 Hawaiian cuisine is as diverse as the ethnicities of the people who make up the islands, and for that reason you can island hop and possibly not eat the same thing twice… except for Hula Pie, of course. share that pride with others,” he says.

“I love the dishes that come from local family recipes. The pancit noodles and the Kare-Kare are family recipes from two of our chefs. This is the food they grew up eating. Occasionally we’ll offer a fish special, which is a whole onaga, head on, steamed with peanut oil. This recipe comes from my family… my dad used to prepare it growing up. Every time I see one leave the kitchen I feel proud that our guests are enjoying it.”

Among the standouts on the hotel circuit is the casual poolside restaurant Kani Ka Pila Grille at the Outrigger Reef on the Beach in Waikiki. While the food is onolicious, what sets it apart is the nourishment for the soul it provides patrons every evening as some of Hawaii’s top island entertainers take to the stage. Ocean House restaurant, also at Outrigger Reef, offers sea-view dining in a casually elegant venue reminiscent of a plantation-manor. The menu features Pacific Rim cuisine but is equally famous for its slow-cooked prime rib.

Over at Grand Wailea in Maui, Alan Wong's Amasia is setting tongues wagging, while the Aston Hotels and Resorts chain is building a reputation for sublime dining throughout all of Hawaii.

While all the bigger name eateries and hotel restaurants fly the food flag, another way to whet the appetite on a grassroots level is to tackle the food truck phenomenon known as Eat The Street on the last Friday of every month. At the event dubbed ‘ono on the go’, there are two basic requirements: patience and appetite.

There are large queues, so either get in early or be prepared to wait. Eat The Street is a chance to join the after-work crowds in a charge towards the most popular trucks amid the music and endless sea of smiling, hungry faces.  The approach is to sample a bit of everything, and there’s much to choose from including Asian, Italian, Portuguese, Jamaican, and many others amid an endless smorgasbord of interesting and tasty offerings.

I started with juicy, tender sirloin steak pieces with salad, brown rice and chocolate chili sauce, then it was on to Egg Poppers (waffle-like egg things with the peculiar pairing of custard and cayenne) and  malasadas (warm, puffy Portuguese hole-less doughnuts) from the famous Leonard’s Bakery, all washed down with a cup of kava juice to numb the senses. Next up was nachos with swordfish poke, musubi, Onopops flavoured ice bars, and wild won ton combinations at Paul’s Poppers.

Ultimately, in Hawaii the food is all-inclusive. You need to explore the food as much as the land. Foreign flavours and cooking styles are welcome and shared with Aloha whether on the street or at a high-end hotel restaurant.

At trip’s end, a friend rightly asked me: “So, mate, who ate all the pies?” Yes, I confess, it was I. And there's a fair chance you will, too.

Scott Podmore was a guest of Hawaiian Airlines and Tourism Hawaii.

GETTING AROUND:  There are several car hire companies on Oahu, Maui, Kauai and the Big Island, including Budget. Excellent and cheap public transport on Oahu includes a bus system and trams that are nearby or out the front of most hotels.

WHERE TO STAY: Outrigger Reef on the Beach in Oahu has had an extensive transformation and is set right on Honolulu’s famous coastline. 2169 Kalia Rd, Honolulu.

Aston Hotels and Resorts can be found on Oahu, Maui, Kauai and the Big Island.