It was appropriate the Macao Government Tourism Office and China’s Fujian Tourism would choose Melbourne’s Sea Life to launch “The Maritime Silk Road” promotion in Australia this week.

Dined and wined in a virtual fish bowl surrounded by the aquarium’s resident sharks, sting rays and array of colourful smaller fish, the two tourism bodies linked up with Xiamen Airlines to present the multi-destination promotion to 100 leading Victorian travel agents, a capacity for the venue. Prior to the dinner, the guests were presented with a theatre-style workshop with updates to each of the destinations.

“We encourage more Australians to holiday in our region, to see and experience its traditions and cultures,” she said.

During the evening presentation, a series of lucky door prizes were presented, including return Xiamen Airlines tickets to Macao via Xiamen and accommodation at the newly-opened five-star MGM Cotai in Macao. 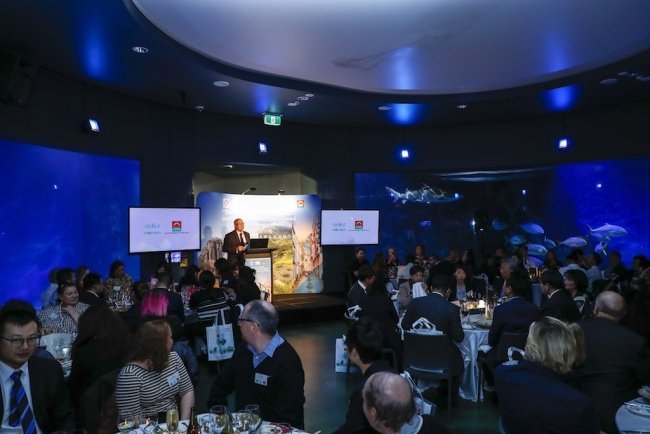 Under the co-operative, the Macao Government Tourism Office is working closely with Fujian Tourism to promote their products with the goal of boosting tourism in both destinations

Much time and effort has been put into creating and implementing the significant co-operative which, the tourism bodies agree, will further elevate this Asian region as a genuine world centre for tourism and leisure.

The initiative builds on the success of a MGTO and Xiamen Airlines co-operative campaign in 2017 which saw the creation of a “Two Cities, One Airfare” from Sydney and Melbourne.

Macao has long been a favourite drawcard for Australians, attracting a nudge under 100,000 each year, visitors who are renowned for staying between two and three nights each visit.