ADAM FORD gets a nerve-wracking introduction to India’s road rules, before settling in for a fascinating twenty four hours in the perennial capital Delhi.

I’m going to admit that I can be a little inconsistent with the indicator. Just occasionally. Well it turns out I’m not the only one with such tendencies.

We arrive at Delhi’s Indira Ghandi International Airport to be met by our driver for the short 14 kilometre trip to our hotel in the city centre. It’s a hair-raising, white-knuckling, hour-long introduction to Indian driving etiquette – where indicators are entirely optional and road rules open to interpretation.

One popular practice involves keeping each front wheel in a different lane, thereby hedging one’s bet on which lane is going to move the fastest. Problem is every other driver is doing the exact same thing. It’s crazy and chaotic, accompanied by a cacophony of shrieking horns and squealing tyres. We’re cheerfully told you need three things to survive India’s roads – a good horn, good brakes and good luck. If mine doesn’t run out right here and now I swear I’ll never cut a lane again. 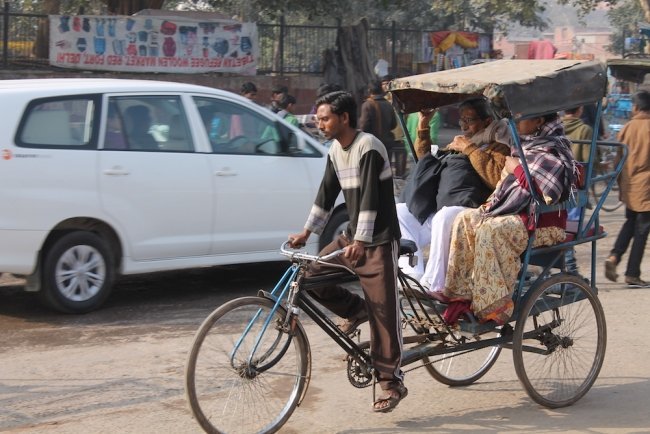 And then there’s the metaphoric highway of life on which the 1.3 billion citizens of this incredible country travel. Unspeakably tough for some; exceptionally easy for others. This is a country of extreme contrasts. It will grip your guts one moment as you gaze on abject poverty, and then treat you to unspeakable ecstasy at the sight of the next exquisite monument. And it doesn’t let up. Not even for a second.

We have one full day to explore Delhi – a big challenge for a city that boasts no less than six separate historic incarnations to uncover if you know where to look. As the morning fog lifts we begin with an early stroll through the churning Chandni Chowk market – the heart of medieval Delhi from the time of the Mughal emperors, who ruled India for almost three centuries. You’ll come across the Mughals a lot during your visit.

They left an indelible mark on the soul of India and a wealth of historic monuments to boot.  The narrow streets and laneways are choked with hawkers, hustlers, street vendors and rickshaw drivers, along with tea sellers keeping the entire affair lubricated with steaming cups of sugary chai laced with ginger and cloves. Disfigured beggars rub shoulders with wealthy merchants; harried tourists fend off lethal touts left, right and centre. It’s confronting and invigorating all at the same time. 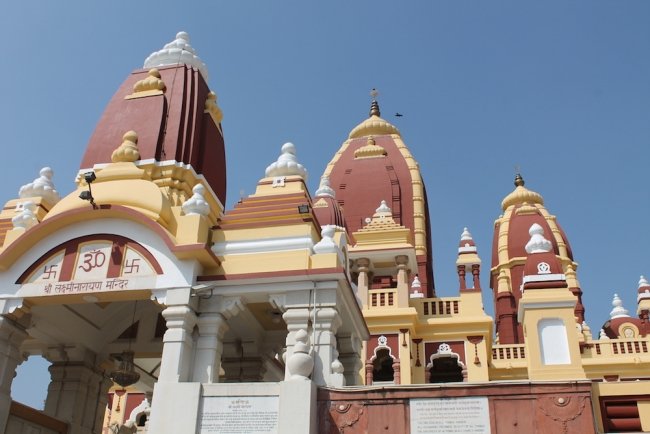 We catch a glimpse of the towering ochre-coloured ramparts of the Red Fort (closed on Mondays sadly) and pay a visit to the ethereal Jama Masjid mosque, where 25,000 local worshippers regularly attend for prayers. Next stop the delightful Lasksmi Narayam Temple – a Hindu place of worship, coloured chocolate brown and honeycomb gold. It looks good enough to eat.

Visit the local teahouse next door for another delicious, rejuvenating chai. The door is just to the right of the main entrance to the temple. The best teahouse in Delhi our guide tells us. And based on my somewhat limited experience, I’m happy to concur.

Lunch is served at a Rajdhani – a traditional north Indian restaurant in New Delhi, just off Connaught Place. Entirely vegetarian and absolutely delicious. The flavours are both rich and subtle; the salted milk curds a definite challenge. 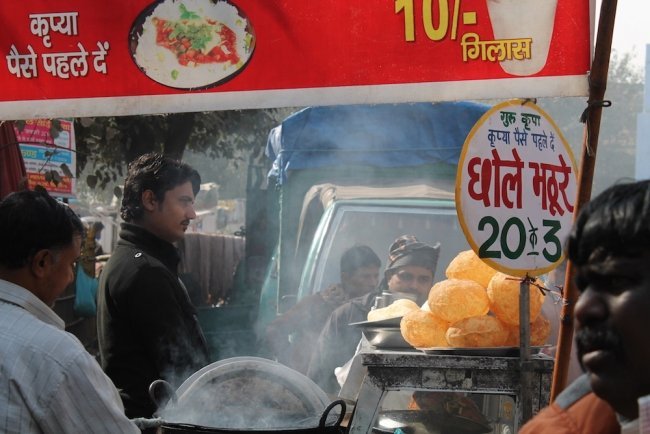 Connaught Place in New Delhi offers several shopping options for an after-lunch stroll, including an open air clothing market. However as a clearly marked target for touts you’ll be taking your life into your own hands. These guys are relentless.

Forget retail therapy - you’ll need therapy to get over it. And beware of the shoe-poo scam, where you suddenly find yourself with a gloop of foul-smelling goo on your pristine Nikes. Hey presto, a handy shoe cleaner pops up out of nowhere to remedy the situation – for a price of course.  This happened to one of our group and he swears the smell lingered on for days. 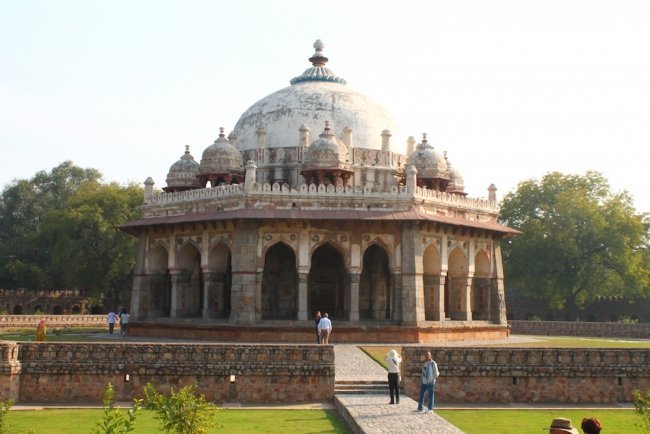 Our final stop of the afternoon is the fabulous Humayun’s Tomb – a Mughal mausoleum of divine proportions and exquisite Persian design, said to be the inspiration for the Taj Mahal itself. These ornate monuments to the dead grew grander and more opulent over time, as each generation sought to outdo the one before. Today the peaceful surrounds of the tomb are popular with locals. Indian women in their gorgeous saris stroll along the pathways offering shy smiles. Fountains dance and children play. It’s a welcome hiatus from the hectic hubbub of life outside the high walls.

All in all it’s been a fabulous day and we wearily make our way home to the baroque-esque splendour of the Royal Plaza Hotel. I attempt to turn on my trusty laptop to make some notes – using my up-until-now trusty universal adapter – but to no avail. A panicked call to house-keeping produces a knock at the door and a smiling room attendant armed with an arsenal of adapters of every shape and size. Despite our best efforts, none seem to be in working order, until finally a precarious (and probably quite deadly) daisy chain of devices brings the faint yellow charging light to life. ‘But why doesn’t mine work?’ I whine pitifully. ’Who can say’, is the soft reply. ‘This is India.’

That it is.  And we leave it at that.

Adam travelled as a guest of Wendy Wu Tours and Singapore Airlines.