Is this the best beach in Sri Lanka?

ROSHAN LEWIS joins the early morning exercisers and sunset surfers at Mirissa, and discovers why this is Sri Lanka’s best beach. 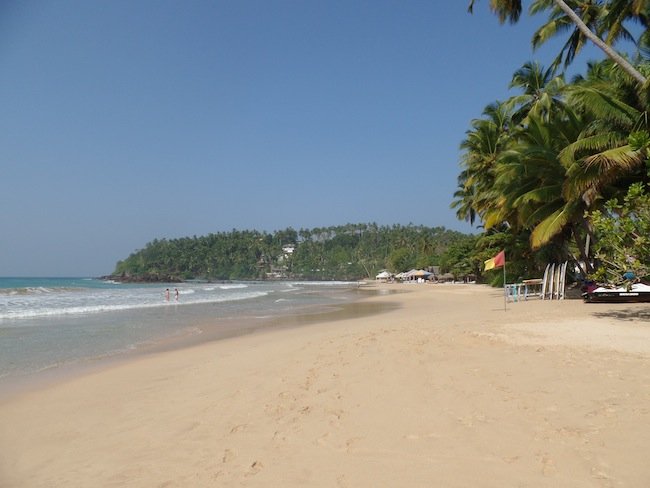 After the tsunami, the beaches on the south coast of Sri Lanka were forever changed. My previous favourite beach, Tangalle, appears to have become rockier and rougher. Unawatuna was also affected and now looks like a sandy building site.

So, I headed to Mirissa - voted best beach by both local family members and recent travelling friends. I stayed with my husband, daughter and parents at the Paradise Beach Club. The hotel was recommended by a Sri Lankan cousin who works in travel and it definitely delivered. As one of the only hotels without a waterfront restaurant attached, it is located on the quieter end of Mirissa beach. It also has the friendly staff to befit a large hotel and a pool one metre from the beach. 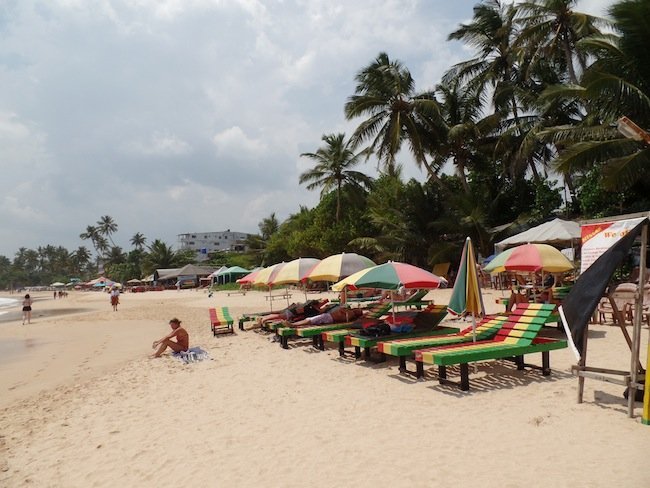 After taking in the sunset on the beach, we headed to dinner further up the beach near the centre of town at one of the beachside restaurants attached to a small guest house. We had our choice of fresh seafood and sat on a table on the sand listening to the place next door that had the obligatory reggae music playing. A little tip for such dining experiences: put your handbag on the table. Our table was accosted by waves and we had to retreat to higher ground with wet belongings!

The next day, we woke to the familiar tune of Green sleeves as the bread seller passed by and the sight of palm trees a-plenty from our balcony.

We headed into town via one of the many friendly tuk tuk drivers to take in the basic shops on the one bustling main street. We discovered an authentic roti stall where the largest roti in the world is made while you wait and I purchased a beautiful sarong that was aqua like the sea. That evening, we decided to return to town to try out a local hopper stand where we ate like kings for a pittance. 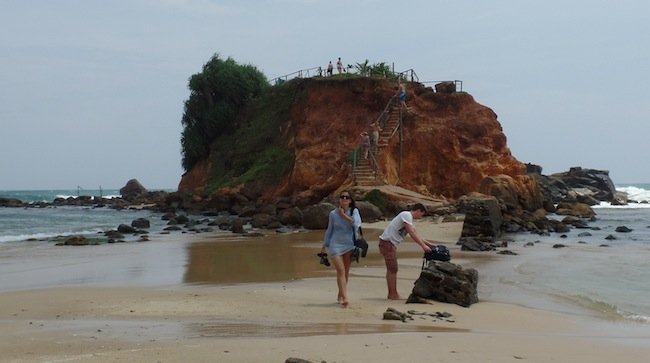 A prominent island at the other end of the beach finally peaked my interest the following day and we decided to walk along the beach and onto it. On the way we passed many coffee shops, bars and whale watching outlets (blue whales are a tourist attraction in the area). There was also a temple that could be seen in the distance and an isolated hotel retreat on a headland.

The sand that connected the beach to the island was accessible at the low tide of midday and we walked up the rocky steps to the peak, which affords a great view of rocks, waves crashing and the beach. We also discovered that the next bay is a lot calmer than our end of the beach and that most of the families with babies stay at this end.

Concluding our trip with another sunset beachfront dinner on the beach at Blue Moon down our end of the beach (without getting evacuated this time), I decided that Mirissa has enough to keep you busy, but not too much that you feel like you have to sightsee. It is the perfect beach escape to relax, get away and do nothing for a while - or even longer.