Top 10 things to do in Cochin

Cochin, in India’s south-western state of Kerala, is a lot of things: a fort, a beach, a harbour, a modern Indian city that is home to Christians, Hindus, Muslims and Jews. She wears her illustrious history well; from the Arabic and Portuguese traders travelling the spice route in the 15th century, the Dutch invasion of the 1650’s, her union to the British in the years of the Raj, and then post-independence, the emergence of the state of Kerala.

With palaces, synagogues, mosques and cathedrals standing tall along the coast of the Arabian Sea, I’ve never seen a place in which so many different cultures are so harmoniously stitched together. Cochin has been, and is a lot of things, so it’s no surprise there are a lot of things to do. Here are my top ten recommendations: 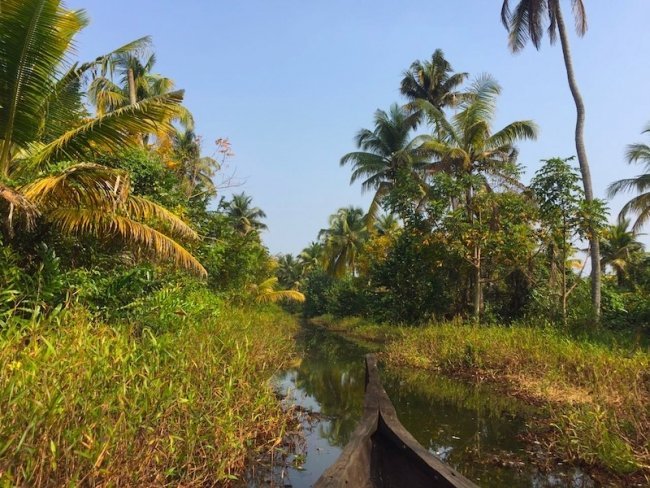 For three or four hours, you’re likely to forget yourself as you float quietly along the inlets and streams that flow through the fields of palm trees and broad leafed jungle vines. Apart from the white cranes and eagles soaring across the blue sky, the stillness is only punctuated by the soft lapping of the water as the boatsman cuts through the silky water. This is not what they call the Kerala Backwaters, these are the quiet waterways that fold their way around the little village of Poothotta. Here we watched the villagers split coconuts and craft the husk into rope, we saw Tapioca and Cashew trees blooming and sat on the riverbank drinking warm pepper tea. It was one of the most peaceful and beautiful ways to discover the hidden life of the backwaters.

Curiously, Cochin has an interesting history with the Jewish here who are said to claim roots to the time of King Solomon. Known as the Malabar Jews they are the oldest group of Jews in India and their beautiful Synagogue in Cochin is the oldest in the Commonwealth. It was built in 1567 and you can see the window frames and small square glass window panes are all original. The ceiling is adorned with a mix of etched glass chandeliers and hanging lanterns, none of them match and the room gives the warmth of an eclectic and inviting hall. It’s a quick visit but one well worth doing, especially for the rare opportunity to stand in a synagogue in South India.

Once you take a walk from here to the main shopping areas of Jew Street it’s a completely different feel from mainstream India. The streets are lined with whitewashed walled shops selling local crafts, cool arty pieces and plenty of great cafes. One of the great surprises are the craft stores and warehouses that you’ll find in the area. They’re stacked high with carved wooden artefacts, life size Trojan horses in distressed pastels, sky high carved diya’s and statuesque Gods calmly waiting to fill up lobbies and foyers and be the talking point wherever they stand. We even purchased a bench with bicycle handles and traffic lights, just because we loved its originality and style.

The Mattancherry Palace or Dutch Palace as it is popularly known was built and gifted by the Portuguese to the King of Cochin in 1555. As a tourist destination it looks fairly nondescript from the outside with flaky pale yellow paint and rain weathered walls. I don’t want to reveal the stunning surprise that awaits once you pay your 10 rupees and enter, except to say that the simple approach and grounds hardly do justice to the art and stories told inside. It’s located close to the meandering streets of Jew Town and the Mattancherry Jetty so after a ferry ride around the harbour, its one of the first of Cochin’s attractions you’ll find and well worth an hour or two of your time.

The history of Cochin keeps unfolding as you explore the many wonderful monuments of her past. We arrived at Santa Cruz Basilica at about three in the afternoon when the local convent school had finished for the day and the courtyard ceremoniously filled with young girls with double plaits in their hair all grabbing their bicycles and riding off in two’s and three’s, broad smiles all round. As we approached the Church with its double doors flung open we stood at the back and realised that the congregation inside were actually attending a wedding. After walking down the aisle in her puffy white wedding dress, the bride, in full catholic ceremony, said her vows.

Even if you don't stumble across a wedding, the Basilica is a stunning architectural testament to the strength of Cochin’s history; you see though the Basilica was spared during the Dutch conquests, the British later demolished it and it was rebuilt and consecrated in 1905. It was proclaimed a Basilica by Pope John Paul II in 1984. As for the wedding, the bridal party and their guests happily welcomed us in. 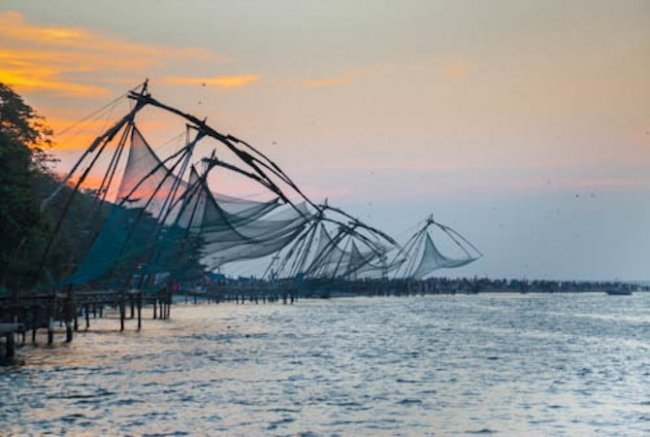 Against the setting sun with a view from the harbour, the larger than life Chinese fishing nets resemble the kind of apparatus you’d expect the Egyptians in ancient times would have used. As the arc shaped nets dip into the shoreline bringing up scores of fish theirs is a slow rhythmic operation that have now become a fascinating tourist attraction. When you see them from the land, it takes 6 men to haul the nets in, though they are designed so that one man walking along the beam can descend them into the water. Locals call them Cheena Vala and though they’re popularly thought to have been introduced by the Chinese, they were invented by the Portuguese settlers from Macau.

Taking a houseboat for a day or even overnight from Alleppey is said to be on the absolute must-do’s on your visit to Kerala and it is pretty special; not because the river itself is any great beauty but because the life that you see on the shoreline is so typical of South India, that it brings the pages of story books to life. We saw women in bright cotton sari’s hoist them between their knees as they lowered their washing baskets into the water and then beat them dry against the warming rocks. There are markets that burst open with freshly caught seafood on the muddy riverbank and school kids washing their silver thali plates on the steps that lead to the waters edge. By the afternoon, the broadening river system reaches like a horizon pool, stretching into the open waterways of the lake and the gentle breezy palm trees that lean into the water’s edge make for a picturesque snapshot. 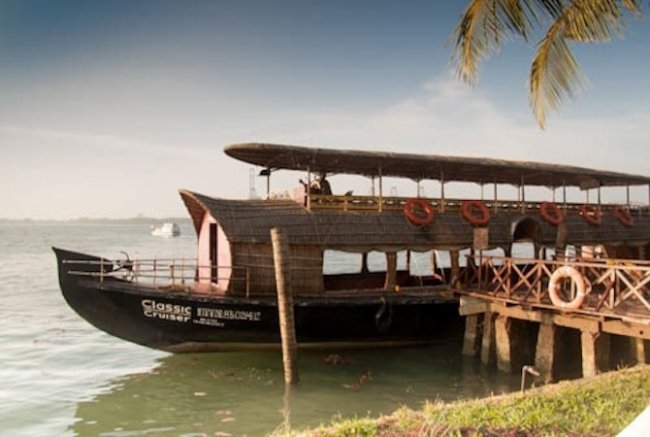 7. Dining out in Fort Cochin

Kerala was once a dry state and the first day of every month continues this tradition. Because of this licenses are expensive and difficult to obtain, so if your dining out experience includes a nice bottle, you’ll have to look around. Some of the best restaurants don’t offer alcohol, but they're known for their wonderful fusion cuisine. Because of the many incarnations of culture, Cochin’s food reflects its European and Indian heritages and seafood features on many menu’s, often exclusively. Other local foods you’ll find easily available are traditional dosa’s (there are said to be hundred’s of types) served with spicy sambar and chutneys, idli’s, uttapam’s and umpa. Oh, and plenty of coconuts; sauces, curries, chutney’s, grated, stewed and raw, they’re a staple part of Cochin cuisine.

The food is light, flavoursome and spicy and though South Indian food is widely eaten all of over India, eating the food in the region it’s famous for is always extra tasty. Apart from Hotels, the best restaurants and cafes are found in the thriving quarters of Fort Cochin close to the water.

8. Sunset cruise around the Harbour

We stayed at the Taj and so were lucky enough to jump on board their daily sunset cruise that takes you around the harbour, but there are many boats and ferries zig zagging the waterways all day and night taking in the views. As a bustling commercial port on one side you’ll see a skyline of cargo ships while on the other, the silhouettes of churches, as you sail upriver the Chinese fishing nets come into view. Just ahead there are lines of fishing vessels wedged against each other, their blue and turquoise hulls pointing towards the sea wearing the colourful crests of Christian and Indian emblems. It’s an industrious working harbour, it smells of the salty sea and gives you a glimpse of the diversity and beauty of Cochin.

The entire tip of Kerala is really a cluster of islands, linked together by the Vembanadu Lake. Willingdon Island is the largest man-made island in India and a zippy speed boat ride will get you to Mattancherry and Fort Cochin. It can seem a little confusing at first and if you’re spending a week or a few days in Cochin, with so much to do, you may only want to visit one of these island beaches. But while the north of India is in deep winter, Kerala’s all year round tropical climate gives you beachy getaways that are about as coconut tree-sandy-breezy-beachy postcard looking as you’ll find; try Lake Vypeen, Cherai Beach, Gundu Island, Vallarpadom, Bolgatty Island or Kumbalangi, the first eco-friendly tourist village in India. From the days when Vasco de Gama sailed the seas in search of trade routes, Kerala was known even then as “India’s garden of spices”. This had been a stop along the bustling trade passage between Africa and Europe from as far back as 3000BC. The local cuisine is known for its fragrant spices and it’s easy to find the many spice shops dotted across the markets of Cochin; follow the aroma. I had thought that we would find one main spice market, rather the little stores stacked high with spices are everywhere to be found. At the doorways, hessian bags spill over with peppercorns, dried chilli’s, vanilla beans and various tea’s while inside you can pick up spices already mixed together for different meat and veggie dishes or the well known local spice oils.

Oils are also famous in Kerala, particularly the healing and rejuvenating kinds used in the Ayurvedic Shirodhara massage used to harmonize the senses. Actually if I were to keep adding to this list I’d absolutely include treating yourself to a local South Indian massage; this is where the Ayurvedic holistic philosophy of well-being had its origin and with it’s blend of fragrant and calming herbs, makes for a blissful escape.

What struck me most about Cochin was just how different it is from many of India’s northern cities like Bombay or Delhi. The South as a whole deviates vastly and Kerala in particular because of its 100% literacy rate, administers a totally different social feel; we didn’t see one beggar or homeless person, the streets are cleaner and there’s simply more structure. It still has all the richness of India’s deep and fascinating culture, but it’s quieter and for a traveller, an easy and relaxed destination.