9 experiences you can only have in Wonderful Indonesia

Tripfuser’s GRACE HOMER has channelled her love for this enchanting country into a selection of the most remarkable experiences you can only have in Indonesia.

An expanse of 17,000 islands spanning 5,000 kilometres of the equator, Indonesia is a beguiling nation of incredible cultures, traditions, wildlife and landscapes. Varying vastly from one region to the next, Indonesia spoils its visitors with its enormous range of experiences on offer. 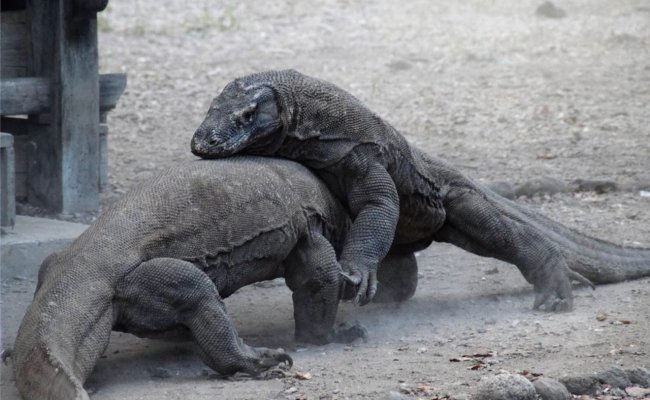 Lay eyes on one of the world’s most deadly animals

Indonesia is quite literally the only place you can encounter the fearsome Komodo dragon. On five islands in the east of Indonesia, one being Flores and the other four being the islands that make up the Komodo National Park, these animals roam freely in their natural habitat enabling a unique wildlife experience.

Weighing up to 70 kilos and measuring up to three metres long, Komodo dragons are an ancient deadly species which use their ferocious bite and the poison in their saliva to debilitate, and eventually kill, their prey.

Witness the incredible funerals of the Tana Toraja

An ethnic group indigenous to the mountainous region of South Sulawesi in Indonesia, the Tana Toraja believe that death is not a reason to mourn but a time to celebrate and therefore present some of the most unique burial practices in the world.

A genuinely fascinating affair, expect to witness a hearty feast involving the slaughter of at least eight buffalo and 50 pigs and traditional, extravagant costumes and traditional performances.

Interestingly, the bodies are then taken to a cave where they are stored and annually bathed, groomed and bought out back into the town by their loved ones. 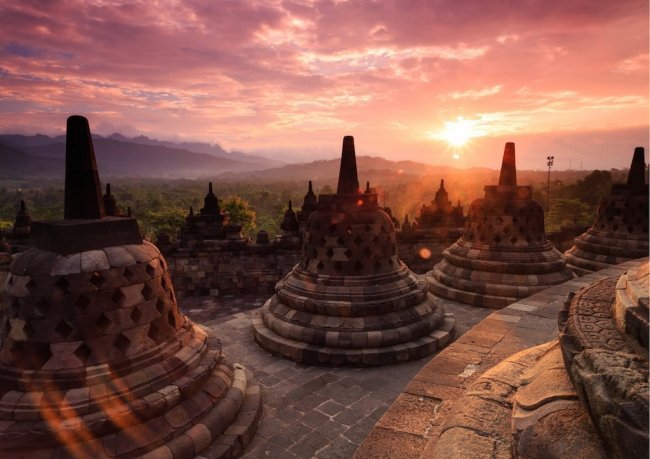 Not just Indonesia’s but one of the world’s most impressive temples, Borobudur rises from the horizon of a sleepy town in central Java.

Consisting of a total of nine raised levels each connected by steep staircases and featuring over 2,700 stone-carved Buddhist reliefs, Borobudur is an extraordinary spectacle.

The highest three levels are of the temple are open circular terraces complete with 72 lattice-style stupas; this is the iconic image of Borobudur.

Home to 75% of the world’s known coral species, Raja Ampat is a haven for divers. In the heart of the Coral Triangle which is one of Earth’s biggest marine biodiversity centres, Raja Ampat is often referred to as the ‘Amazon of the seas’ and once you delve into this incredible world, you’ll understand why.

By day, plunge into the vibrant blue water and expect to catch the likes of sharks, manta rays, seahorses, giant schools of fish and of course, spectacular corals, and by night relax in your very own water bungalow. 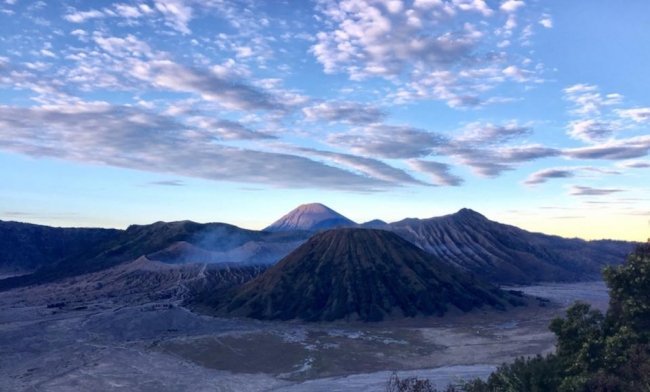 Hike to the edge of Mount Bromo’s incredible crater

Located in one of the most active volcanic areas in the world, the ‘Pacific rim of fire’, Indonesia is home to around 13% of the world’s volcanos. While it is not the biggest, Mount Bromo in Java is undoubtedly one of the most popular volcanos in Indonesia.

Spend half a day reaching the small town of Probolinggo at the foot of the mountain and rise at 3am to hike to the spectacular viewpoint to witness the sunrise, then continue your exploration across the volcanic plain and up the steep ascent to the top of the volcano’s crater lake.

It’s possible to circumambulate the crater lake’s rim, but the modest ‘safety’ rail finishes a hundred metres or so around the crater.

Swim in a lake full of jellyfish without getting stung

Nestled in a region that may just remind you of Jurassic Park, Kakaban Island is home to incredible reefs, dense forests and of course, a lake of stingless jellyfish.

It is said that due to the distinct living conditions of the Kakaban Lake, these jellyfish have evolved to be entirely stingless and harmless to humans. These funny, little dark yellow sponges also swim upside down and have no tentacles. 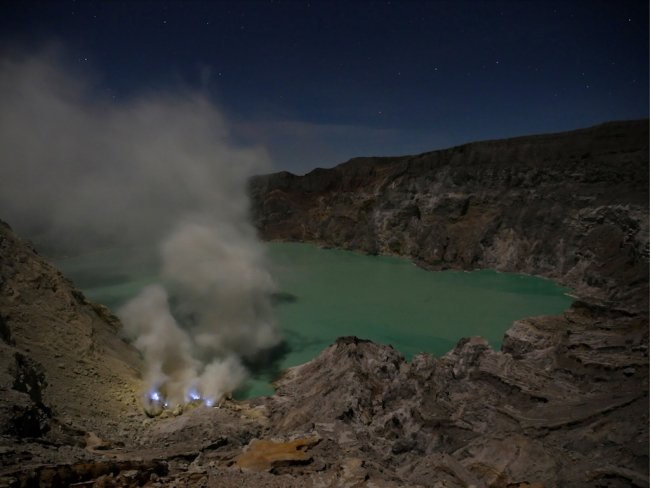 Being enveloped in sulphur clouds whilst breathing into a gas mask, watching a mesmerizing show of blue glowing lava and witnessing a spectacular sunrise of incredible shades may not be what you imagine when thinking of travelling Indonesia.

However, trekking to the crater lake of the Kawah Ijen Volcano is one of the most incredible experiences you can have in this beguiling nation. The blue glowing flames are created by the combustion of sulphuric gases being emitted from the highly toxic lake and it is an image you will never forget.

An old Manggaraian village set high in the mountains of West Flores, Wae Rebo is almost completely isolated, taking over 11 hours to reach and the last part being a three-hour hike. However, Wae Rebo is entirely worth it.

The village enables you to experience this unique way of life, understand this local community and lay eyes on their unusual cone-shaped houses.

The hike to the village takes you through an incredible area of biological diversity home to orchids, palms and an abundance of singing birds.

While Bali is known for its beautiful beaches, boutique beach clubs, incredible cuisine and enviable way of life; the Balinese culture is also one of the most interesting features of Bali.

You’re unlikely to visit this island without encountering some authentic, cultural performance but the Ogoh Ogoh festival is perhaps one of the most intriguing.

Marking the Balinese New Year, the Monster’s Parade (as its also known) is an incredible procession of terrifying and elaborately decorated paper and bamboo monster figures that dance on the back of hundreds of men.

The Ogoh-Ogoh (the monsters) are believed to scare the evil spirits away.

The following day not whisper can be heard as the locals believe that if they shut themselves in their homes, the spirits will believe the island is deserted and leave.

Connect with one of Tripfuser's Local Agents in Indonesia to create a custom-made trip-of-a-lifetime. Visit its Indonesia Trip Gallery and start designing your own adventure today.