Go behind the gates at the Guinness Storehouse

The secrets of the black stuff, the iconic Irish drink that is enjoyed around the world, can be uncovered in an exclusive new guided tour at the award-winning Guinness Storehouse in Dublin. 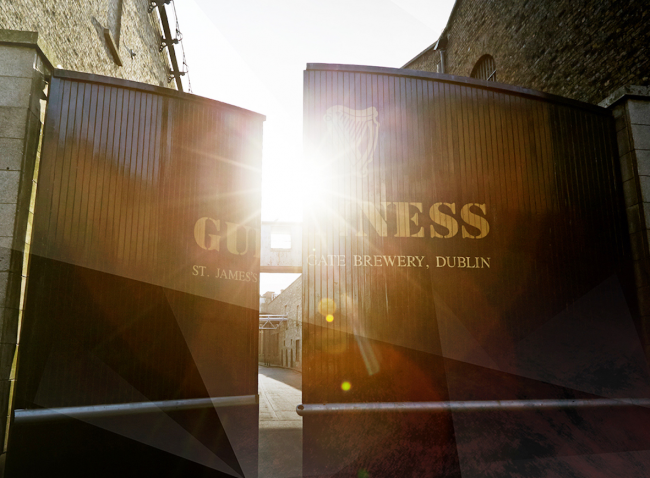 Few people have seen the inner workings of Guinness production but on this two-hour Guinness Brewery Tour, given by beer specialists, you’ll delve into the past, explore the present and consider the future of the Guinness story.

You begin the tour outside the home of Arthur Guinness, who in 1759 famously signed a 9,000 year lease for the St James’s Gate Brewery. As you learn about his humble beginnings, you’ll visit some of the oldest parts of the site including the 200-year-old Vat Houses where Guinness was matured for months before being sent to the four corners of the world.

The tour explains how brewing on site has evolved, from the types of beers brewed and methods used, to the equipment and brewhouses that were, and still are, in operation.

Next you’ll head to the Roast House to learn about the ingredients used and see first-hand the art and science of roasting the barley that provides the unique aroma and flavour in every pint of Guinness. Visitors will also experience the infamous underground tunnel that leads to Brewhouse 4, the state-of-the-art facility where Guinness is brewed today. A centre for brewing excellence, it will reveal the operation that is one of the largest, most efficient breweries in the world.

The final part of the tour takes you to the Guinness Open Gate Brewery, an experimental brewery, which has been the home of innovation at St James’s Gate since 1904. Here your guide will take you through a tutored beer and food pairing. You’ll get to sample beers you can’t find anywhere else in the world and understand the delight of pairing the right beer with the right food.

A gift to commemorate your tour brings this bucket-list experience to an end.

The Guinness Brewery Tour is the latest addition to the Guinness Storehouse experience. Dublin’s number one tourist attraction, the Storehouse spans seven floors telling the story of the stout, the brand and the city that created it. There are ample opportunities to taste the brew, learn how to pull the perfect pint and enjoy traditional Guinness dishes.