Isle see you there: take a look at the Isle of Capri

Capri is the da Vinci of islands. A true magnum opus of nature: the panache of its rocky red-orange cliffs; the blue sea lapping at the shoreline; and the elegance of its whitewashed villas; not to mention its historical charm – it’s been an attraction since Roman times.

Of course, like all masterpieces, it’s admired; in fact, up to 15,000 tourists visit the island per day in peak season. But even with its crowds and commercialisation, Capri has not lost all its authenticity.

I’m about to become an admirer. I’m on a boat, which has just embarked from Sorrento, on my way to Capri. As we sail towards our destination, the eerie sculpture of Mount Vesuvius stands in the background; and, in my admiration, I forget it’s well overdue to erupt.

It takes us about 30 minutes to get to Capri; the island is anchored in the Tyrrhenian Sea off the Sorrentine Peninsula on the south side of the Gulf of Naples in the Campania region of Italy. The ride is pleasant; the sun winks at the sea, washing away the ambition of my cappuccino until I see the masterpiece in the near distance. 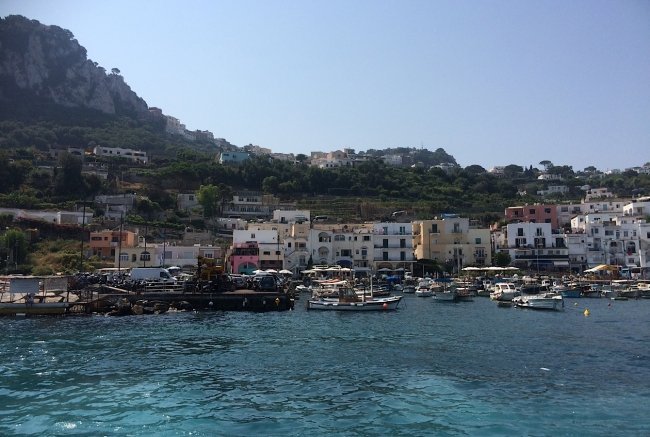 The smell of saltwater greets us as we dock at Marina Grande, the main port of the island in the township of Capri, the town sharing the same namesake as the landmass.

I don’t have to tell you it’s busy. I navigate my way through the sun kissed crowds, madly snapping their cameras, to the shops and explore the local merchandise until it’s time to board the bus and head up the aptly named Mamma Mia Road to Anacapri for lunch.

The prefix ‘ana’ means ‘up’ or ‘above’ and signifies that Anacapri is located at a higher elevation on the island than Capri; and secondly, the road is. There’s only one problem: Mamma Mia Road is not much bigger than a lane and this sliver of bitumen winds round the edge of a cliff with just a guardrail to keep you from driving over the edge.

All of a sudden, the mini bus doesn’t seem adequate; and, as it travels up the incline, it’s not uncommon to hear passengers say: ‘Mamma Mia!’ Luckily, the inhabitants know how to drive on this precarious stretch of road. I can’t resist looking out the window. The view is spectacular; beyond the rail is the vast expanse of the sea, dotted with white sailboats.

Hot and hungry, we arrive at Anacapri. I walk up the mosaic stairs, hugged with vines, to Ristorante Pizzeria Barbarossa. While I wait for my Margarita pizza, I fan myself with a brochure. It is one of the simplest yet best pizzas I’ve ever consumed. The cuisine is cooked with fresh passion. After lunch, I make my way to the seggiovia (chair lift). The chair lift station is in Via Caposcuro in Anacapri, near Piazza Vittoria. On my way, I walk past a man making shoes like they did decades ago.

The ascent, which takes about seven-minutes, takes me to the highest point of Capri, Monte Solaro. The view includes the Gulf of Naples with Vesuvius in the background, the Gulf of Salerno, Anacapri and the Isle of Ischia. I see specks of white in the water; boats. I wonder if they are at work or play. It’s too far to tell. Probably play. The weather is perfect; sun kissed seasand cloudless skies. No matter the extent of your photography skills, any photo you take will look like a postcard. 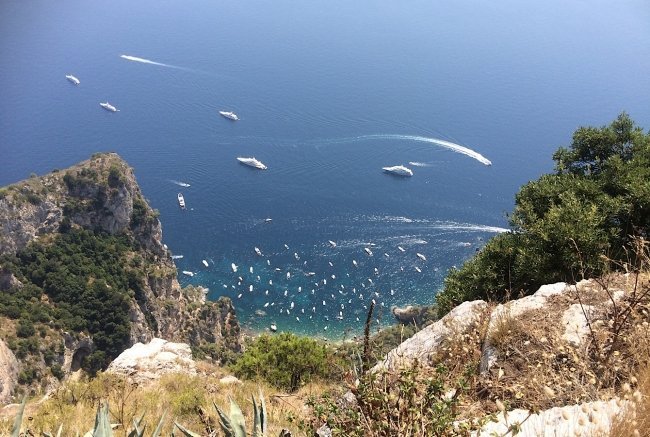 There is a café at the top and I long to have a cold drink and sit and take in the view but I don’t have time. I must get head back down to get on my boat for the Grotto Azzurra (or Blue Grotto), a sea cave. I board the bus and we head down Mamma Mia Road and to the marina to board out boat to the Blue Grotto.

The boat embarks, the hot sun beating down on us, for the Blue Grotto. I dip my hand in the pristine, blue seawater and splash some on me. We arrive about 15 minutes later. Other boats are parked outside the grotto, bobbing up and down, waiting for their turn.

I watch the others enter. The people in the boat lie down like they are in a coffin and the oarsman uses the metal chain to guide the rowboat into the grotto.

The cave mouth is only two metres wide and about a metre high. Due to this, one can only enter the grotto when the tides are low and the sea is calm. Without these two requirements, the grotto is inaccessible, impossible to pass.

The tide is rising as we wait. I, and my travellers, worry we will not make it in time. While we wait, our guide tells is that if we tip the boatmen, we can go for a swim; the men need to help us in and out of the boats.

Finally, it’s our turn. I hand the man ten euros before I get in. Everyone is positioned according to their weight and height. I am in the middle. Two people are behind me and one is in front. Everyone must lie flat. I am lying on the two strangers behind me. It feels a bit too intimate for someone I have not even shaken hands with. My heart is beating. The entrance is so small. It’s dark. Unlike my travel companions who have acrophobia (a fear of heights), I have claustrophobia. I can go to the top of anything and, indeed, I have: the leaning tower of Pisa, the Eiffel tower and the Empire State Building. But a confined space is an entirely different matter. 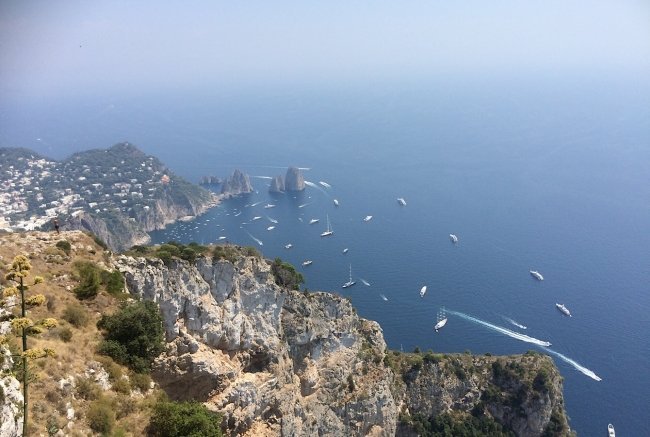 We are inside. Magnificent. The colour is as blue as an opal. Once inside, I quickly realise how high the ceiling of the grotto is and formulate an escape plan; if anything goes wrong I can jump out of the boat and swim through the mouth of the grotto – this makes me feel better.

Sunlight, which passes through an underwater cavity and shines through the sweater, creates a blue reflection that illuminates the cavern; this is what creates this brilliant shade of blue.

The cave extends about 50 metres into the cliff at the surface and is about 150 metres deep with a sandy bottom.

I jump into the cool, refreshing water. After a few minutes, the oarsmen helps me get back in the rowboat. I don’t want to leave. Before I realise it, we are outside in the daylight.

Capri. Capri. It truly is a masterpiece. Just writing this fills be with anxiety and excitement: ‘I must go back!’

• According to capri.com, high season is from the Easter holidays to the first weekend of November; but locals consider the best time to the island from the start of April to mid-June and from the start September to mid-October. I went in August and it was quite hot(and crowded), with temperatures around 30°C.

• Grand Hotel Vesuvio, Sorrento; the hotel overlooks the Bay of Naples and is right opposite Mount Vesuvius. It also has a free shuttle bus into town; just a six-minute drive: vesuviosorrento.com
• Of course, if you want more than a day, there are plenty of places to stay on the island.

Where to eat at Anacapri