A love lesson from a Japanese mask

Join GAYA AVERY as she takes the stage at Japan’s National Noh Theatre and learns that sometimes in love, as in life, the vengeful spirit mask just fits better.

“Thumbs up,” urges Noh theatre actor Yoko Layer, directing me to mimic her double thumbs up pose. I follow her through a series of actions that transforms her tall, lean body into one suddenly shorter and emanating power. I catch a glimpse of myself in a mirror: I look like a chicken. 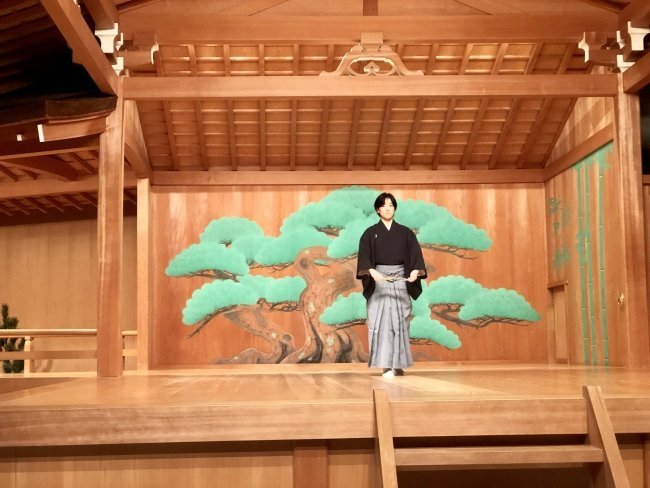 We glide forward from the curtain (or ‘hell’ for the purpose of the performance). The main stage, measuring about six square metres, feels much, much smaller and yet so imposing that I am sure all eyes are on me.

But the 627 seats of the National Noh Theatre in Sendagaya, Tokyo are empty and there is no one to catch my nervous giggle or notice that I am strangely much more comfortable wearing the mask of a vengeful spirit than I am the one of a young girl desperate for love.

Noh is like a Japanese musical, Yoko says. And its origins date back to the ninth century.

As Yoko shows me a mask with a sweet face, she tells the tale of Dojoji:

A young girl was once told by her joking father that a visiting priest would marry her. But when the girl throws herself on the priest, the priest is shocked and crosses a swollen river to the temple of Dojoji to escape her. 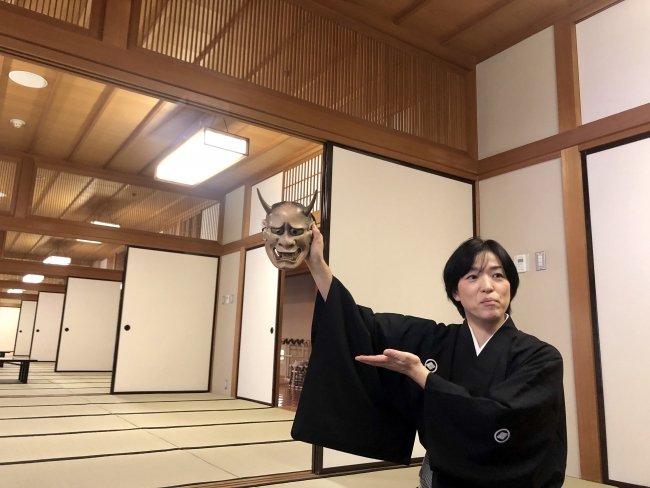 Unable to cross the river, the girl flies into a rage and reveals her evil spirit (Yoko lifts a horned mask), a giant serpent who can easily navigate the river and make its way to the priest’s hiding place.

Meanwhile, the priest has hidden himself under a bell, but the serpent soon discovers him and proceeds to coil herself around the bell. Her anger heats it and the trapped priest eventually dies. The serpent, betrayed and heartbroken also dies.

In the dressing room, already draped in a silk hand embroidered gown, I try on both masks. Apparently in the old days, women were thought to be impure and inherently evil in nature and all it took for the mask to fall was for the woman to be jealous or to fly into a fury. The ease at which the horned mask fits is thus a little worrying, but as we walk the stunning grounds of the National Noh Theatre chatting about modern life and love, the words of James Baldwin reverberate in the silence: 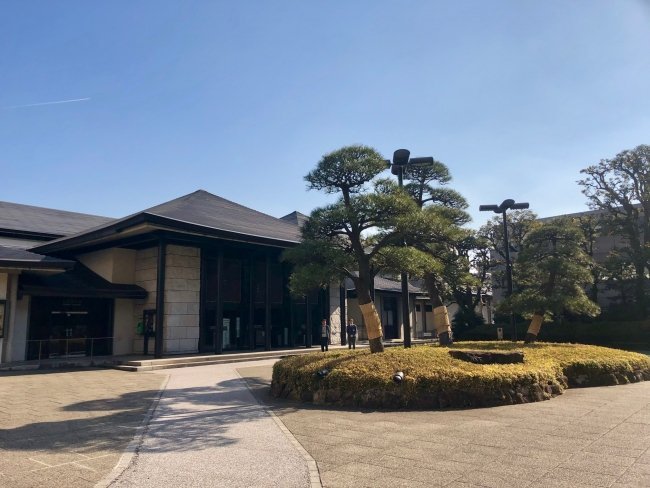 The National Noh Theatre is an easy five minute walk from either the JR or subway lines. Tickets to performances start at only 1,000yen.

Keio Plaza Hotel Tokyo has a strong relationship with the National Noh Theatre and can help guests arrange tickets and special behind the scenes tours. The hotel also hosts a special Noh exhibition during the autumn months. For more information, head to www.keioplaza.co.jp.

Traveltalk travelled to Tokyo on All Nippon Airways. Read the review of our flight here, and find out why its toilet is probably the best in the world.