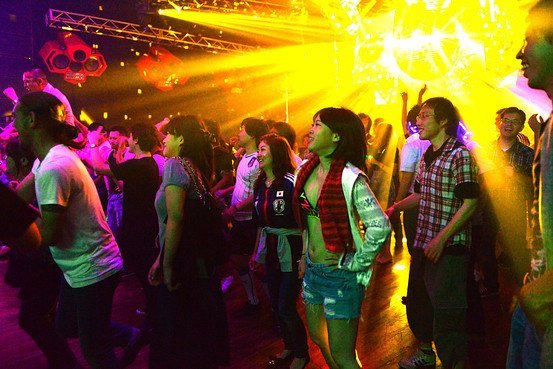 In a move that could bring to an end police raids on nightclubs across the country, Japan’s government is considering easing a law that bans late-night dancing in public establishments.

Part of an all but forgotten law (and one that evokes images of Kevin Bacon & Co in Footloose), which was passed in 1948 to combat prostitution linked to dance halls, dancing at public venues in Japan is technically only permitted until midnight in clubs with a special license.

However, following the death four years ago of a student in a brawl in Osaka and concerns about the country’s youth culture, police have in recent times renewed its enforcement of the law.

Spreading from Osaka onto Tokyo and other parts of the country, the raids have since effectively closed down venues across the nation, Reuters reported.

But now, following a public backlash against the law, and as part of a broad deregulation drive by Prime Minister Shinzo Abe to stimulate its economy and prepare for the influx of tourists ahead of the 2020 Tokyo Olympics, Japan is looking to relax the ban on late-night dancing.

To this end, Mr Abe will submit a deregulation bill, which proposes removing the clause in the law that limits dancing to clubs with a special license and bans all dancing after midnight or 1am.

Tokyo-based lawyer, Takahiro Saito, who led a movement against the law called “Let's Dance”, which submitted a petition of 150,000 signatures to parliament in May 2013, told Reuters he thought authorities were “feeling pressure as they don't want Japan to be seen as a boring place by foreign tourists”.

But despite a possible change in the law, Mr Saito doesn't foresee a total end to police intrusions into dance venues.

"If they cut the part referring to dance out of the law then at the very least they won't stop people dancing any more,” he said.

“But the police may strengthen their efforts to target problems such as noise and other nuisances to the neighborhood.

"For conservative parliament members, there is still a strong image of clubs being a place where young people cause trouble".