But for a last minute call by his guide and driver, MARK HARADA would have missed the charming town of Yufuin on the Japanese island of Kyushu. Sometimes it pays to be spontaneous when travelling.

Up until now, our day trip from the onsen (hot spring) city of Beppu, had been a relatively muted affair. That’s not to say it hadn’t been marvellous as well. 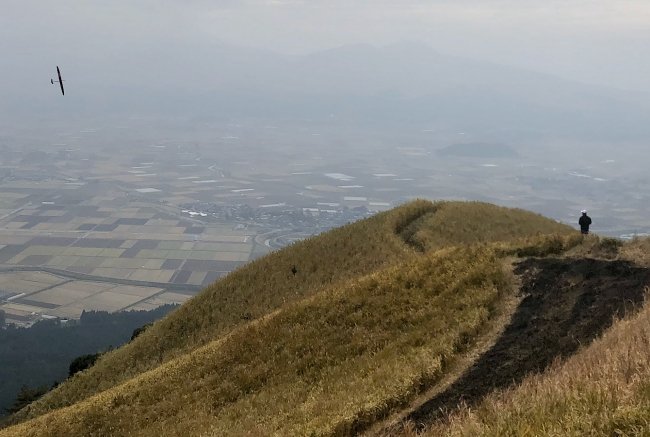 In the morning we enjoyed a lovely, nearly two-hour drive from our downtown Beppu hotel to Mount Aso - or to be precise, Daikanbo Lookout, which from its perch on the northern rim of the greater Aso Caldera affords spectacular views of the mountain - Japan’s most active volcano - and its surrounding summits. From here, the five peaks of Aso have been likened to “Buddha lying down to die”. Whether you see that or not, the 360-degree panorama is amazing.

In Aso Town, we lunched at Hana Asobi, which besides offering fantastic fare, boasts Japan’s first-ever museum dedicated to tofu - a staple in Japanese cuisine. It also resides next to one of the country’s biggest indoor rose gardens. Japan loves rose gardens.

After visiting nearby Aso Shrine, which is unfortunately still under renovation post a 2016 earthquake, we drove on through quaint villages, over winding ascents and past windswept grass fields. 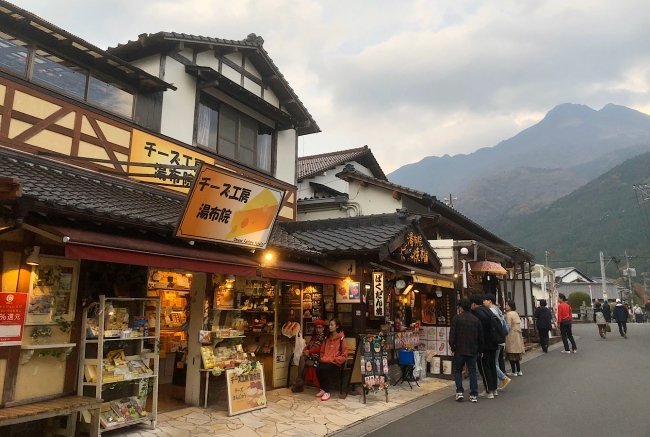 It was at this point I asked myself where all the tourists were. But that question would be answered in Yufuin, where we finally found travellers en masse, swarming in a huddle across its pretty streets.

Located around 30 kilometres inland from Beppu, Yufuin sits in the shadow of the peaks of Mount Yufu, so its natural attributes are obvious.

On the boardwalks around the town’s Kinrin Lake, visitors snap pictures of leaves turning autumn red, pink, orange and yellow. But the lake is beautiful in its own right, especially in its reflections of the nearby trees, mountains and buildings. 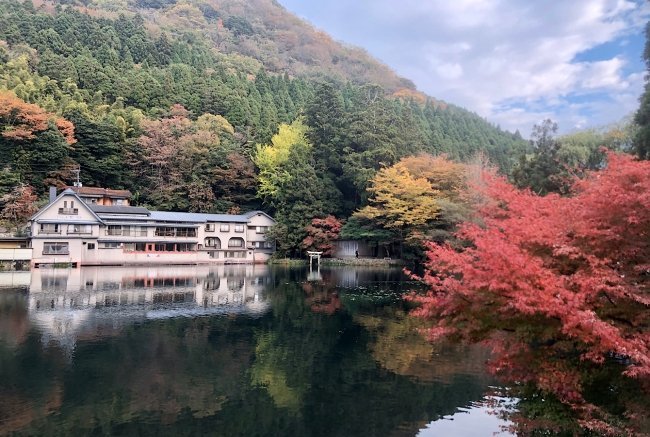 According to my guide, Atsuko, a Meiji-era philosopher once saw fish scales in its glistening surface. Since then, it’s gone by the name Kinrin, meaning ‘Golden Scales’.

From the lake’s northern shore, I pass giant persimmon trees, fried manju (local cakes) shops, homemade soba and udon restaurants and even a charming Chagall Museum on my way to Yunotsubo Street, where the bulk of activity in Yufuin takes place.

On this seemingly busy day, a Wednesday, tourists meander up and down the long pedestrianised lane wearing smiles and carrying sweets, or souvenirs, or a combination of the two. 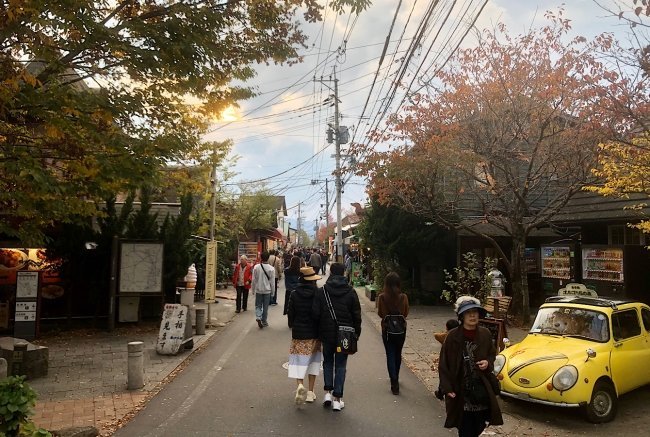 Of course, it wouldn’t be Japan if there weren’t countless eateries around. From French and German cafes (or at least the cutesy Japanese takes on them) to unmistakably (yet unusual) local fare like Fairy in the Floss Milk Cake (‘made in the shape of adorable milk grass’); straight up beer and fried chicken to more forms of cheese than you can poke a chopstick at - like a delicious looking thing called ‘melty cheese’, a Yufuin Cheese Dog and the soft boiled cheesecake at the Yufuin Cheese Factory - it’s pretty much all here.

Halfway along the street, one of the more popular places is a takeaway crab kiosk, where patrons watch vendors light up rows of crab legs with a blowtorch.

A Peanuts fan, I pop into Snoopy Cha Ya - a fused souvenir shop, eatery and ice creamery - where I summon the strength for one more snack: a green tea gelato, because I’m told the region is renowned for its dairy. 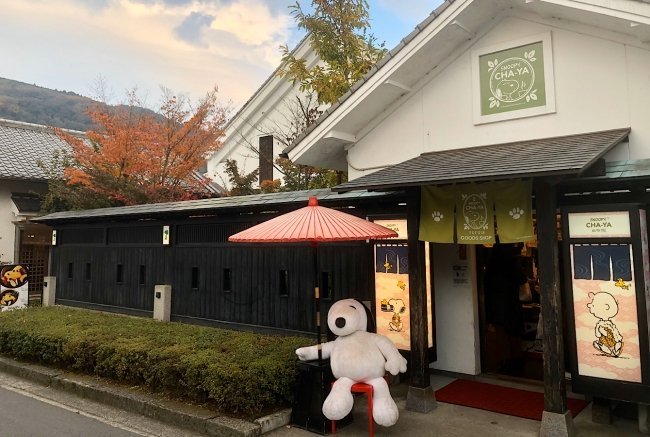 But there’s obviously more to this place than just food. Pretty side-lanes that almost don’t garner a glance reveal boutiques selling woodwork, ceramics and other curios, while the main strip boasts everything from fish spas (‘Dr Kiss Fish’) and pet aficionado stores to dog and cat cafes, where patrons can pet furry critters over frothy cappuccinos.

One of the highlights of the day is the Yufuin Floral Village, where visitors can interact with a variety of animals like rabbits, goats, ducks and owls, mingle among Japanese anime characters in the ‘Heidi’ corner and walk through a storybook-style village selling memorabilia from Studio Ghibli, Peter Rabbit, Disney Princesses and plenty more. For family-friendly experiences, this part of Yufuin is perfect. 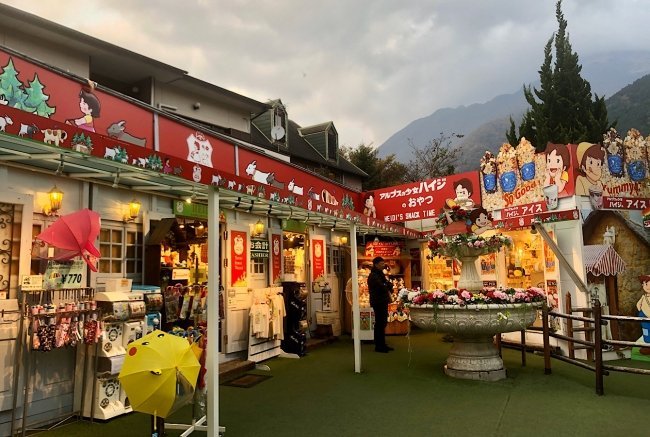 Amidst all of this, it would be easy to overlook the fact that Yufuin is an onsen town above almost everything else, with small hot spring hotels offering views of Mount Yufu through traditional Japanese rooms and steamy baths.

Luckily, we’ve had our own great views of the mountains, which Atsuko tells me are usually obscured by mist. Fog or no fog, I will be back.

While in Beppu, the writer stayed at the traditional Hotel Sansuikan onsen resort and the seaside Hotel & Resorts Beppuwan. 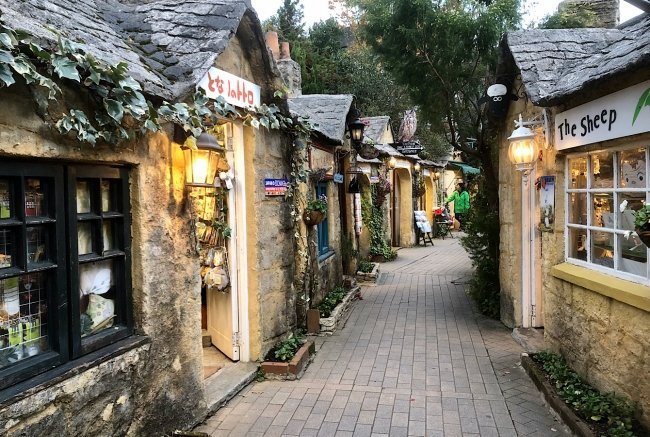