In a city brimming with UNESCO-listed shrines, historic neighbourhoods and refined culture, MARK HARADA visits an attraction that’s all action. 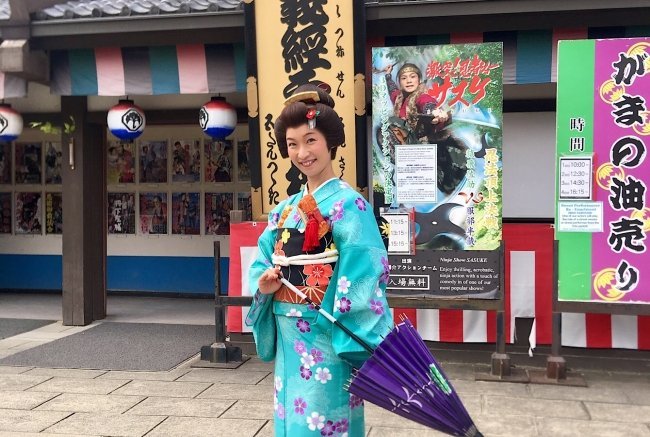 Fiery lights blaze. Henchmen are fought back in acrobatic, ninja-like swordplay. At the end, a hero, Sarutobi Sasuke, stands tall. But just as all appears right in the world, his nemesis, Hattori Hanzo, appears on a ledge to the right of the stage, voice booming.

There’s a loud clap and lightning as the samurai’s ‘sorcery’ strikes the hero to the ground. Though somehow he manages to escape, to fight another day. The audience, comprising around 80 mostly Japanese tourists - and my family - applaud.

The Japanese love their period dramas. Most are set in the Edo Period of 1603 to 1868, as this small but super stage production is (albeit with a little fantasy thrown in). It’s no wonder then that Toei Kyoto Studio Park, the only theme park in Japan where you can watch real period-piece films as they’re being made, is still going strong. Arguably Toei’s biggest drawcard, the theme park shows all feature professional film actors and are highly entertaining. This performance, called The Clash of Ninjas, takes place in the Nakamuraza Theatre, a building that could have been lifted straight out of the 19th century, save for the promotional film posters emblazoned everywhere. We also catch an Edo-era street performance here. Think busker meets prop comic, in traditional garb.

But a number of other shows take place around the park, such as the outdoor Samurai Sword Fighting exhibition that includes audience participation, and even an Edo-period classroom reenactment.

All of the shows are included in the entry price (under AU$30), and if well organised, you can catch most of the acts in around half a day. The only downside is that they’re conducted mainly in Japanese. But there’s still plenty of English spoken and written around here. 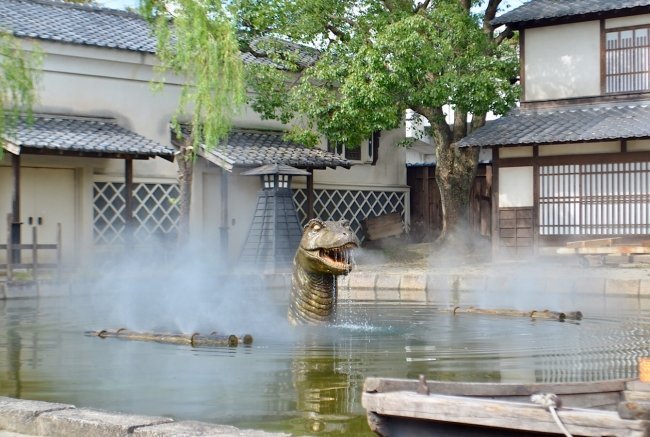 Between performances, we wander mock Edo streets, including an old red light district, cross a recreation of the original Nihonbashi bridge, and even encounter a Godzilla-like creature in Port Town. And of course, we stop to take in a live film scene or two for yet another period piece. If you’re a fan of Japanese cinema, this is undoubtedly one of the highlights of the park.

With all of this going on, we barely get time to check out the expansive Plaza or Attraction Area, which contains mazes, a haunted house and various ninja-related experiences, such as ‘shuriken’ (ninja star) throwing, a ninja training dojo and ninja mystery house (all for an extra charge). 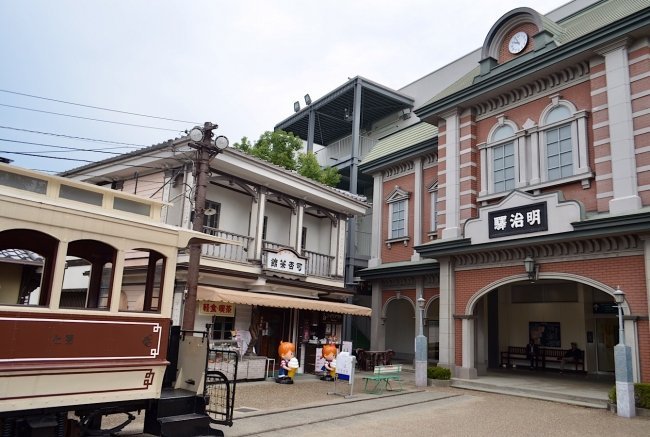 But we do have time to eat. Whether you’re up for some Japanese curry, soba noodles or even just some green (tea) ice cream or iced coffee, you’ll find it in or around the cute Meiji Street. Photo opportunities abound here too.

After checking out the nearby trick art museum and movie archives, we head inside the Studio Market, where there’s plenty of great souvenir shopping. Here, visitors can also go all out by renting geisha, samurai or other outfits. Or you can just enjoy watching the professionals ply their trade. They do it well here.

How to get there? The park is a 5-minute walk from Keifuku Railway’s Uzumasa Station or, if you have a JR Pass, you can reach the park from JR Hanazono Station (13 minutes)

Where to stay? The writer stayed at the Intergate Hotel Kyoto, a new property conveniently located close to Nishiki Market and one of the few hotels in the downtown area to offer natural hot spring bathing. Read our review of the property here. 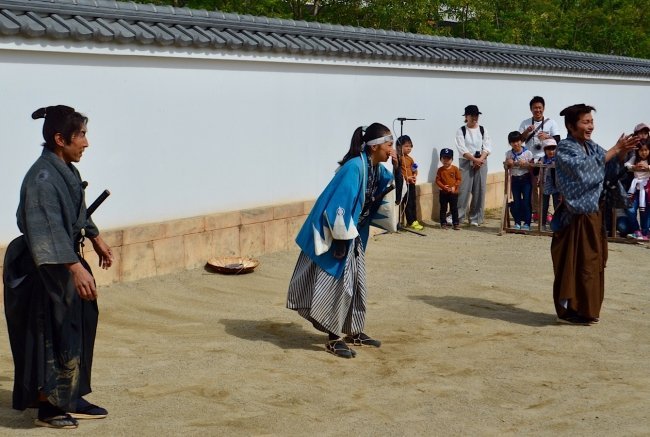