Sink your feet into this: Shinkansen adds footspas

Ultimate in relaxation on board new Japanese bullet train 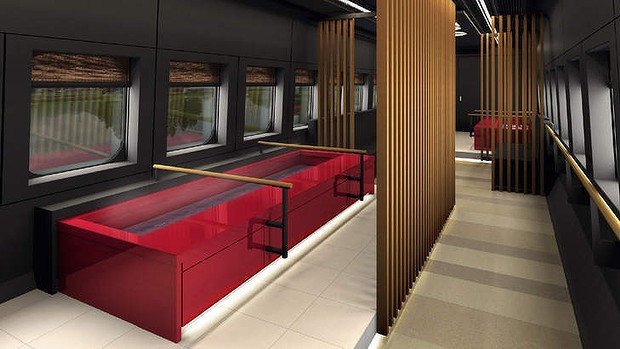 What could be more relaxing than sitting back with a glass of Kirin beer watching Japan’s beautiful countryside roll by?

How about following it up with a dip in a traditional Japanese footbath?

From July this year, East Japan Railway (known as JR East) will offer a carriage equipped with two footbaths aboard a new ‘Shinkansen’ high-speed train.

The footbaths, which are intended as places for passengers to relax rather than to clean their feet, will each measure 2.4 metres in length and face the Bullet Train’s windows.

According to AFP, the new service will be called ‘Toreiyu’ and will also feature a carriage with a bar counter and tatami-mat flooring with tables made from cherrywood.

“We are trying to offer services in which getting on the train itself is the purpose of the travel,” said JR East spokesperson Ryosuke Akaya.

The Toreiyu service, part of a campaign to promote tourism in Yamagata, will run on a 148-kilometre route between Fukushima and Shinjo City in Yamagata prefecture mostly on weekends, AFP reported.

The city of Fukushima is over 60 kilometres northwest of the tsunami-crippled nuclear power plant on the Pacific coast.