Where being buried in sand is a thing 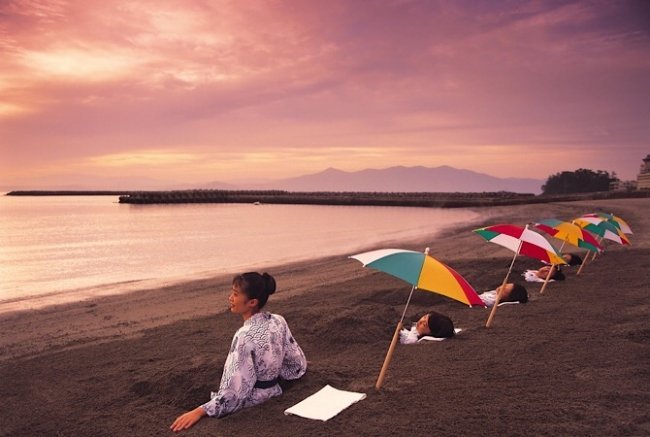 Wearing only a thin, light robe, they wander to a spot on the beach. They lay down and close their eyes. Suddenly someone appears beside them with a shovel. In mere minutes they are buried, neck deep in sand. But here’s the thing: they want to be.

At some point in life, whether as a child or as the parent of one, all Australians will be buried in sand. I don’t know the absolute stats on that, but I’m pretty sure that’s about right. And anyone who has ever been buried in sand (or really even just sat on it) is likely aware that those pesky particles can get into ALL crevices. So why would people pay to be buried in the stuff?

In Ibusuki, a beachside city on Kyushu Island in Japan, people come from far and wide to hit the beach. But it’s not the ocean in which they’re interested. It’s the sand, CNN reports.

It’s called suna-mushi, or sand bathing, and involves being buried in sand for ten to 20 minutes. The sand is about 50-55 degrees Celsius and is said to be infused with minerals from the volcanic hot springs along the coast.

For over three centuries, people have travelled to Ibusuki's sands to cure an array of ills such as  rheumatism, back pain, post-stroke paralysis, haemorrhoids, asthma, diabetes, menstrual disorders, infertility, anaemia, constipation and obesity.

And before you dismiss the practice as mere local hokum, a study by the medical department at Kagoshima University found that inhaling the steam that filters through the sand increased cardiac output and improved blood circulation by a factor three to four times greater than the steam generated by average hot springs.

So I’m guessing if you find any of these healthy bits of sand anywhere after the treatment, you should probably be thankful...