It isn’t to the cinema, a romantic cruise, or even for a nice meal

Being half-Japanese, I was often reminded that Valentine's Day in Japan was a pretty big deal. Being a chocolate lover, I listened.

It’s rumoured that more than half of the chocolate bought in a year in Japan is purchased around 14 February – and what’s more, nearly all of that candy is directed towards men (who are given the chance to return the favour with gifts on White Day, which is observed on 14 March).

But there’s more to Valentine’s Day in Japan than just chocolate. Like going to shrines.

Here are a couple of Tokyo’s most famous ‘love shrines’, uncovered by the Huffington Post:

This Shinto shrine has hearts cut into brass on its gates, roof beams, and balustrades.

With a reputation for bringing couples together, Dai Jingu is a must-visit for young Japanese women looking for love (or looking to hold onto it).

Well-dressed young ladies, most of whom have chosen their outfits especially for this visit, come here in droves to pray or buy charms such as lockets. Even Hello Kitty gets in on the romance with pair charms for dating couples.

‘Omikuji’ (fortune telling papers) are also popular, and even come in English for tourists.

Alternatively, hopeful romantics can write their wishes on the back of votive tablets called ‘enmusubi’ (meaning ‘tied together’) and hang them on the shrine grounds for the gods.

For those who don't have enough time to visit the shrine itself, Narita Airport has erected a special Dai Jingu monument in the international departure terminal. On Valentine’s Day, all the wishes placed at the shrine will be taken to Dai Jingu and burned in a sacred fire to send hopes heavenward. 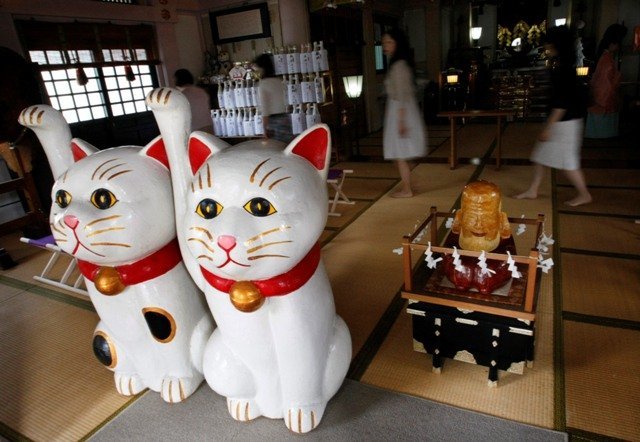 But Imado Jinja is one of the most famous love shrines in all of Japan. Every day, crowds gather here to pray for love and line up for one of the double-cat charms – essentially, love ‘to go’.

The shrine is well known for the two large cat statues that are joined together at the main altar in an iconic symbol of long lasting love.

Imado claims to be the origin of Japan’s famous lucky cat, maneki neko, which with its raised right paw, brings luck to a person.

Elsewhere, in honour of Valentine’s Day, Japan’s JR East railway company has announced through its Facebook page that it will be installing heart-shaped hand straps on trains running through Tokyo’s Keiyo Line. 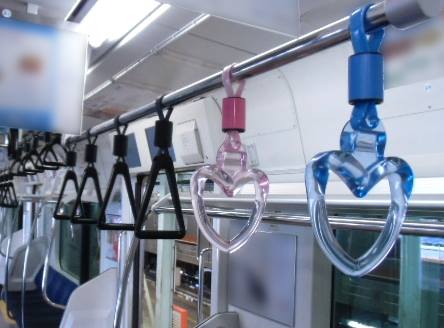 Trains on these lines usually lead to parks, shopping, and entertainment venues like Tokyo Disneyland, and JR East says it hopes this “romantic gesture” will inspire some passengers to get into the spirit of the special day and meet someone new during their commute.