Petra from another perspective

If I ask you to conjure up an image of the country of Jordan, I will almost guarantee that one image will spring to mind - the one made famous in the movie ‘Indiana Jones and the Last Crusade’, one of the new 7 wonders of the world. Of course I refer to the Treasury at Petra, the shining star of the rose red city, which was rediscovered in the region of Wadi Musa, Jordan in 1812 by Swiss explorer Johan Ludwig Brukhardt.

This amazing image was one that I was fortunate to view on three different approaches from three completely different perspectives - and at the contrasting times of the day/night. Each time it came into view, the excitement I felt recurred, and got even stronger – I don’t think I could ever tire of seeing this amazing place. 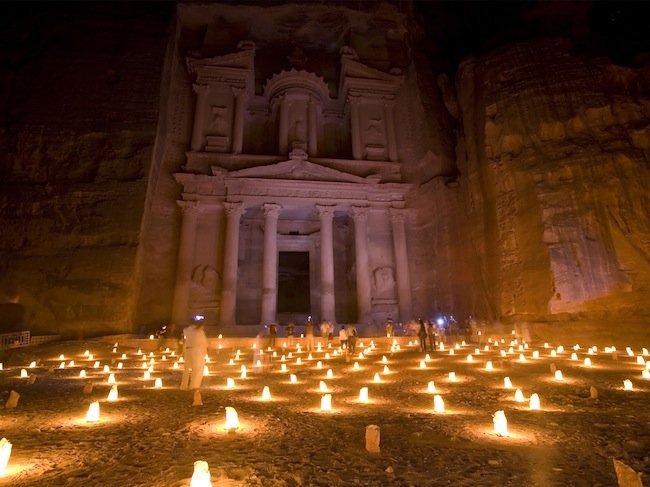 Three times a week, you have the chance to take part in ‘Petra by Night’, an excursion to see the 'wonder' illuminated by only moonlight and candles, and witness an acoustic traditional performance in front of the site. And we lucked out as a total full moon led us through the long passage. Being our first visit, we were excited to come into view of the famous façade, not knowing when that moment would be. But the journey in, was in itself, an unexpected delight.

Under shadows en-route, I could make out images in the rocks around me – were they real, was it my imagination, did I just pass by faces looking down at us, was that a temple right there? My concentration was on the changing terrain of the path, and the rings of gold cast out by the pathway of candles – my senses we supercharged, my camera was clicking, people were silent, shuffling along, shadows were long. ‘The Siq’ became narrow – the candles closer together, it got darker and the sound of an instrument playing grew louder – we were some of the last ones in as we were delighting in walking slowly, then bam! There it was – glorious! Bright orange glowing in an ink of darkness, a sea of tiny flames ebbing to the now hauntingly mesmerizing music and my first experience of the Treasury was greater than I could have imagined.

The next morning, we were up early – as a group we entered Petra, for our big day of exploration. The walk that I had encountered under moonlight 12 hours earlier, could have been on another planet – it was such a different experience, the colours and shapes within the rock corridors, were changing in front of my eyes as the sun took a new position in the sky.

Trees, shrubs, flowers clinging to the sides of the rocks, smashing out bright patches of green against the yellows, oranges, coppers and reds of the rock passageways – stunning and raw! Little Petra, was the first we came across, then ancient caves – which at first seem to be a few but as my eye became trained, I saw them everywhere. We were shown funerary monuments, initiation sites, temple caves and dedication points. The terrain changed about halfway through, from gravel and rocks underfoot, to stone and sand. The walls narrowed and become sheer and I spent more time gazing up whilst walking through. This was only the beginning – The Treasury is merely the ‘first’ major point in front of an entire city, of 800+ monuments. Third view – Petra from above – The secret entrance!

We started the same way, but beyond that we were led to an undisclosed pathway which was an immediate climb, and marked by rock markers and indicators. There were ridges, small valleys, scrambling, flat sections, more stunning caves, footholds and times the best route was to slide down on our bottoms. The diversity of this trek was a highlight already. Two and a half hours after the commencement – we were sweaty and dusty and we made a climb onto a ridge. Our guide was beaming, he had a surprise; he urged us to go to near the edge of the platform we had reached and peer over the side – WOW!! We realized we were looking down over the façade of the Treasury over ‘The Siq’ where people were entering for the first time in awe, way down below us. No one seemed to know we were there. We had a birds-eye view. It was exhilarating!

If you ever get the chance to experience the amazing 7th Wonder of Petra for yourself, my advice is ‘Don’t Hesitate – get On the Go’!

For more information head to www.onthegotours.com/Jordan.