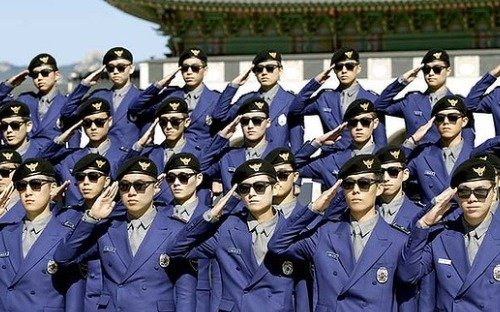 With uniforms designed by Kim Seo-ryong, who also designed the outfit Psy wore for his Rockefeller Center gig last year, Seoul’s tourism police have a distinct look about them, which, according to the Culture Ministry’s Tourism Bureau director general Shin Yong-eon, is exactly the point.

“We expect the tourism police wearing unique outfits to act as tourist icons much like the soldiers doing the guards ceremonies at palaces,” the director general said.

But the tourism police aren’t just there to look cool, they have been hired to meet the demands of tourists to popular destinations in Seoul, the Korea Times reported.

While the tourism police did dance along to Gangnam Style at their recent inauguration ceremony, don’t expect them to get into formation at the whim of every tourist – though it looks like they’d definitely be up for a picture or two.