Borneo - the land below the wind

Sabah, formerly British North Borneo, is an eco-tourism paradise. The wildlife here is truly unique – you’ll find nothing quite like it anywhere else in the world. And it’s here in abundance. 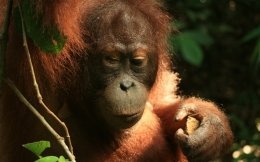 One of the gorgeous residents of Sepilok Orang-utan Sanctuary

Borneo was a country I read about as a kid as one of the last really wild frontiers. A land of dense jungle, uncharted territory… And head hunters. It’s a country I’ve been intrigued about ever since, for its rich history as a remote British colony and more recently for its unique wildlife.

It has of course not been known as British North Borneo for a long time. And while heads are still known to adorn the homes of some tribal chiefs, the tradition of head hunting stopped long ago.

Malaysian Sabah is famous now more than anything for its population of orang-utans and proboscis monkeys and an emerging eco and adventure tourism industry. Tourists come here for three reasons: to photograph the wildlife, go diving or climb Sabah’s most famous landmark, Mount Kinabalu.

Sabah is one of three Malaysian states situated on the island of Borneo. Our flight from Kuala Lumpur to Sandakan on the north east coast, takes about four hours.

As we fly in I’m wracking my brain: “why does this name ring a bell?”. It was known in it’s hey day, then capital of a bustling British colony, as “Little Hong Kong”. But that’s not why it rings a bell. It’s World War II that rings a bell. The Death March. 2700 ANZAC and British soldiers died here during Japanese occupation. The airstrip we land on was built by them. I’m not sure this part of WWII history was covered very well in my schooling and I’m rather ashamed of it.

But that was another lifetime. I don’t imagine the POWs thought much about the unique wildlife around them then.

We check in to the Hotel Sandakan, a comfortable three and a half star hotel and our base for the week. After a very welcome shower and change, we meet our guide, Jame, for our first little foray into town.

Jame takes us to Kampung Sim Sim – the birthplace of this settlement 100s of years ago, a village built on the water by the Bajoi – sea gypsies – before heading for the central markets for a spot of shopping.

This is of course a Muslim state and we’ve arrived smack in the middle of Ramadan – a month of daylight fasting. Every evening the waterfront streets are lined with the hawker stalls of the Ramadan Bazaar and it proves to be the best place to go for dinner. We feast on noodles and satay for as little as four Ringitt (about $1.60).

We’re woken bright and early on Day 2 for our first wildlife encounter, at Sepilok Orang-utan Sanctuary. The sanctuary was opened in 1964 and since then over 400 orang-utans have been rescued and released back into the jungle.

The main threat these animals face is loss of habitat. As more and more rainforest is replaced by palm oil plantation, hundreds of young orang-utans are orphaned.

As we wait patiently they come in one by one from the jungle to be fed, show off and pose for photos. They’re completely adorable and you can understand why villagers take them home. (I want one.)

A visit to Sandakan War Memorial follows. It’s quite a serene place considering the history of this site. Towards the end of the war Japanese forces marched what was left of the 2700 prisoners held here inland to Ranau, though virgin jungle in unbearable heat. Only six survived. 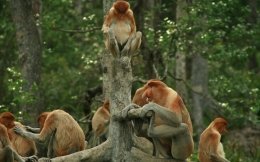 Proboscis monkeys are also known as Monyet Belanda (Dutch monkey) and Orang Belanda, the Malay word for Dutch man, as the locals noticed Dutch colonisers also had large bellies and noses. and hawksbill turtles come to these three islands, 40 kilometres north of Sandakan in the Sulu Sea, every single night. Each night, around 30 turtles come ashore and between them lay several thousand eggs.

We’re allowed to stay only one night here on this picture-book desert island, so we make the most of it. Grabbing snorkel and flippers we head for the beach and bathwater temperature water teaming with colourful Nemos and Dorys.

The turtle action starts after dinner as rangers allow us to watch one of these massive beasts lay her eggs. She manages a rather shabby 45 eggs before settling down for a well earned rest. While she’s resting the ranger takes all her eggs and moves them to the hatchery – a patch of fenced-off beach where the eggs are protected from predators such as the many monitors prowling the island.

It seems rather unceremonious but it does increase their chances of survival – even from each other. Because so many turtles visit here each night, they’re likely to dig up and destroy another’s nest and lay eggs on top of it.

The evening finishes with something special – perhaps the highlight of our whole trip – we get to set the little hatchings free. They are gorgeous. About 60 little turtle hatchlings, each less than 7cm long, frantically scrabble for the water as we wave them bon voyage.

After a windswept trip back to the mainland we hop on another boat this time headed up river in search of more wildlife. So far we’ve been pretty lucky spotting wildlife. Either that or its here in such abundance you can’t miss it.

Our lodge is located on the river front near the town of Sukau, 42km south east of Sandakan.

After a high tea, we head for a more intimate cruise along one of the river’s tributaries in search of our lodge’s namesake. We don’t have to wait long. My daughter is the first to spot one of these bizarre looking animals, and before long, we seem to be surrounded by them.

To our left, a large family settles down for the evening, young ones squabbling over preferred positions in the tree while their mothers berate them and try to calm them down. To our right there’s a bachelor colony prancing around and showing off.

Further upstream there are pygmy elephants, orang-utans, gibbons, macaques, hornbills and we even spot an owl before heading back to the lodge for the night.

Our next stop the following day is Indiana Jones’ Temple of Doom. Seriously. Gomantong Caves are famous for the bird nests found here. The nests are a Chinese delicacy and each one will fetch thousands of dollars at market.

The first thing we notice as we approach them is the smell. Guano. Above us in this enormous chamber, sparrows and micro bats flitter about as we traverse around the perimeter on a wooden boardwalk.

In the centre of the cave is a huge mound of bat and bird droppings and as we look a little closer we realise it’s moving. It’s then I realise the boardwalk is also moving. Cockroaches and centipedes scuttle about underfoot, on the handrails and the walls of the cave next to us.

To be honest our guide forewarned us to wear covered shoes but my trainers seem rather inadequate. Heavy-duty gumboots may have been a better choice.

So from the ridiculous to the sublime, our last lunch is Sandakan is at the English Teahouse and Restaurant. It’s a blast from the British colonial past. A traditional bungalow replete with parquet flooring, elegant rattan chairs and wooden ceiling fans on a wide veranda.

There’s even a game of croquet set up on the manicured lawn. It’s a peaceful little oasis looking out over the city and a great place to sit and reflect on the past week’s adventures.

Malaysia Airlines has connecting flights from Sydney and Melbourne to Kuala Lumpur and on to Kota Kinabalu and Sandakan.