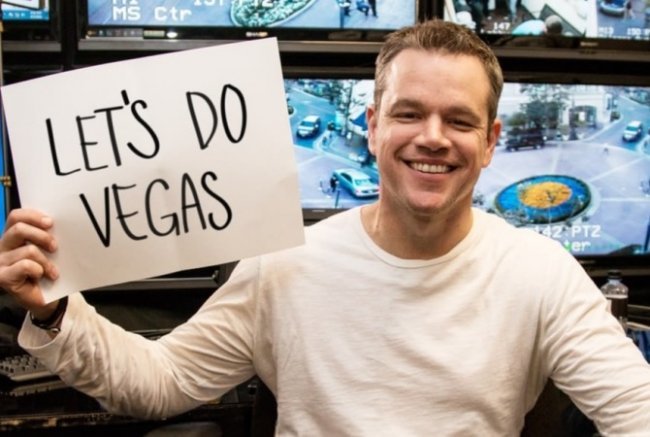 Get your fill of Vegas on film with our insider tips below:

Excitement built throughout the course of filming the popular spy-action movie series as visitors gathered to catch a glimpse of Matt Damon, who returned for the blockbuster franchise’s fifth installment in July. Intense scenes were shot throughout ARIA’s convention space, casino and valet in addition to an unbelievable chase sequence along Las Vegas Blvd, featured in the movie’s trailer.

In the film, Bourne attends Exocon, a high-tech convention of hackers. ARIA and its convention center stood in for the conference during filming. Currently, ARIA’s convention center is undergoing an expansion that will deliver an additional 200,000 square feet of technologically advanced, flexible meeting space across four stories. The space will feature stunning indoor/open-air spaces and a glass-enclosed venue with views of The Strip’s first park and the new T-Mobile Arena.

INSIDER TIP: To explore the entire ARIA campus as seen in Jason Bourne, take a tour of its Fine Art Collection, with pieces by renowned artists Maya Lin, Jenny Holzer and Tony Cragg spread throughout the lobby, restaurant corridor and entrances.

Ocean’s Eleven, Twelve and Thirteen feature Hollywood’s most legendary talent, in addition to some of The Strip’s most quintessential resorts. Danny Ocean and his crew plan a vault heist in Bellagio in Ocean’s Eleven, featuring extensive shots of the casino floor and the famous Fountains show. Bellagio’s executive offices make an appearance in Ocean’s Thirteen, as well.

INSIDER TIP: Members of MGM Resorts’ M Life Rewards Program can select the song for The Fountains of Bellagio show, so they can earn points and recreate the final scene of Ocean’s Eleven.

INSIDER TIP: Let loose like the group at LIQUID Pool Lounge, where a DJ keeps the energy high at this upscale adults-only environment with two luxury VIP pools for sophisticated poolside fun.

The 2013 thriller about a group of world-famous illusionists filmed its intense FBI heist scenes throughout ARIA. The four main stars were grilled by agents in one of the two-story Sky Villas, and arrested on the main casino floor.

INSIDER TIP: To live luxuriously like the magicians in the film, book a stay in ARIA’s Sky Suites. Enjoy incredible amenities, breathtaking views of The Strip and a private pool reserved exclusively for guests of the Sky Suites.

This 2008 sequel to one of the most beloved movie series of all time follows Rocky Balboa’s return to the ring as a formerly retired fighter preparing to box a reigning heavyweight. Rocky Balboa filmed its pinnacle fight scene between Rocky and Mason Dixon at Mandalay Bay’s Events Center, in the same arena that UFC hosts its fights.

INSIDER TIP: For those looking to experience a fight, WWE is hosting NXT LIVE in December.