A guide to the NEW New York

Just when you thought you had a handle on New York, the Big Apple has gone and got a whole lot bigger.

It’s a sentence I’m hearing a lot of late: I’m heading to MoMA, they say, as though MoMA were ours and just down the road.

What they mean, of course, is MoMA at NGV. From now until 7 October, Melbournians and those visiting this great city can gain access to an exclusive-to-Melbourne exhibit bringing some of the most iconic pieces from the Museum of Modern Art, New York to the National Gallery of Victoria.

And it’s the perfect place for NYC & Company to share the MANY developments and openings set to debut in New York City next year.

MoMA is currently undergoing renovations and an expansion which will see the museum increase gallery space by 30%. Completion has been set for mid-2019.

2019 will also see the opening of the new Statue of Liberty Museum (set for a May debut) and, in November, Staten Island will welcome the opening of the 100-store Empire Outlets (yes, that means you’ll want to stay on the island, rather than just taking advantage of that free ferry ride).

But perhaps the biggest news, and certainly the biggest development (in fact it’s the largest private real estate development in US history) on the horizon is the opening of Hudson Yards on Manhattan’s far west side. 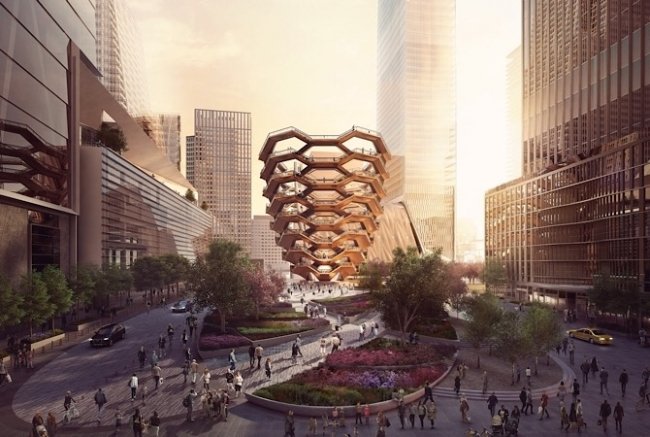 The centerpiece of Hudson Yards will be the Vessel, set to be the city’s newest public landmark, comprised of 154 interconnecting flights of stairs (that’s almost 2,500 individual steps) and 80 landings.

Hudson Yards will also feature the highest observation deck in the US (fifth highest in the world) and The Shed, New York City’s first multi-arts center with a moveable outer shell that deploys over the plaza adjoining the building to provide a 120-foot-high, temperature-controlled hall.

So while 2019 is indeed bound to be monumental, fret not if you’re heading to New York later this year. You’ll have enough new things to explore that weren’t there on your last visit (Domino Park on the Williamsburg Waterfront for example) and it is impossible to get a fix on the city anyway.

The city’s skyline, like the street art that adorns Melbourne’s Hosier Lane is ever-evolving and over-written; that the city changes is one of its best features (and what makes New York so attractive to repeat visitors).

So if it’s been five weeks or five years since your last visit to NYC, chances are you’ll have some catching up to do. Big time.