It was nearing the end of lunchtime and I was hungry. The crowds were haunting the nearby delicatessens as if an apocalypse was scheduled for that afternoon.

I’d breakfasted on an everything bagel, so was full of vegan cream cheese, carbs and the kind of New York chutzpah that can only be acquired after battling the bubbas at the Upper West Side’s famed Zabars.

But a trip to Barney’s mid-season sale soon had me hanging for a quick New York bite (along with an urge to never again tackle hoards of bargain-hunting women when armed with only naiveté, a conscience and an itchy credit card).

A vegetarian Aussie in Manhattan knows the veggie hot dog vendors in Chelsea, the tiny Buddhist lunch joint in Chinatown and where every Wholefoods is on the island, but then a friend who worked at the Museum of Modern Art told me I just had to try falafel from a food cart parked at 53rd and 6th.

On offer was seasoned rice, halal meat or falafel, and salad. And the line up for this humble fare stretched around the corner.

Eight people in and I knew what I wanted. Rice, salad, falafel and extra hot sauce (it’s hot sauce, not chilli sauce in the US).

One by the one, the people in front of me drifted away with steaming foil containers, each knocking back the proffered hot sauce. Amateurs, I thought. 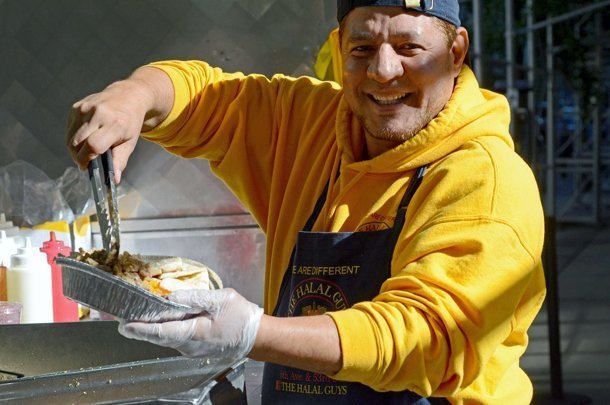 When my turn came, I recited my order as practiced, “Rice, salad, falafel and extra hot sauce please.”

The server (New Yorker 1) paused before assembling my order. He looked me up and down and, I can only assume, saw in my multi-racial features some sort of confirmation. He dribbled on some hot sauce.

“Are you sure?” Asked the person behind me (New Yorker 2).

“Are you sure?” Asked the person behind them (New Yorker 3).

“Maybe you should get the white sauce,” suggested another (New Yorker 5).

But I’m Australian. This means two things. One: I’m good at queuing. Two: I’ve been brought up believing Australians are tougher than the average Joe (particularly the American ones who play football with helmets).

“I’ll be fine,” I assured with a smug pursing of my lips.

After declining the two offers of a drink from the server (can you believe the upsell?), I walked over to what was either cement seating or an art installation and sat down.

The huge serving had set me back a total of $6 and I intended to enjoy each delicious dollar. 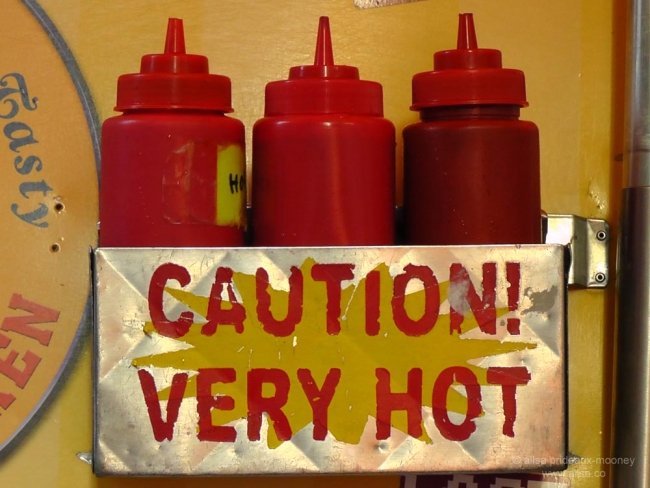 The server had poured hot sauce over only one side of the serving so I started spreading it over the rice, and hell, even over the salad.

I licked the plastic spork and it was then that I realised the hot sauce was, indeed, quite hot, but it was still nothing compared to the delicious but deadly roasted chillies from Mother Chu’s circa 2004 or even the raw chilli-off of 1992 (I did primary school hard).

I took another bite. And then it happened. I was already panting, trying to get some relief to my burning lips, tongue and throat (but that’s the kind of heat I like) when the wax in my ears started to melt. My eyes began to water. And in the time it took to take a breath, I realised I couldn’t.

What had been dog-like panting was reduced to an awkward miming of someone choking on air. Tears were running down my face as if they were a build up of excess steam.

I kept trying to breathe out, but it was like my chest was a balloon being inflated by an old man with asthma, each shallow breath blowing me up and filling my lungs with more heat.

Even in this state of panic and now real pain, I refused to admit defeat and go back to the food cart for water. Instead, I half-ran, half-stumbled through the streets, arms outstretched, begging for a drink. After all, I had my pride.

It was then that I saw her. She was holding out an ice cold Snapple with a knowing smile. I threw some money at her and chugged the sickly sweet concoction. I swear I could hear the hissing of my insides as the fire within squeaked into submission.

“Hot sauce?” She asked, handing me another drink and some paper napkins.

I nodded, mopping up the Snapple/sweat from my chin and under my arms.

And normally, the sarcastic cynic inside me would have inwardly commented on the stating of the obvious or made some illogical connection that had the server of the hot sauce in cahoots with this woman to take advantage of poor gits like me, but not today.

Because, visitors to New York City, know this:

The New Yorker you’ve read about, the one who pushes and shoves tourists into the black sludge of the sidewalk may exist, but maybe, just maybe, they’re running for hot sauce relief.

While the New Yorker I know, the one that rushes to help when they see an open map and a confused expression, the one that helps you figure out the subway system, the one who tells you the places to go and the ones to avoid, these are the New Yorkers who just may save your life.