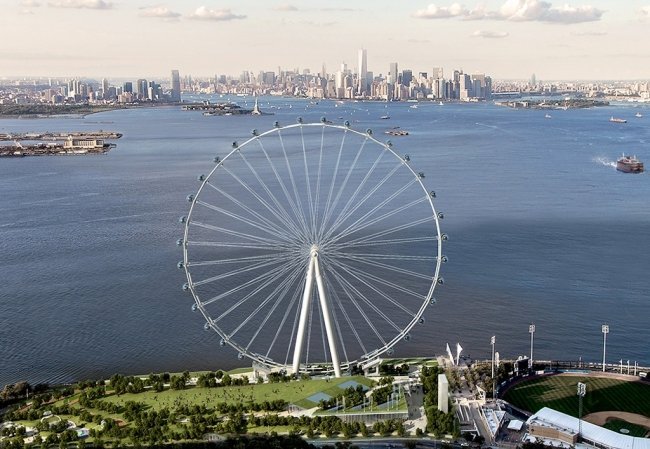 Staten Island’s St. George waterfront, with its spectacular views of Manhattan, New York Harbor and the Atlantic Ocean, is set to be transformed into one of New York City’s top tourism destinations with the start of construction on the New York Wheel and Empire Outlets later this year. These new projects – one of the world’s largest observation wheels and New York City’s first-ever retail outlet complex – are expected to attract over six million visitors to Staten Island annually, making them among the City’s top tourism drivers in the coming years.

“Staten Island looks forward to a renaissance on its North Shore and welcoming visitors from around the world to discover its cultural and historic gems as the Wheel and Empire Outlets help transform Staten Island into an exciting world-class destination,” said Staten Island Borough President James Oddo.

The New York Wheel will stand 630 feet high, with incomparable views of New York City, its harbors and bridges and the ocean. Empire Outlets, which is being built by BFC Partners, will feature world-class retail, a 200-unit hotel, restaurants and parking. Built next to the St. George Ferry Terminal, the complex will serve both the two million tourists already riding the Staten Island Ferry each year and NYC residents.

“The redevelopment of the Staten Island Waterfront will undoubtedly attract millions of new visitors and spending to the area and reframe the entire visitor experience – getting people to explore beyond the ferry terminal,” said Fred Dixon, president and CEO of NYC & Company. “More than 54 million visitors come to New York City each year, and we want to get as many of them as possible to experience Staten Island – what makes it so uniquely New York City and what makes it its own destination.”

“We are excited to play a part in putting Staten Island on the world stage, and we have made a significant investment to create a world-class attraction that will change the New York City skyline and attract millions of New Yorkers and visitors annually to Staten Island’s North

Shore,” said New York Wheel CEO Rich Marin. “Once this complex is complete, Staten Island will attract millions of visitors, and with world-class shopping, dining and accommodations, Staten Island will be a true destination for locals and visitors.”

“As the first and only outlet center in New York City, Empire Outlets will offer a unique and unparalleled shopping experience for New Yorkers and tourists alike,” said Joseph Ferrara, a principal of BFC Partners. “Currently, residents and visitors need to drive west to New Jersey or north to upstate New York in order to enjoy access to exclusive brand names and the affordable quality apparel retailers that are found in other leading outlet centers. Empire Outlets will recapture that economic activity for the first time in the city’s history. We have received an incredible amount of interest from retailers around the globe and look forward to major leasing announcements later this year.”

Opening in late 2016, the New York Wheel will feature 36 capsules, each carrying up to 40 passengers. The roughly 60-story attraction will be the tallest observation wheel in the Western hemisphere, accommodating as many as 30,000 visitors per day. The New York Wheel will be open seven days a week, approximately 350 days per year (accounting for severe weather days and maintenance) from 10 a.m. to midnight and staying open as late as 2 a.m. on special occasions. Ticket prices are estimated to be USD $30 for the approximately 38-minute ride.

Empire Outlets, also opening in 2016, will transform a municipal parking lot into a one-million-square-foot retail complex. The Outlets, designed by SHoP Architects, will include 340,000 square feet of prime retail space with up to 125 designer outlet retailers; a 200-room hotel; a 1,250-space structured parking garage; and a 40,000-square-foot food and beverage deck that will provide extraordinary views of the Manhattan skyline.

Other incentives are also under development to attract visitors to Staten Island: the New York Wheel will produce a nightly harbor lights show featuring USD $8 million worth of LED lighting. Local partners such as the Staten Island Yankees, Snug Harbor Cultural Center and the St. George Theater are developing new programming for their venues, including concerts, arts programs and special events.

“New York Water Taxi is committed to its role as a connector of the waterfront. We are very excited about the development going on in Staten Island and want to create an ability for locals and tourists to visit without taking their cars,” explained Brian McCabe, chief operating officer of New York Water Taxi and Circle Line Downtown. “Our mission is to take visitors to see all of the well-known attractions and landmarks, and there is no doubt that the New York Wheel will be one of the most exciting destinations in New York,” added McCabe. The New York Water Taxi pass, which costs USD $30, will make stops in Brooklyn, Lower Manhattan and Midtown as part of its hop-on/hop-off package, which includes the Empire State Building, the Statue of Liberty, the Brooklyn Bridge and Governors Island.

Located in the southwestern part of New York City and home to nearly 500,000 New Yorkers, Staten Island is the City’s greenest borough. It is home to a range of cultural and recreational offerings including Snug Harbor Cultural Center, the Staten Island Zoo, St. George Theater, the Staten Island Yankees and Historic Richmond Town. Staten Island has also served as the backdrop in countless television shows and movies, including NBC’s Law and Order and HBO’s Girls and Sex and the City. For more information, visit newyorkwheel.com or empireoutletsnyc.com.