With its breathtaking landscapes and history steeped in the stories of prophets, kings and Arabic legends, the Sultanate of Oman’s ancient mysticism is almost impossible to define.

Perched on the eastern edge of the Arabian Peninsula, Oman is a breathtaking country of contrast.

The highest point in the region, its tallest mountain range, Jebel Akdar, rises 3000 metres above the sea level – its thickly vegetated slopes are starkly juxtaposed against the dry desert floor below, the barren slopes of the nearby Hajjr mountain chain, the willowy patches of date palm plantations and the beautiful windswept beaches. Then there is the magnificent Grand Canyon of Arabia, a breathtaking arrangement of rocky escarpments, jagged ravines and villages, precariously clinging to cliff faces.

While this geographic diversity is one of Oman’s greatest drawcards, there is plenty to keep visitors’ senses on high alert – ancient fortresses, castles and souks to unearth and a fascinating local culture to uncover. 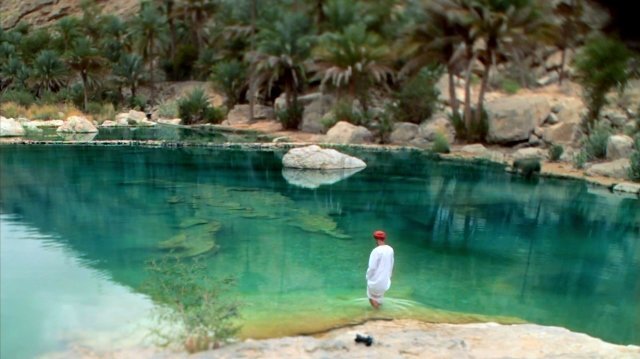 At the heart of Oman is its capital city, Muscat, a mythical metropolis where an age-old way of life exists side by side with modern-day technology and infrastructure.

Grand Mosque: Occupying 416,000 square metres including a main hall large enough for 6,600 worshippers at one time, the Sultan Qaboos Grand is an incredible architectural feat. Opened in 2011, it features 35 Swarovski crystal chandeliers and an intricate 70-metre by 60-metre carpet that took 600 weavers four years to hand-knot.

Muttrah Souk: For an insight into a way of life that has remained largely unchanged through the centuries, head to the Muttrah Souk. A place where people still sell frankincense, silver jewellery, Bedouin handicrafts and spices, it’s the place to unearth hidden Arabian treasures.

The twin forts: Taking pride of place on Muscat’s skyline are its twin forts, Al Mirani and AL Jilali, which sit perched on top of the headlands on either side of the Muscat Harbour. This elevated position means they rise high above most other structures – not only do you get unsurpassed views of the bay and city from here, the history exposed in and around the forts is also fascinating.

Royal Opera House Muscat: The country’s premier arts and cultural venue, the opera house reflects a more contemporary form of Omani architecture. Incredibly, here you can catch world-class operatic performances for a pittance, around $AUD10 – in its first season (2011) the opera house hosted performances by Placido Domingo, Andrea Bocelli, cellist Yo Yo Ma and other leading classical musicians.

While high-rises and skyscrapers dominate the landscape in cities throughout the UAE, Oman has held tight to its traditional Middle Eastern architecture, unique for its blend of Islamic and oriental influences.

Over the years, a spattering of modern buildings, which remain sensitive to Oman’s classic architectural style, have sprung up around Muscat. A longstanding decree by His Majesty Sultan Qaboos however, ensures no building in the city rises more than 10 stories, preserving the marvellous mountain backdrop.

In Muscat: This old walled city is limited by space – crammed between the bay and the jagged rocky mountains, it’s a small yet perfect place to check out old-world Middle Eastern architecture. The Bait al Zubair is an old aristocratic mansion housing displays of Omani craft and traditional costume. Although new, new the Grand Mosque is a spectacular architectural feat, and the twin forts, Marani and Jilali, are excellent examples of Oman’s prowess as a fierce defender of its cities.

Outside Muscat: In the town of Sur the headland separating the sea from the broad lagoon to its south is lined with traditional white houses, a blue-domed mosque, colonnades where white-robed men play games, and ends with an ancient round watchtower.

The Nizwa Fort and Jabrin Castle in Nizwa are must-sees. Nestled at the base of the Hajar Mountains, the town was Oman’s former capital and its primary fort is famous for its round watchtowers that are higher than any other in the country. The recently restored castle, famous for its folklore, magic and wizardry, features detailed latticework, stunning curved arches and hand-chiselled doors.

Situated at the tip of the Musandam peninsula in the far north of the country is the Khasab Fort. Built in the 17th century it over looks the Gulf of Oman and the Hormuz Strait.

The country’s position on the Persian Gulf and Indian Sea once made it a crucial link in the ancient trade routes and UNESCO has recognised four sites for their contribution to the history and evolution of mankind.

Nizwa Falaj Daris: Located in the town of Nizwa, this is the largest of five Falaj, the Omani irrigation system,collectively listed as UNESCO World Heritage sites. Falaj Daris includes five aflaj (singular for falaj) irrigation systems and is representative of around 3,000 similar systems still in use across the country.

Shisr, Sumhuram, Al-Balid, and Wadi Dawkah: This group of archaeological sites represents the production and distribution of frankincense, one of the most important ancient luxury trade items. They are also excellent examples of the Persian Gulf Region’s medieval fortified settlements.

The archaeological sites of Bat, Al-Khutm and Al-Ayn: The area surrounding the settlement of Bat is the most complete and best-known site of the 3rd millennium BC, bearing witness to the evolution of funeral practices during the first Bronze Age in the Oman Peninsula.

Bahla Fort: Immense and now in ruins, the Bahla Fort and its settlement was once a mud-walled oasis set smack bang in the middle of the Omani Desert. It owes its former prosperity to the Banu Debhan tribe, who dominated the central Omani region and made Bahla their capital from the 12th to the end of the 15th century.

GET BACK TO NATURE

The Sultanate of Oman prides itself on its natural beauty and has taken great care in preserving its many natural attractions, which are as diverse as they are rich.

Wildlife parks: Oman has two additional wildlife preservation parks, the Arabian Leopard Sanctuary and Arabian Oryx Sanctuary. Both offer a range of eco-tourism activities where visitors can learn about the unique animals and contribute to funding that will increase awareness and aid in the species’ survival.

Diving: Oman is often listed as one of the world’s top 10 dive spots with scuba enthusiasts the world-over diving deep to experience the country’s unique marine environment. Here, the waters teem with turtles, dolphins and at times, whale sharks. There are wreck-diving experiences, like the 83-metre-long Al Manassir, which lies in just 30m of water, and an abundance of natural coral reefs. Better still, the tropical water temperature rarely dips below 20-degrees Celsius.

Getting there: Oman is just a one-hour flight from Dubai and Abu Dhabi. Both Emirates and Etihad Airways fly direct from their hubs in the UAE. emirates.com; etihad.com

Visa: Australians can obtain a visa for stay of up to 30 days. Ten-day visas cost $RO5 ($AU14) and visas for stays of 10 days or more cost $RO20 ($AU53). One free entry visa is permissible if you’re entering Oman by land from Dubai.

Booking: Check out sidetripofalifetime.com.au for a great range of Oman travel packages starting from three nights and including air, transfers, accommodation and all sightseeing. To further explore, also check out tourismoman.com.au